By Nathan Hardin
nhardin@salisburypost.com
SALISBURY – Pleading guilty for the second time in the shooting of Thomas Vogt Jr., sentencing went as expected for Michael Joseph McDowell Tuesday.
Judge Anna Mills Wagoner accepted a plea deal for second-degree murder offered by District Attorney Brandy Cook in a special session of Rowan County Superior Court. McDowell will serve 11  years to more than 14 years in prison.
McDowell pleaded guilty to assault with a deadly weapon inflicting serious injury with intent to kill in 2007 after he, then-girlfriend Chandaliea Lowder and Jason Ray Sullivan shot Vogt twice in the woods off Russell Farm Road in Enochville.
Vogt survived the gunshots, but was paralyzed. After Vogt died in May 2008, then-District Attorney Bill Kenerly filed new charges against the three, who were serving jail sentences.
Lowder, 34, pleaded guilty to second-degree murder in June. She will serve 14 years to more than 18 years. Her projected release date is Jan. 22, 2021, according to the North Carolina Department of Corrections.
Sullivan pleaded guilty to accessory after the fact of second-degree murder in 2010. The sentence ran concurrent with the previous conviction of assault with a deadly weapon with intent to kill inflicting serious injury in 2005.
Sullivan served time and has been released.
In September 2005, a resident heard gunshots then saw Lowder, McDowell and Sullivan leaving the area. The resident later located the 18-year-old Vogt partially buried in brush in the woods.
McDowell, 38, could have been sentenced up to 40 years in prison, Wagoner said.
But his family – a support system in the community – was counted as a mitigating factor. That lowered his sentence and placed it in the lowest of the three possible ranges.
He will also be given credit for the time he has served since his 2007 plea deal and the time he spent in jail prior to the initial plea arrangement.
During a final statement before sentencing, McDowell’s attorney, David Bingham, told the court McDowell has had few infractions in prison.
He said, contrary to a written statement by Sullivan, McDowell was not aware Lowder intended to shoot Vogt.
Bingham said McDowell believes he is guilty of being an accessory, not a murderer, but accepted the deal rather than continue with the lengthy litigation.
“Mr. McDowell is a, in my opinion, a good guy who got himself in a terrible circumstance, made some terrible decisions. He acknowledges that,” Bingham told the court.
McDowell, clad in an orange Rowan County Detention Center jumpsuit, answered only yes and no to Wagoner’s standard plea questions.
He did not make a statement before sentencing.
Friends and relatives of McDowell sat on the right side of the courtroom. They were among about a dozen people in court.
One female family member was escorted by a bailiff out of the courtroom during the proceedings after vigorously shaking her head in disagreement as the judge read out the possible sentence ranges.
As McDowell left the room, he pointed an index finger from his handcuffed fists at a woman in the front row and appeared to mouth “Love you.”
The hearing lasted a little more than 30 minutes.
Vogt’s father, who spoke at Lowder’s plea hearing, was expected to be in court, Cook said, but he was unable to come.
Thomas Vogt. Sr. gave a brief, but emotional, statement in June, Cook said.
The district attorney read statements from Sullivan, Lowder, McDowell and the witness who found Vogt.
Cook told the court the incident began after Lowder accused Vogt of molesting her child.
She said Lowder then lured Vogt on a four-wheeling trip to Enochville with her and the two men.
When they got far enough into the woods, Cook said, Lowder shot Vogt once with a .22 caliber handgun.
After a few seconds, she shot him again.
Cook said the child abuse claim should have been reported to authorities and investigated.
“Instead,” Cook said, “these individuals took the law into their own hands.”
Contact reporter Nathan Hardin at 704-797-4246. 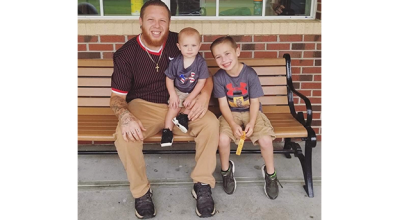 Cooper no fan of energy bill