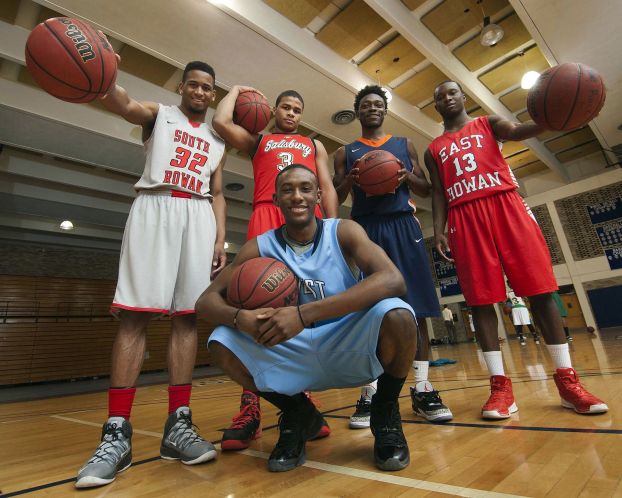 SALISBURY — The toughest calls on the all-county boys team were South Rowan and Salisbury.
Based on their seasons — South was 9-15, while Salisbury was 11-14 and lost its last seven — SR and SHS were going to get one slot each on a 12-man all-county team that was going to be mostly North (21-6) and Carson (17-12), teams that enhanced good regular seasons with strong playoff runs.
If you had to pick five Rowan guys to go play the Cabarrus or Davidson County all-stars, you’d take North’s Michael Connor, Jalen Sanders and Michael Bowman and Carson’s Tre Williams and Colton Laws.
Still, it’s not like Salisbury and South had no players. South had three — Qwan Rhyne, Shawn Spry and T’Vadis Graham-Wesley — who likely all would’ve been all-county if South had been 15-9 instead of 9-15. Salisbury had three who were hard to separate in sophs D.J. Alexander, Corban Usry and Deshawn Troutman.
Rhyne and Usry were named to all-conference teams by coaches. Wesley and Alexander got the all-county nods. Not everyone will agree, obviously, but there hasn’t ever been an all-county team that made 100 percent of the world happy.
Twelve players. Six schools. That’s two per team, and not everyone will get two when one team plays for the state championship.
Player of the Year Connor, Laws and Williams are all-county for the third time.
This is the second all-county selection for Bowman, West Rowan’s Celexus Long and Seth Martin and East Rowan’s Donte Means.
The team:
Michael Connor, North, Sr. — Connor averaged 16.8 points per game and added tons of leadership and defense. He had three huge second halves in playoff wins and earned district player of the year and CCC Player of the Year accolades.
Tre Williams, Carson, Sr. — Carson’s floorleader started the season with a 37-point outburst and closed it with 28 in an overtime playoff loss. He averaged 16.7 ppg. He scored 1,265 career points and his strength made him a tremendous rebounder for his height.
Colton Laws, Carson, Sr. — The tall guy is a baseball player first, but he gave the Cougars a tremendous senior basketball season and led the county with 18.3 ppg. Laws was held under double figures only once in 29 games. His 530-point season was second in school history to Darius Moose’s 539 in 2009-10. He finished his career with 1,261 points.
Jalen Sanders, North, Soph. — Such a talented guard he’s already getting D-I attention. He directed North and scored in double figures in 24 of 27 games. He scored 20-plus five times, including North’s epic win at top-ranked Shelby. He averaged 14.2 ppg.
Michael Bowman, North, Sr. — Just a really solid all-round player. Physical, smart and tough, and he’s a pretty good shooter. Bowman came up big at the biggest times and was Christmas tourney MVP and Western Regional MVP, He averaged 13.4 ppg. and surpassed 1,000 career points with a fine effort in the state-title game.
Donte Means, East, Sr. — Means carried an offensively challenged East team frequently. He scored in double digits in 18 of 22 outings and averaged 14.9 ppg.
Seth Martin, West, Sr. — The county’s top long-range shooter, Martin led West in scoring with 13.0 ppg and was very consistent outside of a brief struggle in the Christmas tournament. Martin had a career-best 28 in the playoff loss to 3A state champion Freedom.
T’Vadis Graham-Wesley, South, Sr. — He’d get votes as the most athletic player in the county, and there were nights when he made jaws drop with his blocked shots and dunks. He also was a better shooter than most realized and capped his career with outings of 22 and 23 points. He averaged 11.3 ppg.
Marquez McCain, Carson, Jr. — One of the county’s quickest players, McCain got to the rim often enough to average 10.1 ppg. He finished strong, averaging 12.9 ppg. in his last 10.
Celexus Long, West, Jr. — Long didn’t have as huge a season as West fans hoped, but the sweet-shooting guard still averaged a solid 11.9 ppg. He lit up Hickory Ridge twice — for 26 and 30 points.
Kenyon Tatum, North, Sr. — The Davie transfer’s rebounding effort against Lexington in the CCC tournament championship was one for the ages. He gave North a tough, athletic presence inside even on nights when he didn’t score much. He averaged 7.7 ppg.
D.J. Alexander, Salisbury, Soph. — At 6-foot-4, his wide body is combined with nimble footwork, and he presents matchup problems. He averaged 10.0 ppg. and topped 20 points twice. While he wasn’t the most spectacular member of the Hornets’s strong sophomore class, he probably was the steadiest.