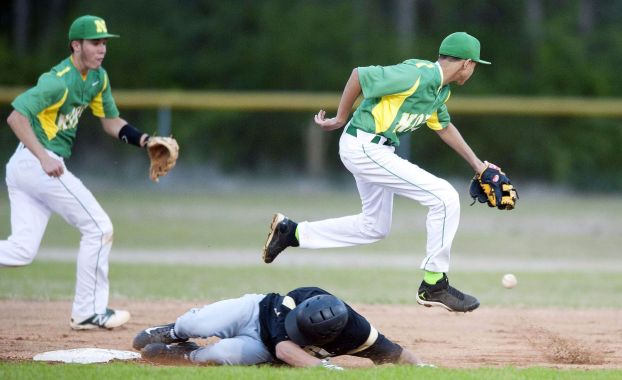 SPENCER — The most exciting CCC baseball race may be for second place.

Defending champion East Davidson looked awfully solid on Tuesday night and stayed unbeaten in the league with a 6-1 win over a North Rowan team that hoped to challenge the Golden Eagles.

Nathan Campbell had three hits and three RBIs for the Golden Eagles (9-4, 5-0), while Ryan McIntyre dominated on the mound with a complete game and 10 strikeouts.

“Like everybody else in the state, we struggled early because of the weather,” said East coach Dan Tricarico, who piloted East Davidson to a state championship 15 years ago. “But we beat an undefeated team last week (Southern Guilford), and that’s got us on track to playing pretty well.”

The visitors opened the game with a groundball single and a bunt single against North left-hander Brandon White.

“We had some bad luck right away, and that got us back on our heels some,” Rimer said.

When Campbell slapped a single to right, East Davidson broke on top, and cleanup man McIntyre’s single made it 2-0 just four batters into the contest.

“We work a lot in cage on hitting lefties,” Campbell explained. “If you try to pull that guy you’re going to roll over and hit a weak groundball, so you have to go up there thinking about hitting backside, and that’s what I did.”

North got a run back in bottom of the first. Jake Pritchard, North’s catcher, drilled a double and scored when Campbell couldn’t make a lunging play in left field on Spencer Locklear’s liner.

“Their pitcher was a curveball freak,” Pritchard said. “He had a real good curve, and he’d throw it in any count. I took a curveball on that first at-bat, then I hit a high fastball for the double.”

Some North defensive struggles around a double by Campbell gave East Davidson a 4-1 cushion in the third, and Kelvin Pena’s infield single got a run home in the fourth for a 5-1 lead.

“Actually, Brandon was throwing the ball very well,” Pritchard said. “There were just some routine plays that we didn’t make for him. We didn’t charge some balls hard enough — in the infield and the outfield.”

The pivotal inning was the North fourth. There were two major arguments in that half inning that had both Tricarico and Rimer steaming.

Javin Goodine opened the inning by lashing a double to right-center. Henderson Lentz followed with a bloop down the left-field line that appeared foul but was initially ruled fair. Goodine charged home, Lentz pulled into second, North fans cheered, and the scoreboard changed to 5-2.

But that call was reversed after lengthy discussion. Goodine returned to second base, but Lentz walked and then White bunted down the third-base line. After a bang-bang call went North’s way, North (5-7, 3-2 CCC) had the bases loaded with none out, and it was Tricarico’s turn to howl at the umpires.

McIntyre settled the outcome right there, though. With the tying run at the plate for the Cavs, it was strikeout looking, strikeout swinging, and then strikeout looking. McIntyre’s third strikeout of the inning came against North leadoff man Chance Mazza, who is hitting .500.

“The call on the foul ball that went against North had them really fired up, so for McIntyre to strike out the side there was just huge,” Tricarico said.

Rimer agreed that was the defining moment in the game,

“It hurt to have a run taken off the board, but then we load the bases with no outs and we’ve got all the momentum in the world on our side,” he said. “The bottom line is we’ve got to do something right there — and we didn’t. Tip your cap to their pitcher.”

The only run that scored after McIntyre’s statement inning was one the Golden Eagles got in the sixth when future Catawba Indian Nick Williams and Campbell hit back-to-back triples to knock out White.

Cory Fries got the last out in the sixth and retired East Davidson in the seventh, but North couldn’t rally. McIntyre retired the last seven Cavaliers in order.

“He’s getting it done for us,” Campbell said.