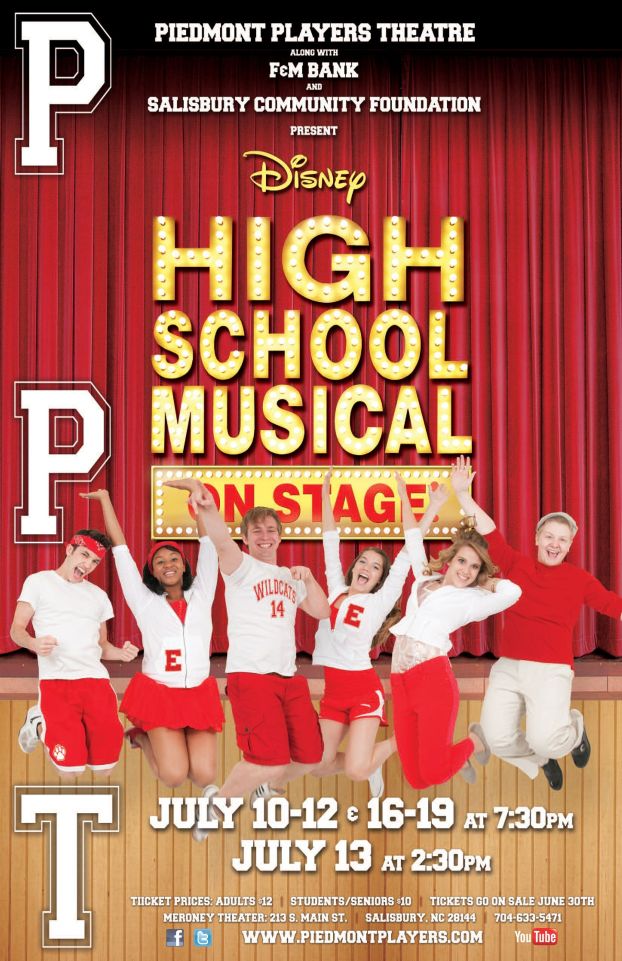 Disney Channel’s smash hit movie musical comes to life on the Meroney stage!
Troy, Gabriella and the students of East High must deal with issues of first love, friends and family while balancing their classes and extracurricular activities.
“High School Musical” is the most successful film that Disney Channel Original Movie ever produced.
The soundtrack was the best selling album in the United States and the film was Disney’s most watched film of the year.
Disney’s “High School Musical” is fun for the whole family.
The director/choreographer for the show is Gwen Matthews, music director is Aubrey Barton and stage manager is Dante Cataldo. Producing Partners are F&M Bank and Salisbury Community Foundation.
PPT’s special promotion, Summer Swap, means that the youth production, “High School Musical,” will be performed in the Meroney Theater at 213 S. Main St., while the next regular Piedmont Players’ production, “Look Homeward, Angel” — show dates July 24 through Aug. 2 — will take place in the Norvell Theater at 135 E. Fisher St.
Want to go?
What: Disney’s “High School Musical”
When: July 10-12 and 16-19 at 7:30 p.m.;
July 13 at 2:30 p.m.
Where: Meroney Theater, 213 S. Main St.
How much: Adults $12, Seniors and Students $10
Contact: www.Piedmont Players.com
or 704-633-5471