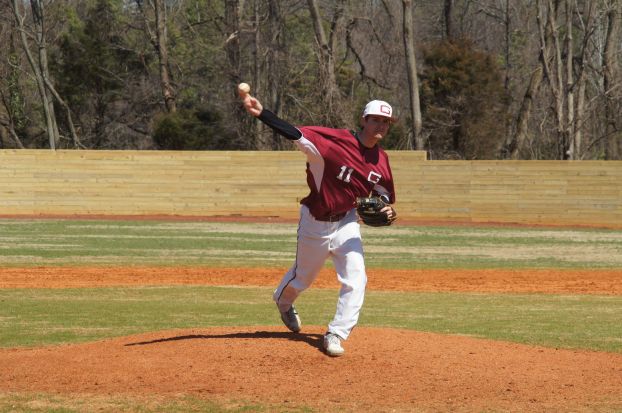 KERNERSVILLE — East Rowan graduate Avery Rogers doesn’t want to make too big a deal about it, but he admits that the radar-gun readings being produced by his maturing right arm are exciting.
Rogers, a talented guitarist, had been planning on a music career or law school, but now it appears his baseball life could extend beyond college.
“I’m sitting in that 90-92 range with the fastball now,” said Rogers, a rising senior at Guilford who is playing for the Kernersville Bulldogs wood bat team this summer.
And there are nights when Rogers is throwing even harder than 92.
The Bulldogs compete in the Carolina-Virginia Collegiate League, but they tackle a busy schedule that has included seven games against Coastal Plain League teams. They also take on some showcase teams and they even played an exhibition game against minor-league pros.
In that game in June against the Burlington Royals, a Kansas City farm club, Rogers was clocked at 94.3 mph and struck out a teenager who was the 40th pick in last month’s draft.
“That 94.3 meant something because I was clocked with the pro gun,” Rogers said.
Rogers was a good high school player at East, although as had been the case with Bobby Parnell nine years earlier, he made a much bigger impact for the Mustangs as a third baseman than as a pitcher
As a senior in 2011, Rogers batted .342 with 21 RBIs for the Mustangs, but he went 1-2 on the mound for a team whose pitching staff was anchored by Bradley Robbins, Alex Bost and reliever Will Johnson.
Still, coach Brian Hightower raved about Rogers’ hurling future and told everyone who would listen that’s what he would do in college.
“But I was throwing 80s in high school, 84 tops,” Rogers said.
Rogers is a good student. Guilford, a Division III school where academics are the prioriity, recruited him for its baseball program.
Rogers was the regular third baseman for the Rowan County Legion team in the summer of 2011, following his senior year. He batted .260 with 14 RBIs for the team that finished third in the state tournament in Morehead City. He pitched just 11 innings and went 0-1.
Rogers was hopeful of being a position player at Guilford, but Guilford coaches saw the same things Hightower had. Here was a long, lean, 6-foot-3 guy with a loose arm and a pitcher’s frame.
Rogers was far from an overnight success in college. As a freshman for the Quakers, he had some shoulder tightness. He threw 24 innings and went 1-1.
He was still Legion eligible age-wise in the summer of 2012, He was a third baseman for coach Jim Gantt’s Rowan team, and then he became the first baseman after Chance Bowden got hurt. He also experienced sustained pitching success for the first time. He was 5-2 for a 20-20 team. He had an ERA of 0.62, one of the lowest ever recorded for the program, and whiffed 55 batters in 44 innings.
He returned to Guilford for his sophomore year, eager to build on that success, but he only pitched 11 innings all season and his ERA was 9.28.
“We had about 30 pitchers, I wasn’t throwing a lot of innings, and it just didn’t look like college baseball was going to work out for me,” Rogers said.
He stayed with it, though, and things started to click late in his junior year when Rogers was placed in the closer’s role. He won one and saved two. He struck out 17 in 13 1/3 innings and was one of three Guilford players named to the college division All-State team.
“We’ve got good coaches at Guilford, although we work a lot more on team-oriented stuff than on individual development,” Rogers said. “But I started adding velocity in college, and I think the biggest part of that was just gaining a lot of leg strength because we run all the time. I know I’m older and stronger now, but my weight (170 pounds) hasn’t really changed much.”
Rogers’ growth has continued with the Kernersville team this summer. Kernersville is coached by Dustin Ijames, whose father Dale Ijames, a coaching legend, is the general manager.
Kernersville (26-6) is very strong with a lineup that includes Catawba masher T.J. Wharton and former East Rowan shorstop Ashton Fleming, who had played two years at Surry Community College. The Bulldogs often win big, so there haven’t many save opportunities.
“A lot of 10-run lead and seven-run leads,” Rogers said with a laugh.
Rogers has still managed to put up nice numbers. He’s pitched seven times with a 1.91 ERA and has struck out an eye-popping 20 batters in 11 innings.
“I threw 10 straight fastballs for strikes in a game the other night,” Rogers said.
On July 1, Rogers faced three batters and struck out the side. The radar gun registered 93s.
In another game against the Forest City Owls of the Coastal Plain League, Rogers struck out the side to strand runners at second and third.
Rogers is not all about fastballs. He’s gotten outs at Guilford with his slider, and his changeup is developing. His senior year at Guilford should be his best one. Assuming good health, he figures to be in the starting rotation or in the closer role. He’ll be a key guy either way.
A bonus of pitching for Guilford is that Nathan Fulbright, Rogers’ teammate at East, is often his catcher.
“Nathan is our best offensive catcher, but even if he’s not starting, they’ll usually put him in the game to catch me,” Rogers said. “We’ve got a chemistry.”
As far as baseball beyond Guilford, Rogers has a chance, but those things usually come down to being seen by the right guy at the right time.
“You need a lot of luck to get an opportunity,”Rogers said. “We’ll just have to see what happens.”

chase vallot
Rogers, who graduated from East Rowan in 2011, went on to Division III Guilford where academics take priority over baseball.