Connecticut is an uphill battle 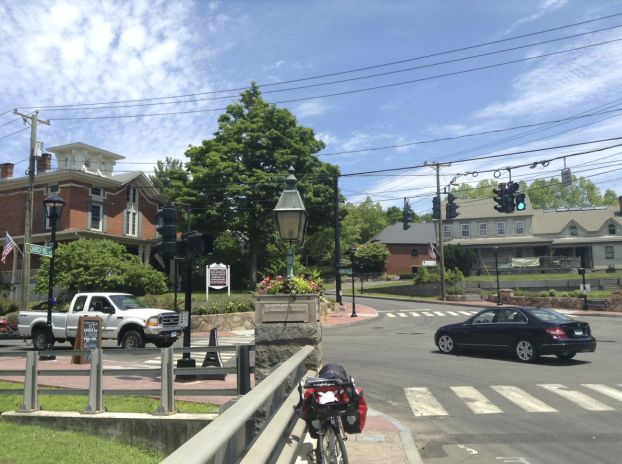 A good night’s sleep didn’t fix my dilemma on how to proceed through the rest of Connecticut today. I had several ideas, but no experts had weighed in except for Mapquest. I have to travel on non-highway roads, meaning no interstates and major highways. So off I went following about 20 expected turns. The third turn on the list wasn’t there, so I was immediately reduced to verbally assuring myself that I was headed in the right direction. Sometimes I couldn’t tell.

Headed east out of Meriden, Conn. took me through a long downtown area. Thankfully Karen kept me on track when I saw her early this morning. She laughed and said, “You have a couple of mountains to climb!” I laughed back and thought, “Of course.” She was right, but I made it out of town.

Then, I headed over to Waterbury, another bigger town. My plan went a little awry here as I ended up on the wrong end of town and had a long ride to get to the right place. I used Meriden Road and Hwy. 322 to this point. As I have learned when needing directions, find a tow truck driver. I did and started making headway.

There was a bike shop named for the owner, Bobby Sprocket, just past Waterbury. We talked a little bit about my plans and he concurred that things seemed in order.

My goal was to get to Danbury, Conn. and make a bunch of calls on how to proceed. After about ten more turns, crossing Interstate 84 several times, spending a little bit of time at Lake Zoar and a huge old bridge, I was making better time.

Having no idea what towns were along the way, except for the bigger ones, I was amazed to ride into Sandy Hook. The town is nothing as it looked on TV during the school tragedy. It is very small, historical town, situated around a scenic river.

As I left town, climbing yet another killer hill, I rode into Newtown, Sandy Hook’s next door neighbor. At this point, I was supposed to be following route 6. I spotted Police Officer Lenny Penna. He got me back on track and rode with me to show how to lessen the impact of the next hill. Officer Penna rides his bike for two months each summer during tourist season.

After leaving Newtown, I headed on Route 6 into Danbury. With more directional support from two great firefighters and Tanisha Watson, I made to my motel for the night in Mill Plain, just ahead of a hard downpour.

I am about two miles from the New York State line and seven from Brewster, NY. I have in mind a big and long day tomorrow. There will be a lot of uncertainty with it, which I will explain later.

Today was another 60-mile day, but less than that in the right direction. I am very excited to head into New York. The first nine days of my ride have been even more than I hoped for. Thanks for following along.