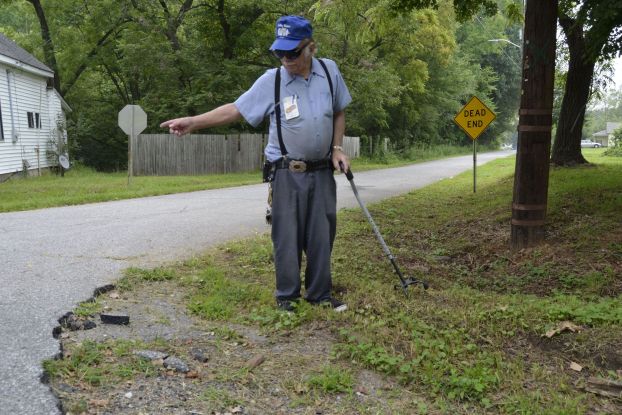 East Spencer: All streets need to be paved, but not enough funding is available

EAST SPENCER — Gary Wallace has lived on East Torbush Street for 24 years. The military veteran says he can’t recall in that time when the street was completely paved.
Wallace walked carefully down Torbush Street with the aid of a three-footed cane to show a Post reporter the uneven and cracked places along the street.
Town officials said at a recent meeting they’d like to see streets like Torbush receive a complete paving. However, there just isn’t enough money available, locally or through the state, to pave every street.
F.E. Isenhour, head of public works, said the town does not have a list of streets, but will be in the process of making one.
When asked if there were streets that were worse than others, Isenhour said all of the streets should be repaved.
There are two state roads in East Spencer — Long and Andrews streets.
At its meeting this week, the board identified three streets — Broad, Cedar and Long — that need to be addressed, along with Pine Tree Drive and Correll Street.
Isenhour said he’s been talking with state officials to see how they can stretch some patching material.
The amount of state Powell Bill funds has decreased over the years, Isenhour said.
Those state funds cover road projects like paving or construction of bikeways, greenways or sidewalks.
He said the money pulled from Powell Bill funds has not grown, but the towns that need the funding have.
“When we don’t have money, we have to do with what we have,” Isenhour said.
With what the town has available, Isenour said it would only be able to resurface a few blocks.
He said the town has in the past received about $50,000.
He doesn’t know exactly how far that amount will last with so many streets that need to be addressed.
“The state is talking about a different type of surfacing that would be less expensive for roads that don’t have heavy traffic. It would serve us well,” Isenhour said.
Isenhour said he understands concern from residents like Wallace who say their street needs to be paved.
The staff will make recommendations to the board and the board will make a final decision on which streets will receive patching or repaving.
Isenhour explains why Broad and Cedar streets will likely be placed on the list because those streets had sewer work done. Those two streets have a lot of dips and parts where the road was cut, he said.
Wallace said all the town cares about paving is Long Street, which is a major thoroughfare and is also a state maintained road.
Wallace says he’s recommended to the board to repave Torbush Street, but “nothing has ever happened.”
He says the entrance into the road has been torn away by large delivery trucks.
The end of Torbush Street was paved by a resident, but Wallace said the entire length of the street needs to be paved.
The town will have to create a list of streets in need of repair, accept bids on paving and hire a contractor.
“Every year we’ll do a little bit more,” Isenhour said.
Contact reporter Shavonne Potts at 704-797-4253.