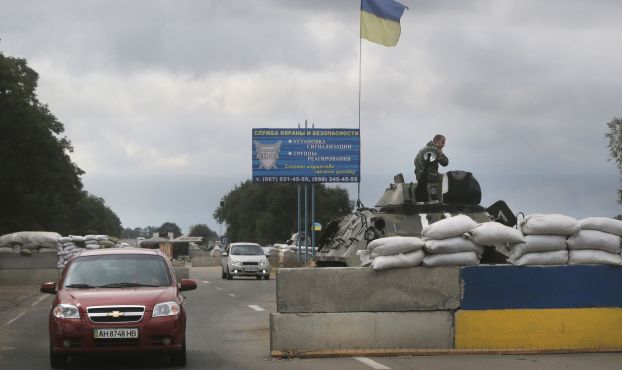 NOVOAZOVSK, Ukraine (AP) — Ukraine accused Russia on Thursday of entering its territory with tanks, artillery and troops, and Western powers said Moscow had “outright lied” about its role and dangerously escalated the conflict.
Russia dismissed the allegations, describing the fighters there as “Russian volunteers.” The Kremlin has repeatedly denied arming and supporting the separatists who have been fighting Ukrainian troops for four months in the gravest crisis between Russia and the West since the end of the Cold War.
NATO said at least 1,000 Russian troops are in Ukraine and later released what it said were satellite photos of Russian self-propelled artillery units moving last week.
Two columns of tanks and other equipment entered southeastern Ukraine at midday, following heavy shelling of the area from Russia that forced overmatched Ukrainian border guards to flee, said Col. Andriy Lysenko, a spokesman for Ukraine’s national security council.
“Russian forces have entered Ukraine,” President Petro Poroshenko said in Kiev, canceling a foreign trip and calling an emergency meeting of his security council.
He urged Ukrainians to remain calm.
“Destabilization of the situation and panic, this is as much of a weapon of the enemy as tanks,” Poroshenko told the council.
U.S. President Barack Obama spoke with German Chancellor Angela Merkel, and both leaders agreed Russia must face consequences for its actions.
“We agree — if there was ever any doubt — that Russia is responsible for the violence in eastern Ukraine,” Obama said. “The violence is encouraged by Russia. The separatists are trained by Russia, they are armed by Russia, they are funded by Russia.”
He added that Russia “has deliberately and repeatedly violated the sovereignty and territorial integrity of Ukraine, and the new images of Russian forces inside Ukraine make that plain for the world to see.”
But Obama ruled out a military confrontation between the U.S. and Russia. He said Russia’s activity in Ukraine would incur “more costs and consequences,” though these seemed to be limited to economic pressure that will be discussed when Obama meets with European leaders at a NATO summit in Wales next week.
At an emergency session of the U.N. Security Council, Western representatives expressed outrage.
“Now we see irrefutable evidence of regular Russian forces operating inside Ukraine,” said British Ambassador Mark Lyall Grant.
U.S. Ambassador Samantha Power said Russia “has manipulated. It has obfuscated. It has outright lied.”
Russian Ambassador Vitaly Churkin offered a spirited defense, saying Kiev “is waging war against its own people.”
He did not deny the Russian presence, saying “there are Russian volunteers in eastern parts of Ukraine. No one is hiding that.”
But Power countered: “A Russian soldier who chooses to fight in Ukraine on summer break is still a Russian soldier.”
Churkin questioned the presence of Western advisers and asked where Ukrainian troops were getting weapons. He said he wanted to “send a message to Washington: Stop interfering in the internal affairs of sovereign states.”
Russian stock markets fell as Switzerland joined the European Union in imposing restrictions on Russian state banks and fears grew that the U.S. and EU could impose more sanctions on Russian businesses and individuals in response to the military escalation. Russia’s MICEX index dropped nearly 2 percent on Thursday, and major Russian state banks VTB and Sberbank dropped more than 4 percent.
The strategic southeastern town of Novoazovsk, which has come under shelling for three days, appeared to be in the control of separatists, creating a new, third front in the war. That raised fears they want to create a land link between Russia and the Crimea Peninsula, which Moscow annexed from Ukraine in March. The town lies along a road connecting the peninsula to Russia.
Lysenko said the missiles from Russia were fired at Ukrainian positions about 11 a.m. About 90 minutes later, two columns, including tanks and other fighting vehicles, began an attack, entering Ukraine from Veselo-Voznesenka and Maximovo in the Rostov region of Russia, he said.
A senior NATO official said the estimate of 1,000 Russian troops in Ukraine was a conservative one, adding that another 20,000 Russian troops were right over the border. The troops who entered Ukraine had sophisticated equipment, he said.
“The hand from behind is becoming more and more overt now,” Brig. Gen. Nico Tak said at NATO’s military headquarters.

Russia’s ultimate aim was to stave off defeat for the separatists and turn eastern Ukraine into a “frozen conflict” that would destabilize the country indefinitely, he said.
Russia’s ambassador to the EU, Vladimir Chizhov, told the BBC that “NATO has never produced a single piece of evidence” of Russian troops operating in Ukraine. He said the only active duty Russian soldiers in Ukraine were the 10 captured this week, who Moscow insists had mistakenly wandered across the border.
Speaking in Casteau, Belgium, Tak said that in the past two weeks, “we have noted a significant escalation in both the level and sophistication of Russia’s military interference in Ukraine.”
“Russia is reinforcing and resupplying separatist forces in a blatant attempt to change the momentum of the fighting, which is currently favoring the Ukrainian military,” he added.
NATO also produced satellite images to provide what it called additional evidence that Russian combat soldiers, equipped with sophisticated heavy weaponry, are operating inside Ukraine’s sovereign territory. The grainy images of the terrain near Krasnodon, Ukraine, showed what appeared to be a convoy of military units with artillery, and NATO said it had “confidence the equipment is Russian.”
“This is highly sophisticated weaponry that requires well-trained crews, well-trained command and control elements, and it is extremely unlikely that this sort of equipment is used by volunteers,” Tak said.
He said the satellite images were only “the tip of the iceberg” in terms of the overall scope of Russian troop and weapons movements.
Asked about the NATO images, Russian Defense Ministry spokesman Maj. Gen. Igor Konashenkov said in a statement to Russian news agencies that “to comment on this seriously just makes no sense.”
Southeastern Ukraine had previously escaped the fighting that has engulfed areas to the north, and the only way rebels could have reached the southeast was by coming through Russia.
If separatists create a land corridor from Russia to Crimea, it could give them or Russia control over the entire Sea of Azov and the gas and mineral riches that energy experts believe it contains. Ukraine already lost roughly half its coastline, several major ports and significant Black Sea mineral rights in Russia’s annexation of Crimea.
In Mariupol, a city of 450,000 people about 30 kilometers (20 miles) west of Novoazovsk, a brigade of Ukrainian forces arrived at the airport Wednesday, while deep trenches were dug a day earlier on the city’s edge.
National guard spokesman Ruslan Muzychuk told Associated Press reporters in the city that the government has evidence large amounts of weapons have been brought into Novoazovsk from Russia.
He added that national guard reinforcements were taking up positions in Mariupol.
“The positions are being strengthened,” the spokesman said. “The road from Novoazovsk to Mariupol is under the control of Ukrainian troops.”
AP journalists on the border have seen the rebels with a wide range of unmarked military equipment — including tanks, Buk missile launchers and armored personnel carriers — and have encountered many Russians among the rebel fighters.
In Donetsk, the largest rebel-held city, 11 people were killed by shelling overnight, city officials said.
The leader of the insurgency, Alexander Zakharchenko, said in an interview on Russian state TV that up to 4,000 Russians have fought on the separatist side since the armed conflict began in April.
———
Heintz reported from Kiev, Ukraine, and Casert reported from Casteau, Belgium. Also contributing were Peter Leonard in Mariupol, Ukraine; Laura Mills and Lynn Berry in Moscow, Bradley Klapper in Washington; and Cara Anna and Trenton Daniel at the United Nations.