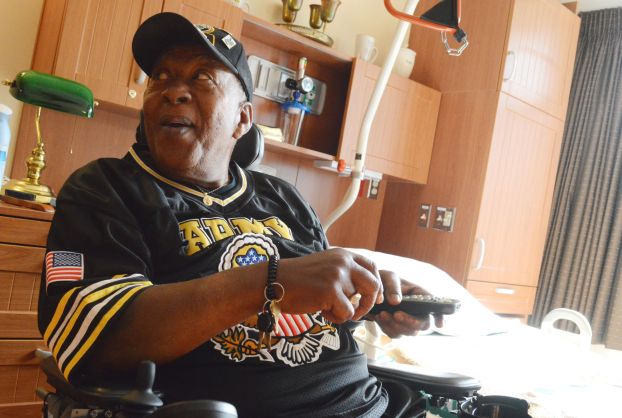 The W.G. (Bill) Hefner Medical Center is about one-third of the way through with its extensive $24 million renovation of a Community Living Center, with veterans already living in a portion of the building.
The latest completed renovation, located in building 42, opened in July and was named The Outer Banks Neighborhood. The newly opened area is home to 22 extended stay rooms, called suites.
Just after opening the Outer Banks, the VA hospital began renovating another wing of building 42 with plans to complete it in 15 months. A third wing of building 42 will be renovated shortly afterward.
The remaining two phases include plans to make all veteran rooms private with private bathrooms, and will add a recreation and therapy center and other amenities, according to VA hospital spokeswoman Carol Waters.
Though it was completed just a short time ago, patients have already begun moving into the Outer Banks neighborhood, part of the Hefner VA’s geriatric and extended care unit. Patients are placed in specific communities based on medical needs, according to Eddie Palmer, an administrative officer overseeing building 42.
One of the new Outer Banks residents is Henzly Harrison. Harrison began his stay at the hospital about a year ago and moved into the new wing shortly after it opened.
Much like an apartment, Harrison’s room is adorned with a TV, stereo and several plaques and pictures. On Thursday, Harrison — nicknamed Happy — was playing his stereo loud and proud and smiled as he showed off his room.
One of the benefits of the renovations is increased privacy, he said.
“It’s like having your own apartment,” he said. “It feels like you have your own place instead of being in a group or something.”
Harrison said he also frequents an area just a few hundred feet away called Main Street, which was part of the first phase of renovations. It’s a large, indoor courtyard-like area, with a movie theater, small shop and town hall room. Main Street is also slated to get a barber shop, Waters said.
Harrison talked about the community in the new wing as more of a family and less like a group of patients waiting for care.
“There’s a unity here, and there’s a family here,” he said. “It’s almost like being in the military and we all were brothers. We’re one here and we look out for one another. The staff looks out for us, and we look out for the staff, believe it or not, even though they try to tell us what to do.”
Palmer said adding individual rooms helps with providing specific care to each patient.
“As a veteran myself, I like to see our veterans being taken care of,” Palmer said. “I think that individualized care helps them with their ultimate goals of going home one day, being better mentally and being better physically.”