Hercules and the hospital on Horah 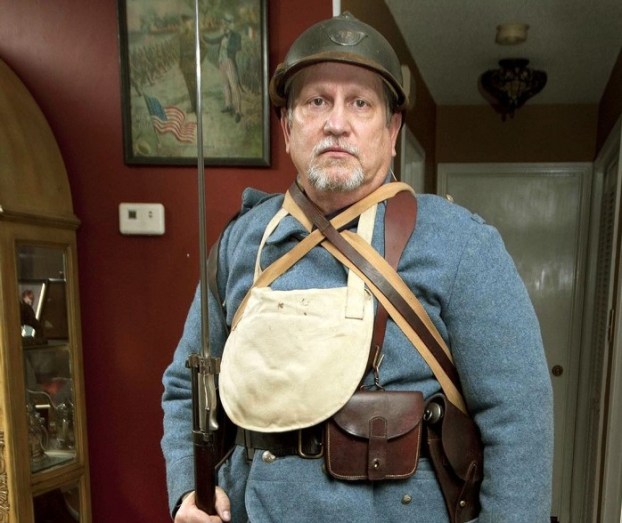 JON C. LAKEY / SALISBURY POST Tim Arey takes his time putting on all of the many layers of items that a typical French infantryman would wear during time spent fighting trench warfare during the first world war. Arey had joined a small group of individuals that represent the French during the WWI reenactments. Monday, November 3, 2014, in Granite Quarry, N.C.

GRANITE QUARRY — As you watch Tim Arey put on his tools of war — World War I, to be exact — you wonder how he moves.

As he often does this time of year, Arey is preparing for a trip to Newville, Pa., where the Great War Association welcomes several hundred reenactors reliving history at a place that mimics a portion of the Western front — as it appeared around 1917 or 1918.

But Arey doesn’t go as an American doughboy.

He dresses instead in the layers of a chasseur, a French alpine soldier specially trained for mountain warfare. In his kitchen at home, Arey dons a dark blue tunic — a short coat — then covers that with a woolen, horizon blue overcoat.

The Germans hated these particular French infantrymen, grudgingly respecting their bravery and tactics and calling them “The Blue Devils.”

Why are the French sometimes referred to, maybe not endearingly, as the Frogs? “When you put the gas mask on,” Arey says, “you look like a frog.”

He’s right. Arey then hoists on a leather utility belt, holding an original .38-caliber French revolver and a needle bayonet blade. The belt weighs about 15 pounds and has straps that wrap over the shoulders to keep things in place.

There’s more — bread pouches that held the soldier’s mess kits and ammunition go around Arey’s neck. He has an original beret the French soldiers would wear at times instead of their helmets, which came along in 1915.

He makes room on his body for a canteen, and Arey also picks up a wooden cane or walking stick the Alpine soldiers often relied on in the mountains.

He decides not to pull on the backpack nearby that holds his bed roll, mess tin and a boiler — a tin pan for cooking.

“Whenever you’re putting on combat gear, it’s good to have a buddy,” Arey says. “… It takes you awhile to get used to all the weight.”

He wears leggings to keep dirt, briars and foreign objects out of his shoes, which also are attached to his backpack and are original. The going rate for those kinds of shoes in the military memorabilia world are about $300, Arey says.

In Newville, Arey will be carrying his 1907 French model rifle, which has a six-round clip. “The French weaponry was not very good,” Arey says.

For the World War I reenactments, some of the participants bring their vintage machine guns. Everyone, including Arey, are shooting blanks, of course.

World War I ushered in dramatic changes in the way wars were fought, due in large part to the advances in weaponry and changes in strategy.

“This was a horrific time period in our history,” Arey says.

Arey, 54, retired from the city of Salisbury three years ago after a 28-year career in the street and water-sewer maintenance department. Before that, he worked five years for his late father, well-known local stone mason J.C. Arey, and Tim is an accomplished mason himself.

Arey participated in his first reenactment in 1987, starting with the Civil War, which remains by far the most popular war among reenactors.

“I’ve always liked history, and it sort of branched out from there,” Arey says.

Over time, Arey also became involved in Revolutionary War, World War I and World War II re-creations. He made his first trip to Newville in 1988. The Great War Association, which strives to keep the history of World War I alive, offers its reenactments twice a year — usually the first or second weekend in November and the weekend after Easter.

In the beginning, Arey participated in the World War I affairs as part of the Old Hickory Association from North Carolina. Only one guy usually showed up dressed as a chasseur, but Arey became fascinated with the story behind these French Alpine troops and eventually fell in with an enthusiastic unit, led by Brett Johnson of Maryland.

“The Blue Devils were active in pursuing the Germans, and the Germans feared them,” Arey says.

To be part of the Alpine troops, Arey naturally had to start finding and buying all the French clothing, equipment and weaponry. It led to trips to flea markets and military memorabilia shows, besides searches on the internet.

For Arey, great friendships grew out of the French unit and the World War I reenactments in Newville. He visits regularly, for example, with Jim Crocker of Spartanburg, S.C.

The French unit also found itself in demand for movies, including a World War I scene in “Twelve Monkeys,” starring Brad Pitt and Bruce Willis.

Arey said he and his fellow chasseurs were part of filming for the movie over two nights in the Baltimore area. As part of the story, Willis’ character travels back in time and suddenly finds himself naked in a World War I trench with French soldiers running through.

“I got to see Bruce Willis face-to-face,” Arey says. “In fact, I got to see more of him than I wanted to.”

Arey holds a great interest in World War I. He says the best books to read about that time in history include, “All Quiet on the Western Front,” “Paths of Glory” and “War Horse.”

Arey took a long break from reenactments when he bought a house in 2001 and married in 2005. Since retirement and a recent divorce, he has been busy helping his sister restore their parents’ house on Faith Road, doing some stonework and also easing back into his reenactments.

He can’t wait for this weekend trip to Newville.

“People I haven’t seen in 12 years are coming,” he says. “This is going to be a reunion-type thing for a lot of us.”

He’s sure to be dressed appropriately.