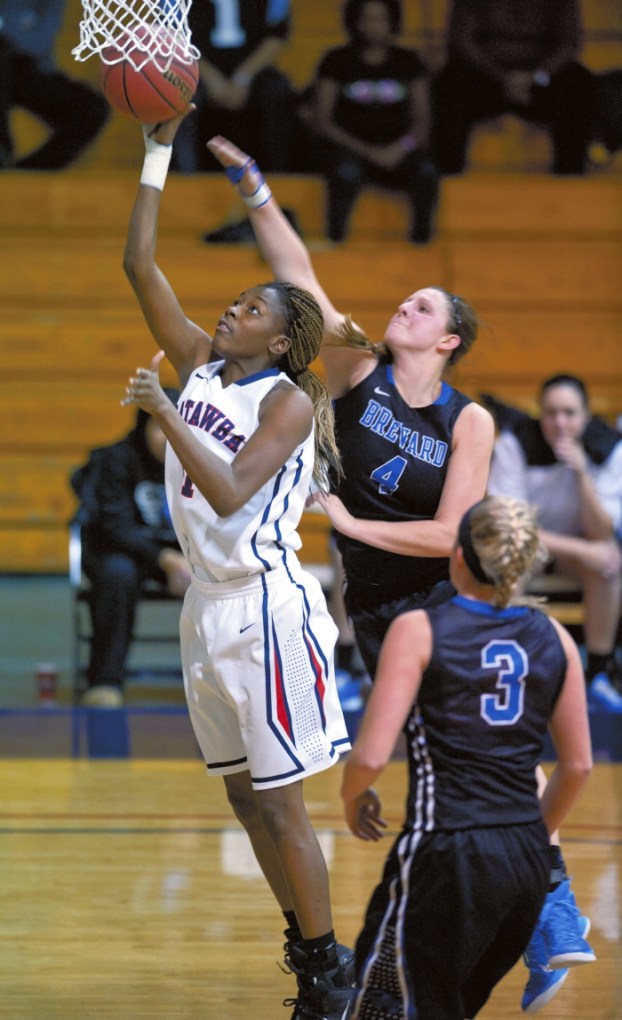 SALISBURY — Catawba’s women’s basketball team is middle-of-the-pack in the South Atlantic Conference, but there’s plenty of hope for a brighter future.

The Indians (7-6, 4-4) are tied for fifth in a 12-team league, but they had 5-foot-11 freshman Terri Rogers and 5-9 sophomore Jada Huntley in the lineup together for the first time in Saturday’s 80-61 breeze past Brevard at Goodman Gym.

“Jada just got eligible at the semester,” Catawba coach Angie Morton said. “Terri was out with an injury and then didn’t play in our last game (a close loss at Newberry) because of a violation of team rules. They’re really good players. We’re excited about having them both.”

Huntley’s impact since she became eligible has been enormous— 53 points and 43 rebounds in her last three outings.

Catawba allowed Huntley’s 21-point, 21-rebound effort at Newberry go to waste when it let a lead slip away in the final minutes, but the Indians got back in the win column against Brevard by shooting an impressive 55.4 percent. The Indians filled it up even with high-scoring guards Bri Johnson and Chloe Bully having quiet days. Zhaquondalee Greer helped the shooting percentage with a 4-for-5 effort off the bench.

Brevard, coached by former Pfeiffer star Shannon Reid, made seven 3-pointers and got 19 points from Katie Williams and 16 from Madison Lenox, but it couldn’t deal with the Indians in the paint.

Catawba led all the way and finished the first half strong for a 38-27 halftime lead.

“I wasn’t happy with our execution in the first half — we definitely didn’t play as well as we did at Anderson or Newberry,” Morton said. “But I thought we really started clicking in the second half.”

Catawba’s best basketball came early in the second half. The Indians crushed Brevard 22-3 in the first eight minutes after the break to take a 60-30 lead.

Brevard had a 13-0 run to make things respectable, but the Tornados never threatened in the second half.

Catawba is home again Wednesday for a visit by the Coker Cobras at 6 p.m.