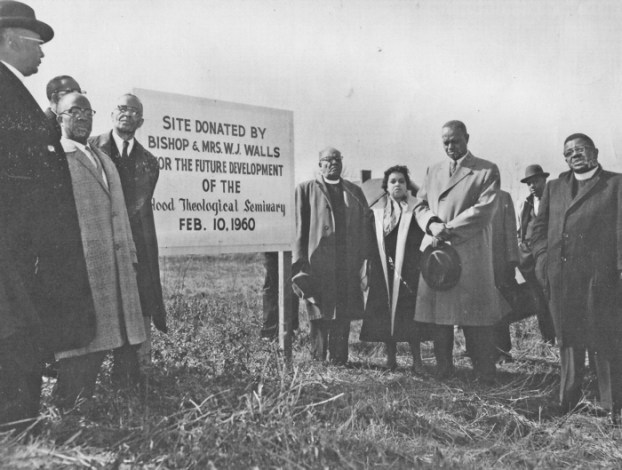 Reginald W. Brown provided this ‘Yesterday’ photograph and the information to go with it. Brown is involved in researching the history of Hood Theological Seminary in Salisbury, and this  photograph was taken in February 1960 at a gathering marking the site donation for the second Hood Theological Seminary building on the Livingstone College campus. Appearing in the picture, left to right, are Dr. S.P. Perry, Dean Frank R. Brown, Bishop Raymond L. Jones, Bishop William J. Walls, Dorothy J. Walls, President Samuel E. Duncan and the Rev. Mack Brandon standing behind the Rev. Alfred E. White, who was president of the Hood Theological Seminary alumni. During Founders Day 1960, Livingstone received a land gift valued at $20,000 from Bishop and Mrs. Walls. The land was given with two conditions. The first was to construct buildings that woudl extend the Hood Theological Seminary physical plant that had been dedicated in 1910 in honor of James Walker Hood. The second was to erect a facility for an Overseas Student Association and a place to house his denominational relics, library and collection of African-American literature. Brown said the land gift was part of a building boom producing in 1964 the W.J. Walls Center — one of  four new structures. Today, this refurbished building serves as the college’s student center and contains offices and facilities for recreation, a retail store, student affairs and a chapel. The construction of a second building satisfied the second condition. Bishop and Mrs. Walls gave a $75,000 gift in 1967 for creation of a heritage house and retreat for students from abroad. It was dedicated in February 1969 as the W.J. Walls Heritage Hall.. It would close after nearly 40 years of service and its contents are now stored off campus.