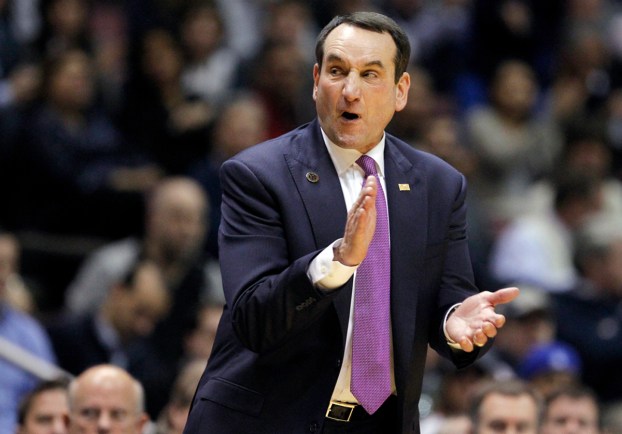 The Associated Press Duke head coach Mike Krzyzewski claps Dec. 18 against Connecticut in East Rutherford, N.J. The Duke coach will become the first men's coach in Division I with 1,000 wins on Sunday if his fifth-ranked Blue Devils beat St. John's.

College basketball: Coach K has sights on win No. 1K

DURHAM, N.C. (AP) — Mike Krzyzewski is on the verge of yet another coaching milestone.

The Duke coach will become the first men’s coach in Division I history with 1,000 wins on Sunday if his fifth-ranked Blue Devils beat St. John’s.

That milestone could come in the same arena where three seasons ago he became the winningest men’s coach in college basketball’s top tier.

A win at Madison Square Garden would bring his record to 1,000-308 during a career that spans four decades and includes four NCAA tournament titles and 11 Final Fours.

He says the wins that matter most are the ones that bring titles, not milestones, and he calls the forthcoming accomplishment “a heck of a thing … but it’s not a championship.”

“In order to win that many games, it’s taken 40 years — that’s a long time, and so you don’t win like that by being in the moment of a single-game accomplishment,” he said. “You do it in the accomplishment of what you’re trying to do for an entire season.”

For Krzyzewski, it’s the same approach he took three years ago when he drew closer to the record of 902 career wins — a mark held by his college coach and mentor, Bob Knight. He passed Knight in November 2011 by beating Michigan State in the Garden.

Now — after consecutive surprising losses put history on hold for a brief while — Coach K is in position to earn yet another memorable victory there.

He insists it will be just another win. His players know differently.

“When I was trying to decide what university I wanted to attend, being a part of Coach K’s legacy had a big part in me coming here,” said freshman big man Jahlil Okafor, a preseason All-American who was one of the nation’s top recruits. “So I’m excited for it.”

Krzyzewski’s colleagues say the forthcoming milestone is a testament to his longevity, with Miami coach Jim Larranaga joking that “it means we’re old” because “you can’t get 1,000 wins in two years.”

Without question, it took a long time and much patience. Krzyzewski spent five years at his alma mater, Army, where his first victory in 1975 was a 56-29 win over a Lehigh team coached by future NBA coach Brian Hill.

Krzyzewski has lasted 35 years — and counting — at Duke after a famously rocky start in which his first three teams were a combined 38-47.

Then came the 1982 recruiting class of Johnny Dawkins, Jay Bilas and Mark Alarie that helped propel the Blue Devils into seemingly permanent status among the nation’s elite.

Among the schools he’s beaten most often are Maryland (55 wins), Georgia Tech (53), Clemson (52) and North Carolina State (51) — though two weeks ago, the Wolfpack gave this Duke team one of the two losses that put Krzyzewski’s chase for 1,000 wins on hold for a week.

Syracuse’s Jim Boeheim, a close friend of Krzyzewski’s who is second to him on the Division I men’s wins list, jokes that Coach K will “coach forever.”

Reaching four figures is of secondary concern to Krzyzewski, who wants the focus on his freshman-dominated team and its chase for the program’s first Atlantic Coast Conference tournament title since 2011 and its first national title and Final Four since 2010.

He figures that finally getting past the distractions that come with pursuing and reaching 1,000 wins will put the attention back on the players.