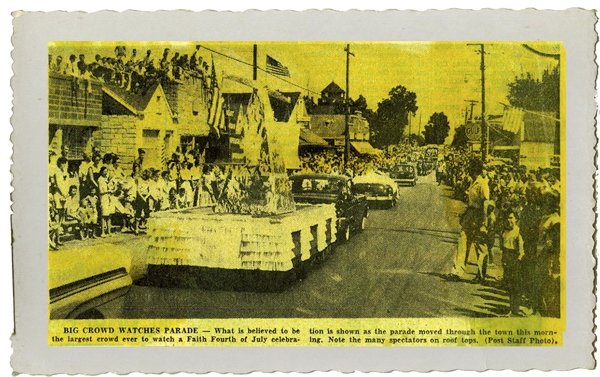 The small town of Faith is located in eastern Rowan County. Since 1946 the small town has hosted a Fourth of July celebration with patriotic pride.

The town of Faith was incorporated in 1903 and around that time a handful of area residents gathered to honor their Confederate War veterans with a picnic and games. The Peeler family, operators of a number of businesses in Faith, featured prominently in these initial get-togethers on the Fourth of July. The celebrations were more like family picnics with a few activities. One citizen remembers the greasy pole that proved a challenge for one soldier in the crowd. Also, races were a favorite and a horse drawn merry-go-round was one of the more unusual attractions.

The Faith Fourth of July celebration was originally sanctioned by the town government in 1920, but sadly, wars and general economic distress intervened. Gatherings were sporadic. The end of World War II brought back happier times and the annual celebration was revived. That first year back, organizers received quite a shock when twice as many participants showed up as were expected. Food quickly ran out and Faith’s cooks went to their own kitchens to bring more food.

One of the highlights in the history of the Faith Fourth was 1992, the year President George Bush attended the celebration. Having the President of the United States drop by for a ballgame (he actually played), lunch and a speech was an all-time high for the residents and guests that year.

The Fourth of July offers an old-fashioned good time with events like the sack race, three-legged race, a watermelon eating contest and an egg toss. All activities take place on the Faith American Legion Park and Faith Elementary School grounds.

The carnival rides are particular favorites of the children, and families can enjoy dollar night and armband night. Food and concessions vendors add to the festivities, and a relatively new event, the Faith Idol Competition, serves as great entertainment as well as a career-launching opportunity for Salisbury-Rowan’s abundant local talent.

The four sponsoring civic organizations use the proceeds from the Fourth of July Celebration for scholarships, local school needs, local library needs, park improvements and other town/community necessities.

The Fourth of July Celebration Committee invites new-comers to check out their celebration. The town of Faith really shows their true colors of red, white and blue each July Fourth.