Price High alumni meet at their ‘one common denominator’ 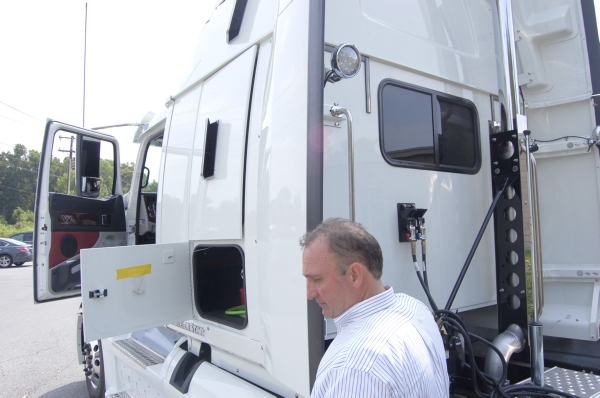 John Helms, plant operations manager at the Composite Panels Technologies plant on Jake Alexander Boulevard, stands by a Western Star 5700. The plant makes the shell of the sleeper cab for the truck, which is assembled at Cleveland's Freightliner plant.

Composite panels are essentially a lightweight substructure, such as an outer skin, inner skin or liner. A typical panel has a polypropylene core with an aluminum skin around it. But other materials, such as wood or rubber can be used too.

A cross section of a panel is like looking at a cross section of an Oreo cookie: An outer layer, called “facing material” on the top and bottom with an inner core. A panel’s core can have a honeycomb structure.

The panels are bonded together with glue in a vacuum press.

The plant will fill custom orders. The first order is making the shells for the sleeper cab for the Western Star 5700 series trucks that will be assembled at Freightliner’s plant in Cleveland. Freightliner has to fill an order for 1,800 of the 5700 series in the coming year.

The panels are used because they are lightweight, strong and durable. For example, the sleeper-cab shells the factory will make weigh 375 pounds, hundreds of pounds less than a typical cab, according to John Helms, the plant’s operations manager.

Helms, who has been in Salisbury for 11 years, was hired to run the plant. He has a background in plant management but has also been in finance and real estate.

He said the plant wants to double its workforce to 40 employees by the end of July. By the end of the year, the plant could have up to 60 workers, he said. A second shift could be added too.

Helms said the plant is hiring locally and needs assembly workers and maintenance workers. Prospective employees should have experience building things with their hands, he said. Someone who is a handyman, or woman, would be a good fit for the factory, he said.

The company wants to support the community, Helms said.

Bryant Cassell said he used to work at the plant back when it was Lyon-Shaw. Now, he works on the factory floor for CPT. He got the job through Labor Finders and said it’s good work.

The plant opened in 1969 as Lyon-Shaw, a manufacturer of wrought-iron furniture. It was sold in 1986 to Winston Furniture Co. of Birmingham, Alabama, and in 1997 to Woodard. Woodard ceased operations in 2003. Other than occasional warehouse use, the building has been vacant for several years.

The building is owned by Hedrick Industries of Salisbury. Joanne Johnson, with Hedrick, said she is “so joyful,” that CPT is using the building — it’s a perfect fit, she said.

Helms said CPT has a long-term commitment on the building and plans to be a permanent fixture in Salisbury. He added that they used local vendors to upfit the building.

The Eastern Company has been making composite panels for 12 years and has facilities in Canada and Mexico too. Helms said the company was looking for a location across North and South Carolina and settled on the Salisbury site because the building matched what they were looking for.

People interested in applying with CPT can stop by the office at the facility, at 1538 Jake Alexander Boulevard W., between 8 a.m. and 10 a.m. on weekdays.