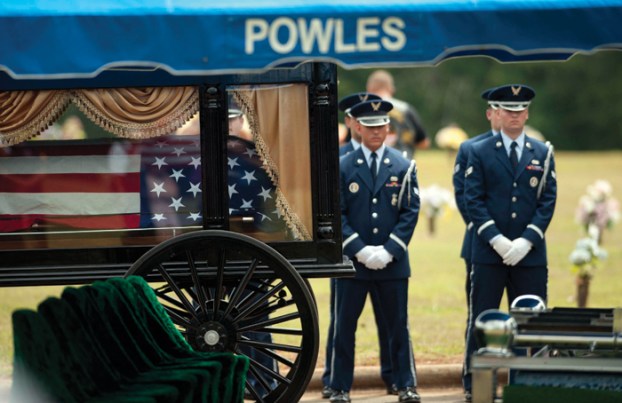 Morgan funeral: A voice from ‘so long ago, so far away’

Editor’s note: Nearly 50 years after his plane went down over Laos, Edwin Morgan Sr. was laid to rest Saturday. Here is Morgan’s story as he might have told it himself, written by Post columnist Mark Wineka.

ROCKWELL — My name is Chief Master Sgt. Edwin E. Morgan Sr., and it’s been a long time since we’ve talked — 49 years, three months and 14 days, to be exact.

Somehow, the effort to bring at least part of me home and celebrate my return has given me a voice again — a voice to say thank you. Thank you for not giving up on me and allowing me this chance to be in your consciousness one more time.

Had I made it out of Vietnam alive, I would be 87 now, and that’s hard for me to imagine. But I like this resting place, this corner of Brookhill Memorial Gardens. I see plenty of trees and hear birds singing all the time. The expanse of sky overhead will afford me magnificent starlit nights to share with my beloved Beth, placed here 32 years ago.

She hears me now, too.

It’s like the Rev. Tom Teichroew said Saturday morning at First Baptist Church. My coming home reopens a door that was shut “so long ago and so far away.”

Not many men have two funerals, not to mention services 37 years apart. I understand there was a service for me at this same spot in January 1978, when the Air Force changed my status from missing to presumed dead. Beth was here for that graveside ceremony, and so were my kids, Frances and Eddie Jr. They were younger then, of course.

I can’t tell you how much I appreciate the Air Force Honor Guard’s 21-gun salute Saturday, the playing of “Taps,” the mournful bagpipe and the solemn presentation of folded U.S. flags to my children.

A white-gloved lady named Sara McCubbins steered Daisy, a black war horse, from the funeral home to the church to the cemetery. Daisy pulled the hearse my flag-draped wooden casket was carried in.

I loved hearing the clip-clop of Daisy’s hooves as we rolled along.

Men and women from the Patriot Guard walked in front of us carrying American flags that were taller than they were.

Walking behind them were some of my brothers from Vietnam, guys who were part of the “Spooky” fraternity that flew our AC-47D gunships, the aircraft I died in. They came from all over — Danny Reese from Nebraska; Mike Acosta from Illinois; Bruce Wright from Massachusetts; Bernie Ducat from Connecticut; and Ronnie Brooks, Junior Skinner and James Cameron, all from Georgia.

These guys served after my time in Vietnam, but I feel like I know them.

Death is a strange thing. There was that instant when all seven of us on that “Spooky 73” crew realized we had bought it. I remember thinking I was only 38, and there so much I still wanted to do with Frances, who was only 6. I didn’t even know Beth already was two months pregnant with Eddie Jr.

But I say death is strange because the Air Force still doesn’t know exactly why our plane went down. Reese said Saturday it was a good bet our heavily armed gunship was hit March 13, 1966, by a rocket or mortar fired from the ground. If it hit near the fuel tank or back at the tail where all the flares were stored, we would have gone pretty quickly.

“It would totally melt the airplane down,” Reese said.

I guess how it all happened doesn’t matter now. But I was proud to be a loadmaster on Spooky 73, which flew out of the Da Nang Air Base in Vietnam. It was my job to load the plane with ammunition and flares and make sure their weight was evenly distributed on board.

While in flight, I would run ammo cans to the gunners, Marshall Pauley and Dean Duvall. I also would help flight engineer Gene Davis. When the time came for shooting, I pulled out the flares, set their timers and threw them out.

We always flew at night and always low to the ground — say 2,000 to 3,000 feet. The Viet Cong feared our gunships. The engines’ roaring sounds and the red tracer lines from the three mini-guns on the side gave them the terrorizing look of dragons.

But our guys on the ground loved us. Reese said when he wears his “Spooky” ball cap into a room with a lot of other Vietnam veterans, he always has Green Berets, Army rangers and others walking up to him to say thanks.

“We were the ones who saved their lives,” Reese said.

That will always give me satisfaction.

It’s funny that I died in Laos, a country I had never set foot in and a nation 11 time zones away from my home in North Carolina. The crash site was in the mountains, about 32 kilometers from a village called Laman, which I can’t even pronounce. No one found us for years. Palms and hardwood trees grew up around us, while thick brush and vines covered our scar on the earth like a blanket.

But a search team in 1997 found something. I think a piece of our landing gear hadn’t yet succumbed to the acidic soil. Excavation teams came digging around in years to come until small bits of me were first unearthed in 2010. Between then and 2014, teams also found other evidence of military equipment and aircraft wreckage.

I smile, thinking that some minor bridgework I had done on my teeth would end up being the key for verifying who I was. When Frances and Eddie came to the Central Identification Laboratory at the Joint Base Pearl Harbor-Hickam just last week, the evidence of me laid before them could pretty much have fit in their hands.

But it was enough, and they already had received my dog tags also recovered from the site.

I know how difficult it must have been to put together Saturday’s funeral service 50 years after the fact. I left behind two children, four grandchildren and three great-grandchildren who really know very little about me. All they really had to go on was my military career. I tried them all — Navy, Army and Air Force.

Just know, I was proud to serve, and I value all the medals and awards.

One of the people who spoke at Saturday’s funeral was Chris Crowell, who wasn’t even born yet when my plane was lost. But as a kid, he grew up across the street from my parents, and Chris naturally heard talk of how Maw and Paw Morgan had lost a son in Vietnam.

He said he probably recognized the meaning behind a POW/MIA plate on his parents’ old Dodge farm truck before he could actually read. Before I left for Vietnam, I remember walking over to Chris’ mom, Lexie, and asking her to look after my folks while I was gone.

Chris said my parents never gave up hope. “They just knew it was a mistake, and he would come walking through the door any day,” he said.

Years later, when Chris first met his wife, she was wearing a MIA bracelet out of respect for her brother’s best friend. That bracelet had my name on it, and that best friend was Eddie Jr.

“The world got a little smaller with another life influenced by Sgt. Morgan’s sacrifice,” Chris said. That same bracelet now belongs to my grandson Sam, Eddie’s boy, who was one of my pallbearers Saturday along with my great-grandson Christian.

The Rev. Teichroew noted when he first talked to Frances and Eddie about me, how little they had to draw on.

The pastor eventually decided if he looked at the fruit — my children — he  also might see the tree. I’m glad he finds in Frances and Eddie compassion, patience, integrity, resolve and a sense of humor.

I’m humbled he assumes I must have had similar traits.

But how did my voice return? Some kind of energy started building when the military would not stop looking for me. Then it kept growing when bits of me were found and identified, and my family traveled over land and ocean to reclaim me.

It got bigger when I saw all the people with flags, signs and salutes standing along streets and waving from overpasses. I think I finally had to speak when I saw my children holding those folded flags Saturday, and I watched as my Spooky brothers walked one by one toward the mirror lid on my burial vault to lay down flowers and flags.

Yes, I like this spot. Thank you, for everything.