Morgan funeral: A voice from ‘so long ago, so… 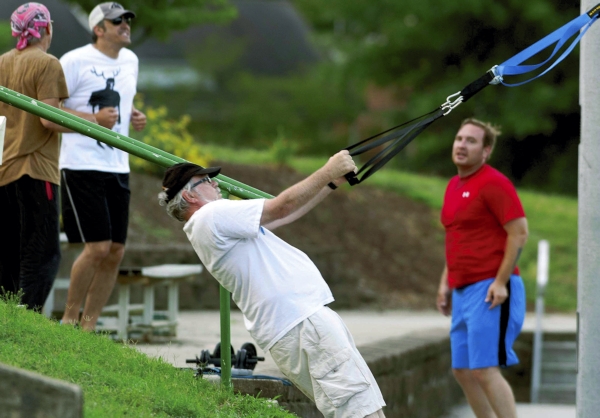 JON C. LAKEY / SALISBURY POST Bob Paolino (front) works out with in the circuit training boot camp at City park. Lee Street Theatre has brought in a personal fitness trainer to lead a boot camp style fitness regiment. Cast members and crew of the upcoming production of "A Few Good Men" are hoping to get into the spirit of the military characters and as well as utilize the team building aspect while working out together. The boot camp takes place three days a week for one hour at Salisbury's City Park in the early morning hours. Monday, June 22, 2015, in Salisbury, N.C.

It’s about 6:15. The morning has dawned clear and the tiniest bit cool.

“You awake yet?” someone asks.

A fairly motley crew, if you will, has gathered in front of the veterans’ memorial at City Park. They don’t look like Marines, but they play them in an upcoming Lee Street production of “A Few Good Men.”

When cast members signed on for the play, they also signed on for a six-week boot camp. The cast and crew meet three mornings a week for circuit training, led by Robbie Farlow. Farlow, the Catawba College roommate of Justin Dionne, Lee Street’s managing artistic director, is a certified trainer and fitness coach. He’s tasked with getting this group in shape, and building camaraderie in the process.

“I wanna vomit,” says Lara Williams, stage manager, as she carries two 45-pound weight plates not much smaller than she is. “This is awful. I’m not even in the show.”

But she says it with a grin. Remember, this is a dramatic bunch.

“Circuit training keeps your heart rate up, because you’re always moving,” Farlow says. “With everything moving, you can get a lot done in a shorter amount of time. You’re burning fat and building muscle. It’s a great way to train.”

After warm-ups, the group breaks into small groups and runs two laps around the walking track, then heads to four different stations. Farlow has set up a variety of weight-bearing and resistance exercises, and the goal is to keep moving.

“I love it!” he says, attacking each station with enthusiasm.

“I hate running,” says Bob Paolino, walking at a brisk pace — well, maybe not that brisk — between stations.

Still, he couldn’t turn down the opportunity to play Col. Nathan Jessup, the role made popular by Jack Nicholson, who utters the unforgettable line, “You can’t handle the truth!”

“I really wanted to do this role,” Paolino says, and boot camp was mandatory. “Once you signed up, you signed up.”

He says he’s lost about 10 pounds.

Paolino says he wanted the role “because it’s meaty. You can get your teeth into it. Characters like his always seem one-dimensional. They’re just bastards. But you find there’s more to him. He’s a colonel, he’s educated and he’s well read, but he’s taken the Marine code to a dangerous level.”

Paolino has avoided watching the movie, but has watched a PBS special about the Marines. And he’s more or less tolerating those early morning workouts.

Dionne is lifting weights on the days he doesn’t work out with the group. He’s playing Lt. Daniel Kaffee, the role Tom Cruise played in the movie.

The idea for the boot camp was hatched when Dionne and director Craig Kolkebeck were preparing for the show.

“I was concerned some of us weren’t in decent enough shape,” Dionne says. “Robbie does the fitness thing, and I said, ‘Hey man, you wanna come down for the summer?’ He’s giving us a break on cost, and it’ll look good on his resume. He’s also helping us with nutrition and diet plans, too. It’s been good for team building.”

At station two, group members use dumbbells to do rows and deadlifts, as well as step-ups on the concrete steps overlooking the tennis courts.

Farlow is there to help with form and gives out lots of compliments. Group members survey a pile of vomit — presumably from the night before — and decide it doesn’t belong to anyone in the group.

Team members try to get through each circuit two times. It makes the 30 minutes fly by. Dionne has sweat dripping off his nose by the time he finishes the last station.

They gather back at the flag poles for a cool down, and they’re done by 7:15.

Interns Larissa Garcia and Katelyn Long, along with Alex Thompson, who plays Private Loudon Downey, are all on board.

“I told them, if you wanna get a free trainer for the summer, you can,” Dionne says.

Farlow says he broke out his theater degree in giving the cast and crew a Patton-style inspirational speech at the start of training.

“This is very much an ensemble show,” he says. “We work as a team. So to apply boot camp to this situation would help, and it has.”

Farlow has encouraged the cast and crew to track their food and exercise through My Fitness Pal. He’s encouraged them to eat more protein, along with vegetables and fruit, then filling in with fats and carbs. He’s even offered to go to the grocery store with them to help them choose better foods.

“You treat the grocery store like a NASCAR track,” he says. “Stay around the outside.”

For all her grumbling, Williams has enjoyed the group training. “It’s the best thing for ensemble building, obviously. We’re starting to really click. It’s awesome. I’ve always worked out. Everyone says they feel like they’ve toned up. I think everyone’s doing really well.”

Anthony Cataldo, an acting major at UNCG, plays Lance Corporal Harold Dawson. He says he just didn’t want to come home and work all summer, so he took on this role. He was a Lee Street intern his senior year at Carson High School.

“He’s working us hard,” Cataldo says, “but it’s all a good time with good people. It’s not as gruesome as I thought it would be.”

Jon Planovsky, who plays Lt. Jonathan Kendrick, has actually gained three pounds of muscle. “You use muscles that you don’t use every day,” says Planovsky, a local landscaper and co-owner of Critters. “It’s kinda satisfying to know we can keep up with the younger cast members.”