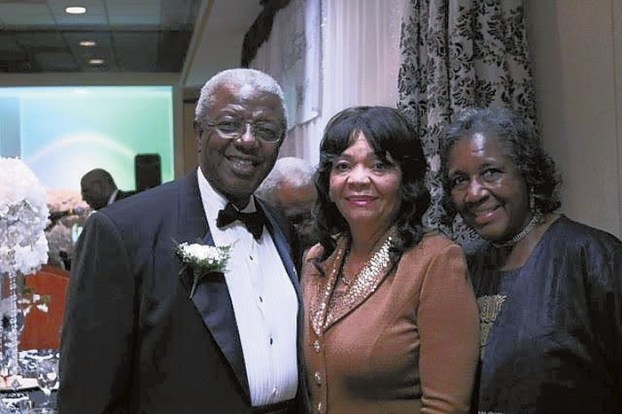 Livingstone President Dr. Jimmy R. Jenkins Sr., his wife Dr. Faleese Moore Jenkins and Dr. Yvonne A. Tracey, chairwoman of the Walls Advisory Board finance committee and interim president of Barber-Scotia College, at Friday’s banquet to raise money for the renovation of Heritage Hall on the Livingstone campus. Photo by Gibron Saxon

Jenkins spoke at a fund-raising banquet for Heritage Hall, which is located on Livingstone’s campus and houses documents and memorabilia from the college, the African Methodist Episcopal Zion Church and Hood Theological Seminary. Plans are to transform Heritage Hall into a grand facility for genealogical and academic research to be used by people throughout the country.

Sponsored by The Walls Advisory Board, a consortium of the A.M.E. Zion Church, Livingstone and Hood, the banquet was held at Livingstone’s School of Hospitality Management & Culinary Arts on Jake Alexander Boulevard.

Jenkins invoked several names during his speech, including Bishop James Varick, after whom Livingstone’s auditorium is named, Harriet Tubman, who led slaves to freedom through The Underground Railroad, and Bishop George E. Battle, Jr., Senior Bishop in the A.M.E. Zion Church and Chairman of Livingstone’s Board of Trustees.

“It’s important to make sure our children know these people,” Jenkins said. “A little knowledge is power, and the more knowledge you have, the more power you have.”

The semi-formal banquet was emceed by Dr. State W. Alexander, III, executive assistant to the president and vice president of communications & public relations at Livingstone, and Dr. Yvonne A. Tracey, interim president of Barber-Scotia College and chairwoman of the Walls Advisory Board finance committee. Music was provided by The Livingstone College Presidential Ensemble, which is comprised of bass guitarist Justin Walker, drummer Lamont Bird and pianist Quentin Bethea, who covered songs by Stevie Wonder, Bill Withers and others.

Bethea, a baritone, performed a medley of “How Great Thou Art” and “Total Praise”. And Teresa Moore-Mitchell, a soprano and Livingstone professor of voice, amazed the crowd with “The Lord’s Prayer” and another selection.

Besides raising money for Heritage Hall, the banquet’s purpose was to honor people who have been instrumental in preserving historical documents and artifacts of the A.M.E. Zion Church, Livingstone College and Hood Theological Seminary.

Presenting the honorees was the Reverend Dr. Barbara LaToison, a Walls Advisory Board member. Honored posthumously were Dr. Phyllis H. Galloway, the Reverend Willie Lee Banks Aldrich and Bishop William Jacob Walls and his wife Dorothy. Galloway became director of Heritage Hall in 1997, a post she held until retiring in 2006. Aldrich, a Livingstone graduate, retired as head librarian of Hood and as director of Heritage Hall. And Walls, a graduate of Livingstone and Hood, was consecrated as a bishop in the A.M.E. Zion Church in 1924. The Walls Center at Livingstone, which houses the chapel and the student union, is named after him.

Evans, a retired educator who’s actively involved in the Salisbury community and has coordinated a Black History display at The Rowan Museum for several years, is a granddaughter of Dr. James E.K. Aggrey, after whom Livingstone’s cafeteria is named. She’s also a five-time Teacher of the Year in Rowan-Salisbury Schools.

Battle, a staunch supporter of The Walls Advisory Board, served on the Charlotte-Mecklenburg School Board for 17 years, including four as chairman. He’s founder of the Greater Enrichment Program, an afterschool initiative that has received a national award for the best program of its kind utilizing federal funds, and one of the founders of the Urban League of Central Carolinas. Battle is a member of the NAACP, Alpha Phi Alpha Fraternity, Inc., Christian Ministers Fellowship Association and the National Council of Churches. He has been married to Iris Miller Battle for 45 years, and they have two children and four grandchildren.

Battle was on the program to bring remarks but was unable to attend Friday’s event. Bishop W. Darin Moore, also a member of Livingstone College’s Board of Trustees, spoke in his stead after being introduced by Dr. William McKenith, chairman of the Walls Advisory Board.

“This has been a momentous evening, but more importantly, you will become a part of the history when Heritage Hall is transformed,” Moore said. “This is such an important investment, and that’s why it was critical for me to try to be here tonight.

“When we fail to recognize our history, we really can’t address the problems that we face both today and tomorrow,” Moore continued, before commending Jenkins on his speech and “for being a profound thinker in addressing the critical issues that we’re facing.”

The evening concluded with remarks from retired A.M.E. Zion Bishop Joseph Johnson, who congratulated the honorees and said it’s imperative that Heritage Hall is transformed to ensure students have a place where they can conduct research.