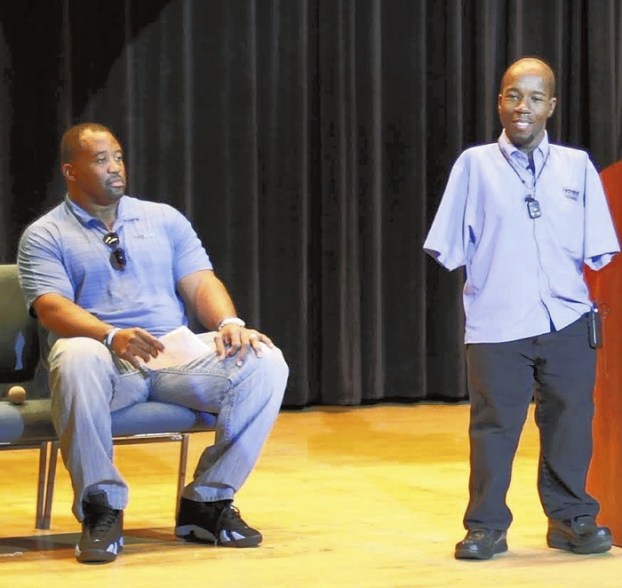 SALISBURY – Renaldo Wynn played collegiate football at Notre Dame before becoming a first-round draft pick. On Monday, he admitted to Livingstone students that he made some very poor decisions in college.

The Game Plan for Life program originated with former Washington Redskins Coach turned NASCAR team owner Joe Gibbs and utilizes the theme “Decisions = Destiny” in schools. For about three years now, Gibbs’ program has worked with one created in 2003 by Terry Osborne, general manager/CEO of the Rowan/Kannapolis ABC Board, which carries the slogan, “Preparation for the game of life does not require the practice of underage drinking.”

Through both programs, adults visit different schools to share their personal triumphs and struggles while stressing to students the importance of the choices they make.

At Livingstone, Wynn said that because of his bad choices he was on the verge of getting kicked out of Notre Dame, losing his scholarship and returning home to Chicago’s south side. But after deciding his life needed some drastic changes, Wynn said he asked God to help him, he got married and he started attending classes and studying.

“We all make mistakes in life,” Wynn said. “We all make some bad decisions. I spent 13 years in the NFL, but my backup plan was education. I didn’t get to the NFL on my own. I needed help. And along with that, I had to make some decisions.”

“I went in the Marine Corps, and after that I got into law enforcement,” Collins said. “But after a while I realized if I really wanted to rise in the ranks, I had to get some education. The smallest decisions sometime can impact your life years down the road.”

He told Livingstone students on Monday that they’re fortunate.

“When I was your age I didn’t have this opportunity,” Collins said. “I didn’t have people in my ear telling me about decisions.”

Before Parker spoke, the audience was shown a segment of an ESPN documentary about him.

Parker, a vehicle engineer for Hendricks Motorsports, which includes drivers Jimmie Johnson, Jeff Gordon, Dale Earnhardt, Jr. and Kasey Kahne, has an engineering degree from Clemson University and is working on his MBA.

He was born without arms.

“At every step of the way in my life there have been people who said I couldn’t do things like ride a bike …” Parker said. “Thank goodness my dad always had enough of a vision for me to never tell me no.”

After graduating from Clemson, Parker interned at Hendricks Motorsports. What was supposed to be a 10-week venture before he applied to law school has turned into a management job that’s lasted for nearly a decade.

“Understanding that we all have challenges is key,” Parker said. “One of my favorite quotes is by Maya Angelou and says ‘you may not control all the events that happen to you, but you can decide not to be reduced by them.’ Another one of my favorite quotes by her is ‘if you don’t like something, change it. If you can’t change it, change your attitude.’ ”

Parker said people should take advantage of their opportunities. “Destiny is reaching your full potential in life, but you have to figure out what that metric of success is for you,” he said. “To me, to be able to come here today and possibly help one person is success.”

Parker was followed by McFadden, a Johnson C. Smith University graduate who joked about being jealous over Livingstone’s consecutive CIAA basketball titles but grew serious when discussing the senseless loss of life he’s investigated in more than 30 years on the force.

He referenced the Black Lives Matter Movement that’s sweeping the country but said African-Americans should be just as upset about black-on-black crime.

“We have a lot of issues,” said McFadden. “To say we have all the answers, we don’t. But we should be willing to work together.”

Auten said several Livingstone students made good decisions Monday by networking with him and the speakers after the event.

“This has been rewarding,” Auten said. “Y’all have great visions on programs in which you can involve your student body, and that’s what this was all about. I think this program is having an impact locally on drug and alcohol usage, and y’all did a fabulous job of putting the message out.”