Postal service gives in; Granite Quarry residents can use… 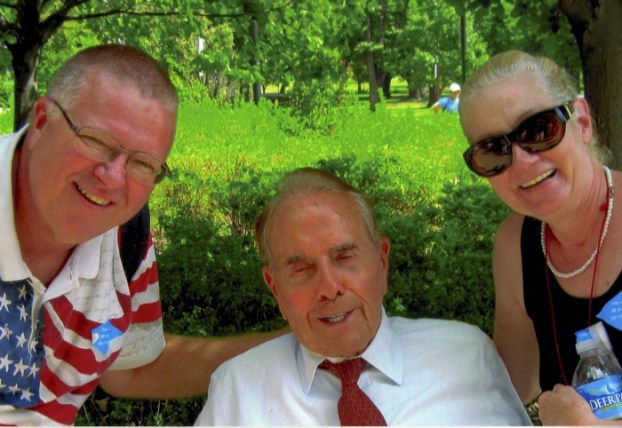 SALISBURY — Glenda and Steve Ball were preparing to get a good look at the World War II Memorial in Washington, D.C., Sept. 5 when Glenda says she had a Scarlett O’Hara moment.

Close by, waiting to meet one of the many World War II veterans’ Honor Flights which have visited the memorial in recent years was Sen. Bob Dole.

Anyone from Rowan County feels a close connection to Dole, because he is, of course, the husband of Salisbury native Elizabeth Dole, also a former U.S. senator. The fact that Bob Dole is a World War II hero himself, the former Senate Majority Leader, the 1976 Republican nominee for vice president and the 1996 GOP nominee for president is secondary.

So Glenda Ball did what any Southern woman with good manners would do. She introduced herself, let Dole know their Salisbury connection, and the Balls had a great conversation with Dole at the memorial site.

One cannot talk about Dole without mentioning his role as the fundraising chairman for the memorial, nor the physical price he paid as a soldier during World War II.

Located on the national mall, the World War II Memorial honors the 16 million men and women who served in the armed forces during World War II, the more than 400,000 who died, and the millions who supported the war effort from home.

As a combat infantry officer in 1945, Dole was serving in northern Italy when he was ordered to lead an assault against a German machine gun nest.

While trying to save an Army radioman, Dole was severely injured by German fire. His injuries included a shattered right shoulder, fractured vertebrae in his neck and spine, a damaged kidney and bits of shrapnel throughout his body.

For a time, he was paralyzed from the neck down, and medics who first examined Dole thought he would not survive.

Dole’s recovery back in the States took about three years. He was left with a paralyzed right arm and hand. In the war, Dole earned two Purple Hearts and a Bronze Star.

This fall, Bob and Elizabeth Dole returned to the region of northern Italy where Dole was injured. The emotional trip no doubt was similar to the one Glenda Ball and other members of her family made to Holland in 2005 on the 60th anniversary of the country’s liberation in World War II.

Why Holland?  Glenda’s father, John Albert Hayden Lingle, was a waist gunner on the Jolly Duck, a B-24 that made a crash landing into the countryside near Zoeterwoude on Feb. 22, 1945. The entire 10-man crew survived the belly-flop landing, and the men took off in pairs in hopes that some of them would be able to avoid the Germans looking for them.

Hayden Lingle and a fellow crew member were the most seriously hurt, so they were paired together. It wasn’t long before two  heavily armed German soldiers on motorcycles captured Lingle and three others as they were wading waist-deep across a canal.

They were marched with other prisoners to Frankfurt, then Nurnberg, then to a prisoner-of-war camp in Mooseberg.

Lingle, a Rowan County farm boy, ended up losing 67 pounds in 67 days before the German surrender and his liberation on April 29, 1945.

It’s probably more than coincidence that April 29 is the same date the World War II Memorial in Washington was opened.

By invitation, Glenda Ball and four other family members made that trip to Holland in 2005 to take part in a memorial ceremony near the site where her father’s B-24 went down. A plaque dedicated that day honored innocent Dutch victims of the war, the men in the 392nd Bomb Group who were killed in action or captured and those who evaded capture with the help of courageous Dutch patriots who risked everything in the name of freedom.

A weeping willow was also planted near the memorial plaque.

“He would have been so surprised that five of his family members traveled to Holland,” Glenda says.

She laughs, saying the people in The Netherlands “had never heard anyone speak English the way I spoke it.”

Glenda says her father spoke infrequently of his war experiences, which were gruesome. She knows he had nightmares about his bombing missions and the time he spent as a POW the rest of his life.

Plus, his best friend from their 32 bombing missions, John McCormick, was shot and killed in Holland before the liberation.

“There was survivor guilt,” Glenda says. “Survivors serve their country twice — in the actual battle and in the years that follow.”

About 30 years ago, Glenda wrote a poem in tribute to her father and tried to include this feeling about survival during and after wars. Seeing Bob Dole at the World War II Memorial in September prompted her to bring that poem to the Post recently.

Here it is, a good poem for Veterans Day:

In Reckoning of Sacrifice

In reckoning of sacrifice
We shouldn’t only count lost life
And honor those who died.
Survivors also paid a price.

Survivors lived to see again
The homes and fields of simpler times.
But scenes they saw and wounds they bore
Live on with them, and cause them pain.

They do not talk, they will not tell
Of things they prayed they could forget.
And so, we may forget them … these
Brave men who served their country well.

Survivors serve their country twice:
In war years, and forever on.
Count guilt and nightmares, broken health
In reckoning of sacrifice.