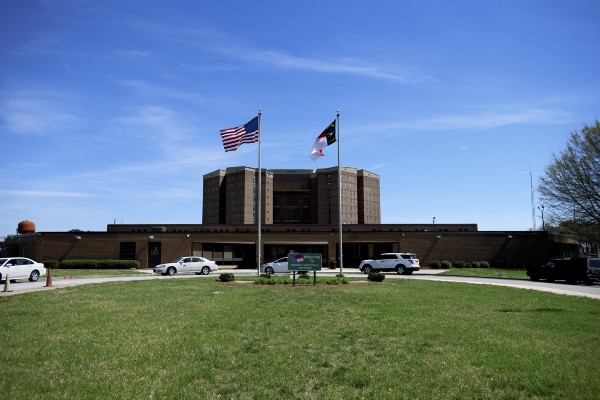 Piedmont Correctional Institution: A look behind the High Rise walls

David Wichy was convicted in 2005, a little more than a year after he opened fire on a group of cars filled with high school students. No motive was ever given, but the incident began after a feud between two boys, neither of which was Wichy or the 17-year-old Mecklenburg teen who was shot.

The teen survived after six weeks in the hospital, four of those in a coma and Wichy pleaded guilty in order to keep the family from enduring a trial.

Wichy has served 13 years of his 17-year prison sentence and is currently being held at Piedmont Correctional Institution, known colloquially as the High Rise, nicknamed for its high-rise apartment look. The now 39-year-old was being held in Bertie Correctional Institution, in Windsor, until he asked to be transferred to Rowan County, mainly for its enterprise and educational programs.

“I relocated for the educational opportunities,” Wichy said simply.

While at the facility, he’s also participated in other vocational programs, including auto body.

The prison, located on Camp Road, just off U.S. 29, was built around May 1978 and inmates entered the facility in May 1980. It is a medium-custody facility that operates with 250 corrections officers, and countless other staff, administrators and community volunteers.

What used to be called Rowan Correctional Center still operates as the minimum security unit of Piedmont. Together the medium and minimum custody facilities house 978 inmates.

“This restructuring happened a few years ago and allowed us to eliminate several management positions at the smaller prison for cost reduction. It now operates as a unit of the larger nearby facility,” said Keith Acree, communications director with the N.C. Department of Public Safety.

The “low rise,” located on U.S. 29, is led by a unit manager and receives its support services from the larger facility.

Acree said several of the systems’ smaller minimum security facilities have been absorbed into larger nearby prisons in a similar manner.

The 11-story prison sits on 52 acres, including a six-story residential tower that houses inmates. Each floor has two levels and is divided into two wings. Each wing has three cell blocks, which holds 16 inmates, for a total of 48 inmates and a total of 96 on the floor.

There is a housing unit named the 208 Dormitory because it was built to hold 208 inmates. Those inmates are ones who are new admissions and some who have chronic diseases.

The prison has a 14-bed infirmary and a medical facility with some of the same capabilities as an outpatient facility outside of prison walls including X-ray and EKG machines, and a lab. The prison also has an onsite dental clinic, explained Todd Pinion, region director of the Mountain Region.

Pinion served as superintendent of the prison prior to his appointment to regional director.

“The prison is like the inner workings of a clock, everything works together like it’s supposed to work,” Pinion said.

He said it takes a lot of people in specialized fields, from food services to medical, to make the prison work.

“Whatever you may need on the outside, we’ve provided here,” Pinion said.

He said the No. 1 priority is to protect the general public and second to keep the inmates safe as well as get them ready for transitioning outside of prison through onsite programs.

There are a number of treatment programs including substance abuse, anger management, Alcoholic/Narcotics Anonymous, as well as enterprise programs that allows an inmate to learn a skill such as re-upholstery or vocational programs such as auto body and woodworking. Literacy and adult education classes are also offered to prepare the inmate for their GED.

Wichy said trying to get his education and participate in various prison programs is his way of “balancing out the scales.”

“When I get out, I’ll have more opportunities,” Wichy said.

He admits his incarceration was a result of immaturity. “I was at a point in my life when I wasn’t developed as a man,” he said.

He said the shooting was a “misunderstanding. I reacted to a misinterpretation of the facts.”

Wichy initially wanted to transfer to Piedmont Correctional Institute to enroll in the auto body program because he was looking for some type of opportunity. He also heard about the chance to get his education through Guilford College’s education pilot program.

The college created a program — the Higher Education in Prison Initiative — where they partnered with the prison and provided professors to teach credit-bearing liberal arts courses. The program was established to address the issue and hopefully break the cycle of recidivism. The college learned the rate of recidivism drops for those who earn degrees in prison.

Wichy has also added a correspondence course through UNC-Chapel Hill where he hopes to obtain his bachelor’s degree.

“When I came here, I came for one class. I wasn’t even thinking about a college degree,” Wichy said.

He’s also participated in the anger management courses offered and the chaplains’ service program — One Day with God.

“When there aren’t programs, you are limited to what you can accomplish when you get out. Now I have a new vision,” he said.

Like Wichy, some inmates request participation in certain programs like construction or auto body. The construction program works with Rowan-Cabarrus Community College instructors who teach inmates the basics of blueprint reading, cabinetry and how to build a home. Since the site does not lend itself to large construction projects, inmates learn the trade through scaled down models.

The two-year program offers apprenticeships offered through the N.C. Department of Labor.

“This is a good trade for them. It’s something they can use on the streets,” said Joe Valliere, assistant superintendent of custody and operations.

The re-upholstery program is the only one of its kind in the N.C. correctional system and has roughly 40 participating inmates. There are 32 separate revenue-producing operations in the state; these enterprise operations use 3,200 inmates for various contracts. The men have re-upholstered many government office chairs, school bus seats, and some college office chairs throughout the state.

Inmate clothing and laundry costs over half a million at $689,573 and $190,946 covers vehicle operating costs, with $48,567 budgeted for inmate education. According to the provided numbers $43,759 pays for equipment. The budget is rounded out with $23,367 for other miscellaneous items.

In 2010, the most available statistics, show the cost to taxpayers for the N.C. Department of Corrections was $1.2 million at a time when there were $1.1 billion in prison expenditures and another $109 million in other prison-related expenses outside of the department’s budget like inmate education and training.

The state averages it costs 90 cents to $1 to feed one inmate, but at Piedmont it costs 86 cents to feed each inmate. There are 80 inmates at Piedmont who have specialty diets to include diabetic, vegan and kosher. Inmates stock, cook and bake the food and earn $1 a day.

Inmates use an identification card system with their pictures that includes other pertinent biographical information like their diet. Family can send an inmate money and its placed on the ID, but inmates can only spend $40 a week, Pinion explained.

Mike Williams is the assistant superintendent for programs that include treatment, enterprise and vocational programs, many of whom are instructors from Rowan-Cabarrus Community College and community volunteers.

Williams said the community volunteers are a big help and lead programs like Alcoholics Anonymous and religious services.

Every inmate has a job or is a part of a program assignment, which includes everything from janitorial, canteen, auto body and continued education.

Wichy said without the programs offered by the prison his choices would’ve been different.

Wichy looks at life differently because of the opportunities he feels he’ll have once he’s released.

“It’s had a profound affect with my family,” he said of his changed perspective.