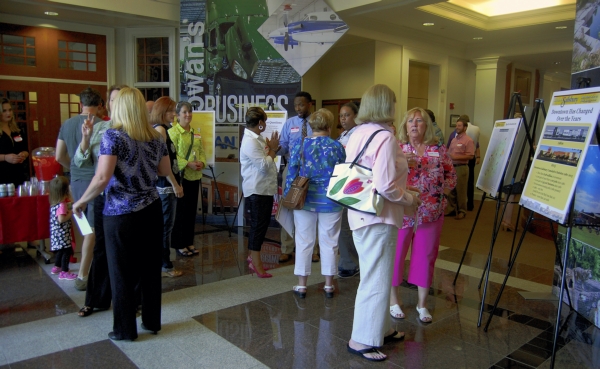 Amanda Raymond/Salisbury Post Downtown Salisbury, Inc. hosted an open house to allow local residents and business people to give their input on the improvements needed downtown.

SALISBURY — More than 100 community members, business people and community stakeholders stopped by a Downtown Salisbury, Inc. event to give their opinions on downtown.

Downtown Salisbury, Inc. sponsored the “Open House Series on Public Improvements” for the downtown area. The event was the first of three in the series.

From 5 to 7 p.m., people dropped in to the first floor of the Gateway Building to look at informational boards, talk to staff and submit their comments. New Sarum Brewery and DSI provided refreshments and drinks.

The purpose of the open house was to help DSI figure out what public improvements can help the downtown area thrive.

Paula Bohland, executive director of DSI, said the series is a follow up to the focus group research DSI conducted last year to get public opinions on downtown.

Bohland said DSI is working with the Centralina Council of Governments for the downtown improvement process.

“We felt it was imperative to find out what the public wants,” she said.

Citizens were able to answer questions related to supporting downtown businesses and attracting new ones and how to get more people to live downtown.

Open house attendee Reginald Brown thought there should be some type of grocery store downtown that would appeal to millennials.

“There’s nowhere to get groceries downtown unless you get in your car and drive,” he said.

He also said downtown needs to be more walkable and work on parking for downtown visitors.

Marietta Foster Smith, one of the first artists who was featured in the Rail Walk Studios and Gallery on Lee Street, agreed with Brown. She said along with more downtown residents, grocery stores that people can walk to are needed.

“We need some healthy food downtown,” she said.

Smith said she was excited about Morgan Ridge Vineyards and Brewery opening a brewery and restaurant downtown. She has also enjoyed the sidewalk improvements that have been done on North Lee Street.

Rexx and Marsha Rexrode said they love living downtown and feel safe. They also think there needs to be noise controls put in place to protect downtown residents.

“The residents need to be recognized as much as the businesses,” Marsha Rexrode said.

Rexx Rexrode also suggested a designated safe place downtown that is well lit and has security cameras where people can complete online transactions.

“I think it’d be great for Salisbury,” he said.

Lane Wallace said she thought DSI was doing a “wonderful job.” She would actually like to live downtown once the apartments that are going into the Wallace Annex building are complete.

For those who were not able to attend the open house, a link to the survey can be found on the Downtown Salisbury, Inc. website: https://downtownsalisburync.com/.