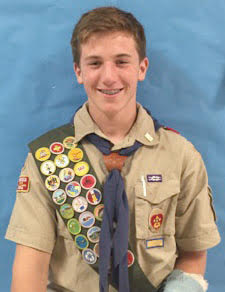 Blaine Shellhorn joined Cub Scout Pack 443, sponsored by St. John’s Lutheran Church, August 2008.  During the next five years, he earned his Tiger, Bobcat, Wolf and Webelos badges.  Blaine also earned religious awards God and Me along with God and Family.  In February 2013, he earned the Arrow of Light Award, the highest rank in Cub Scouts.

Blaine joined Boy Scout Troop 443 in March 2013 and earned Tenderfoot, Second Class, First Class, Star, and Life between 2013 and 2014.  During his Scout tenure, he has served as Scribe, Quartermaster and Liberian.  He was elected to and joined the Order of Arrow, BSA’s National Honor Society for experienced Scouts.  He is currently an Ordeal member of the Order of Arrow.  Blaine has earned 27 merit badges.

For his Eagle project, Blaine organized, designed and planned an outdoor learning center at Sacred Heart Catholic Church and School on the nature trail that his brother, Eagle Scout Walker Shellhorn began for his Eagle project. Creating the outdoor classroom area involved clearing brush, stumps, rocks, and debris.  He leveled, mulched and placed five concrete picnic tables to the area.  He also cleared an area to the creek and used stones from the property to make steps into the creek for easier access.  The trail has been used for the cross-country team, science classes and many other activities at the school.  His project involved over 20 people and over 220 service hours including family, friends, fellow Scouts, church members and Sacred Heart Staff and volunteers.  Since the completion of Blaine’s Eagle Project, Sacred Heart Parishioners have made additions to the trail, which is now 2 miles long with signage and mapping for the entire course.  He attended Sacred Heart from 1st through 8th grades.

Blaine is a member of First Presbyterian Church, a 2015 Confirmand, Senior High Youth Group, TWAM, Young Life and Crosby Scholars.  He plans to attend a mission trip to Mexico the summer of 2016 to assist in building two houses.   He has been a member of the Ellis Volunteer Fire Department for approximately 2 years and is certified in advanced open water scuba and shipwreck diving.

Blaine is the son of Douglas and Amy Shellhorn, the grandson of J. Robert and Brenda Anderson of Salisbury and the late W. B. and Faye Shellhorn.