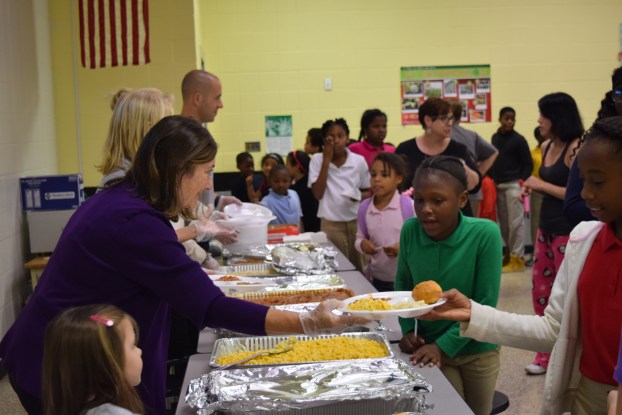 SPENCER — It’s been two months since Cybil Jones and Principal Katherine Bryant launched a community initiative called “Engage North Rowan,” and the two say that things have been going well.

The tables at the small cafeteria are packed with students, siblings, mothers and grandmothers enjoying a hot meal. Jones said the event draws an average of 125 people per week — many of whom come back, week after week.

And so far in its short life, the organization has received donations to fund meals and activities through mid-February 2017, Jones said. Tuesday, Jones and Bryant were presented a $2,000 grant from Innospec, and the two said that there have been many more community donors.

But it hasn’t been easy, either.

“We have adjusted and learned,” Jones said.

One major adjustment the organization has had to make is meal provision. When Engage started in late September, meals were provided and served by community volunteers. But finding someone to cook and serve a meal each week proved to be a challenge. Rather than leave things up to chance, Engage recruited caterer Debbie Suggs to provide meals each week. Jones said having meals catered costs approximately $300 per week.

Jones said they also quickly realized that there had to be more than a meal.

“If we don’t have anything planned after the meal, people leave,” She said.

The result was a lot of planning and streamlining. In its early days, Engage offered parent tips for helping students with their homework, or tutorials on technology. It’s something that’s still offered, but now evenings are also peppered with art and service projects.

Tuesday, students worked after dinner to put together field bags for Sole Hope, an organization that provides shoes to people in Uganda.

And something else they’ve learned? The kids look forward to it each week.

“I’ve heard kids say that they like eating dinner with their mom,” Jones said. “And I hope that’s what we’re fostering — a family meal.”

In the future, Jones said she hopes Engage keeps growing. She’s brought on board friend Melissa Bryan, who has plans to start an after-school and community center in Spencer. The center would pull a handful of families who participate in Engage and offer tutoring, childcare and other assistance. If all goes well and the project gets funded, Bryan said she hopes to open the center in August 2017.

“Obviously we’re still in the very early stages,” Bryan said, “but looking forward to what could happen.”

In the meantime, Engage plans to fundraise and write grants. Jones said meals can be sponsored in honor or in memory of someone, and she invited community organizations and members to host an after-meal activity or service project.

“The more outside community we can expose this community to,” she said, gesturing at the students, “the better.”

Anyone interested in sponsoring the meal or volunteering with the event should contact North Rowan Elementary School at 704-639-3042. All donations are tax deductible. Those planning to attend the meal should RSVP by filling out a form sent home with their child.