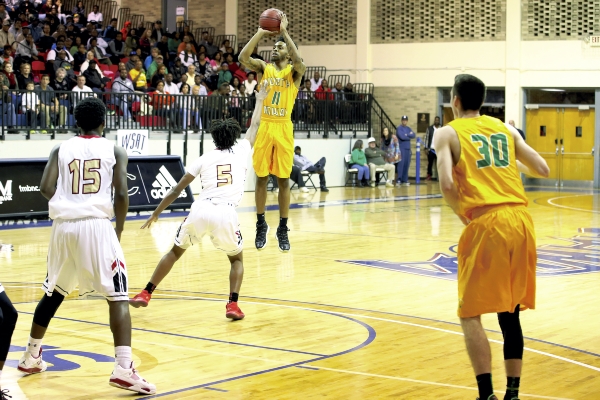 James Sipes/for the Salisbury Post ... North Rowan guard Joe Scott (11) goes up for a jumper during Saturday night’s high school basketball game against Salisbury. Scott scored 32 points and reached 1,000 for his career during the game, played at Goodman Gym. James Sipes/for the Salisbury Post …
North Rowan’s Henderson Lentz shoots as teammate Joe Scott (11) sets a screen. Lentz missed only one shot all night and he and Scott combined for 52 points.

Scott knew it. His teammates knew it.

“They kept asking me if I was going to get 32,” Scott said. “I was laughing. Come on — 32 points? Against Salisbury? Not many people thought I’d do it, and me either.”

But then Scott went out and got exactly 32, as the Cavaliers hammered their arch-rivals, 81-62, in front of a big crowd and on the big floor at Catawba’s Goodman Gym. Scott got his grand with a drive in the final minutes. He had a truly grand performance in the Central Carolina Conference showdown.  He was unstoppable. The 32 matched his career high. It was one more point than  he scored in Friday’s free-for-all against Lexington.

“The whole thing was poetic,” North senior Henderson Lentz said. “Joe gets 1,000 and he gets it against Salisbury and at Catawba. This was a different kind of game, a conference game with a Christmas tournament atmosphere. It was a lot of fun, and Joe was great.”

A lot of Cavaliers were really good, including Lentz, who scored an efficient 20. Freshman monster Chaz McCombs (6-foot-3, 240 pounds) and Brevin Goodlett  also had strong outings.

Tre Oats battled for the Hornets on the glass and scored 22 points, but most of his teammates stayed quiet.

“Our worst game of the season,” Salisbury coach Bryan Withers said. “Just awful defense. Scott had so many straight-line drives at the rim. We kept subbing on defense because we never did what we were supposed to do. It was like guys were trying to rest on defense.”

Salisbury  (10-5, 3-2 CCC) has lost players in recent days, notably explosive guard Shaleek Williams. Withers said that’s changed  roles  and minutes, and the Hornets are adjusting. Having said that, North (10-8, 5-1 CCC) played a tremendous, relentless game with high-percentage shooting and probably would have beaten anyone in the conference or the county.

“I thought we were very mentally ready to play a big game,” North coach Andrew Mitchell said. “I knew it even in our shoot-around. Scott and Lentz had the right words to say to their teammates. We were ready.”

Oats, 6-foot-6, with a long wingspan and a lot of blue-collar effort, personally made  it a dogfight for 12 minutes. Salisbury led 21-20 in the middle of the second quarter, but Scott roared to the hoop to put  North back on top. Lentz head-faked his way to a pull-up jumper, and then Goodlett flew in for  two huge stick-backs in a row for a 27-20 lead. When Josh Ellis found the range on a 3-pointer, the Cavaliers were up 10 and surging.

“Goodlett had a great game,” Mitchell said. “He does a lot of things that don’t show up in the scorebook.”

Lentz closed the first-half scoring with one of his five 3-pointers, and the Cavaliers led 37-27 at the break.

“We were playing great team ball,” Lentz said. “And when we do that, we’re tough to beat.”

Lentz stayed hot in the third quarter, but the Hornets  got two 3-pointers off the bench from Maliek Holmes and  a last-second tip-in by Oats to stay within 57-44 at the end of the period.

“Oats was  a handful and we let him walk straight to the block too many times,” Mitchell said. “We also talked about Will Leckonby (Salisbury’s bomber made three 3-pointers), but we let him get open a few times. We did a pretty good job against (point guard) Trell Baker. We knew we had to stay  in front of him because he makes Salisbury go.”

With North leading 66-53 with four minutes left, Scott seized the game by the throat. He would score 14 in the final  quarter.

“North was just a lot tougher than we were,” Withers said. “We were soft. They were tough. They were a lot more ready to play this game than we were. Adversity is going to come in a game like this, and we weren’t ready to face it.”

The final dagger was thrust in the Hornets’ collective hearts when Lentz drove and kicked back out to Scott for a straight-on 3-pointer. Scott, known as a stick-back guy in his younger days, calmly buried the bomb with 2:24 remaining. The lead was 19, and it was all over.

“Lentz is a brother to me, and he’s the reason I’ve become a better shooter,” Scott said. “I used to shoot straight at the rim. He taught me how to get a little more air under the ball.”

North lost six out of seven games in an ugly stretch in December and early January, but it’s obviously a different team now. Mitchell turned the leadership reins over to Scott and Lentz, and their young teammates are getting better.

“They’re starting to get it,” Scott said with a smile. “We’re coming along.”

Scott has been lights-out since moving to point guard, and he’s elevated his team.

North beat Salisbury for the 12th straight time, an amazing stat for such an intense rivalry. It wasn’t supposed to happen again this season, not with Jalen Sanders gone, but the Cavaliers got in the first punch and looked good doing it.

“We’re at that place right now where we’d rather for a teammate to score than to score ourselves,” Lentz said.

That’s a good place to be.