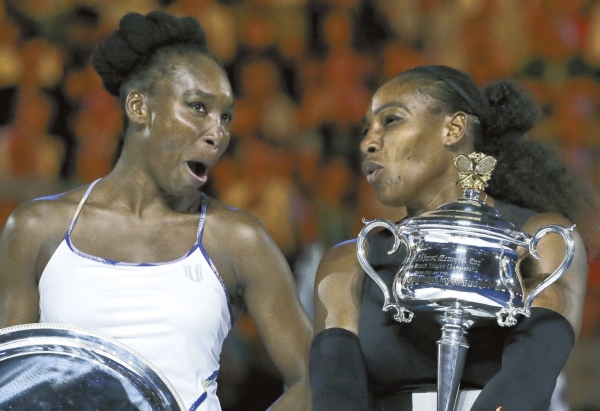 MELBOURNE, Australia (AP) — More than seven years after her last Grand Slam title match, Venus Williams would be forgiven for being a little nervous when she stepped inside Rod Laver Arena to face her sister, Serena, for the Australian Open championship.

She embraced the occasion instead.

It was Venus who was smiling during warm-ups and looked far looser at the start of Saturday’s match — not her sister, the 22-time major winner, who double-faulted three times in a single game to drop serve.

And when Serena eventually settled down and overpowered Venus to win her seventh title in Australia and set an Open-era record with her 23rd Grand Sam title, Venus was gracious in defeat, as she’s had to be on so many occasions against her sister.

For her, just getting to this stage again — playing at the end of a Grand Slam, in a packed arena with a title on the line, was a victory in itself.

“I felt ready. I mean, I haven’t played in a final for a number of years, but I don’t think it’s something you forget,” she said. “I mean, I played a good amount of them, so experience was right there for me.”

When Venus revealed in 2011 that she’d been diagnosed with Sjogren’s syndrome, an autoimmune disease, few expected she’d return to the same dominating presence that saw her win seven Grand Slam titles, including five at her favorite tournament, Wimbledon. Her ranking fell outside the top 100 as she coped with her illness and injuries, and from 2011 to 2014, she only advanced past the third round at a major once.

Venus kept going, though, even as the early-round losses continued to mount and questions about retirement came up time and again.

Those questions are still asked, but she’s become used to brushing them aside. And her recent career renaissance — she’ll rise to No. 11 in the rankings next week — suggests she’ll continue to be a force in the sport for however long she wants to play.

“I feel motivated to continue, to continue to go out there and hit the ball the way I know I can,” she said. “There’s only things I can improve on, to be honest, and to build on.”

Serena is making history, but Venus is setting her own marks these days, too. Her gap of 14 years in between appearances in the Australian Open final (2003-2017) smashed the previous record of seven years. Her 7 ½-year break in between Grand Slam finals (Wimbledon ‘09-Australian ‘17) also broke the previous record by six months. At 36, she’s the oldest finalist in Australia in the Open era.

And if anyone doubts her passion, her unbridled joy after defeating CoCo Vandeweghe in the semifinals said it all.

“I tried to contain myself. It was so hard. That was me containing myself,” she said with a wide smile. “You have to enjoy your moment when you get it.”