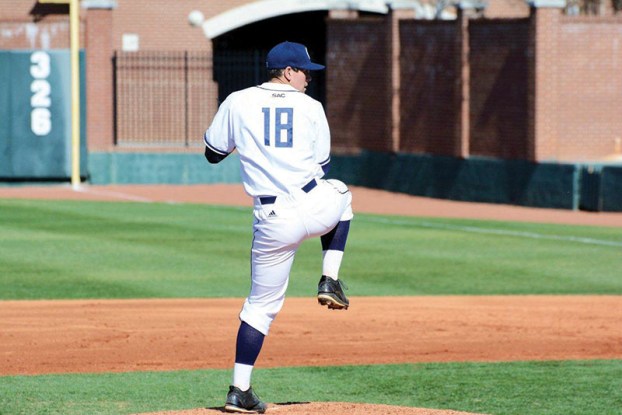 SALISBURY — Catawba freshman southpaw Hunter Shepherd was attired in a No. 18 jersey, but he may as well have worn a badge, a holster and cowboy boots.

There’s a new sheriff in town, and Shepherd quickly restored order at Newman Park on Sunday after a chaotic Saturday doubleheader that included 21 home-run trots. There were zero homers whacked on Sunday, as Catawba beat Shippensburg, 6-4.

Shepherd (1-0) earned his first college win, while Catawba (5-3) completed a weekend sweep of the Raiders (0-3) from Pennsylvania.

Shepherd, who pitched into the seventh inning, credited Mother Nature and Catawba catcher Zac Almond for his success.

“We watched the ball fly on Saturday, but we knew that might happen with the wind blowing out,” Shepherd said. “On Sunday, the wind had changed and was blowing in. We talked about that. It also helped that Zac had seen their hitters on Saturday and knew how to pitch to each guy.”

Shepherd, a home schooler who starred for the Rowan County American Legion team in recent summers, only fanned one, but he didn’t walk anybody. The two biggest pitches he threw resulted in double-play grounders to middle infielders in the first and second innings.

“I executed pitches and relied on my defense,” Shepherd said. “They made some excellent plays.”

Freshman third baseman Jackson Raper was helping Concord Robinson win a 3A basketball state championship at this time last season, but now he’s helping the Indians. His run-scoring double to the left-center gap followed a triple by Malachi Hanes and gave Catawba a 1-0 lead in the second inning.

Catawba broke a 1-all tie in the fourth. Nick Coble’s single and Chance Bowden’s opposite-field double set up a two-run single up the middle by Hanes on a 1-and-2 pitch. Red-hot Luke Setzer then singled through the left side for a three-run inning and a 4-1 lead.

Bryce Fowler’s run-scoring single in the fifth made it 5-1, and Catawba went up 6-1 after six.

Most of the drama occurred in the top of the seventh. That’s when Shepherd finally ran into trouble when he allowed back-to-back singles with one out.

Catawba coach Jim Gantt visited the mound. The hitter was Cash Gladfelter, a lefty, and Shepherd showed enough confidence that Gantt stuck with him.

Shepherd got ahead 0-and-2, but Gladfelter fouled off several pitches to stay alive. Finally, he smacked a 2-and-2 pitch down the right-field line for a two-run double, and it was 6-3 game. That double came on Shepherd’s 85th — and last — pitch.

Right-handed reliever Ryan Kahny entered and yielded a single to the only man he faced. With two men on and the  tying run at the plate, Gantt called on Russ Weiker. The veteran lefty, who is working his way back from a broken elbow, got two punchouts to end the inning.

“Weiker has a pretty good handle on things,” Shepherd said.

Catawba held on. Weiker pitched a scoreless eighth. Closer Bryan Blanton came in for a 1-2-3 ninth that included two strikeouts.  Blanton owned a save and Shepherd owned his first win.

“Shippensburg is a tough club, and sweeping them gives us all more confidence,” Shepherd said.

The jump from home school competition to Division II baseball is a large one, but Shepherd has the tools to handle it.

“I expected college baseball to be hard, and it has been hard and strenuous,” Shepherd said. “But the seniors on this team have made it a lot easier. They’ve made it fun. Winning is fun and Catawba is known for winning baseball games.”