Wind advisory for Rowan from 8 a.m. Thursday to… 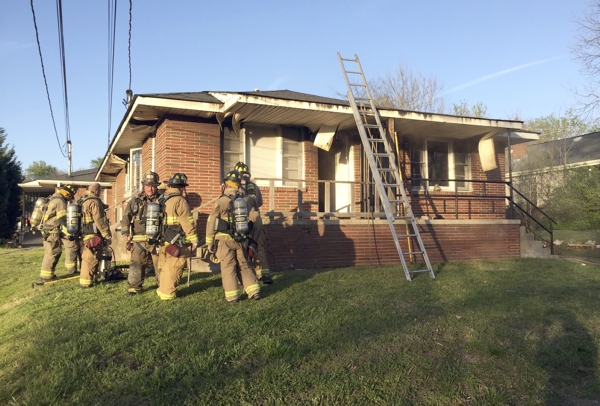 Salisbury firefighters responded to this duplex fire Tuesday on Old Wilkesboro Road. Officials say a child was playing with a lighter in the closet and started the fire, which displaced 11 people. Photo by Salisbury Fire Department

SALISBURY — A number of people were displaced by a Tuesday evening fire at an Old Wilkesboro Road triplex. Officials said the accidental fire was caused by a child.

Flames were showing through a bedroom window when firefighters responded before 6:45 p.m. at 1314 Old Wilkesboro Road, at the corner of Alexander Lane. The fire was in a bedroom on the right side, said interim Battalion Chief James Farley.

The connecting apartments received smoke damage. An apartment in the back was connected by a breezeway, but all three shared a common attic and smoke got into the attic space, Farley said.

Farley, who also investigated the fire, said a child found a lighter and set a pair of pants on fire inside a closet. The child was not injured.

A total of nine people — five adults and four children — were displaced. The Hanford Dole Chapter of the American Red Cross is assisting the families with financial help for food, clothing, lodging and other essentials, as well as comfort kits containing personal hygiene items.

One of the residents, who requires supplementary oxygen, was advised not to return to the apartment because of the smoke damage, Farley said.

Farley said fire crews responded quickly to put out the fire from the outside and then went inside to further extinguish it.

Firefighters also responded to overcooked food at a Myron Place residence. Smoke in the home prevented the family from returning inside. The Red Cross is also assisting that family.