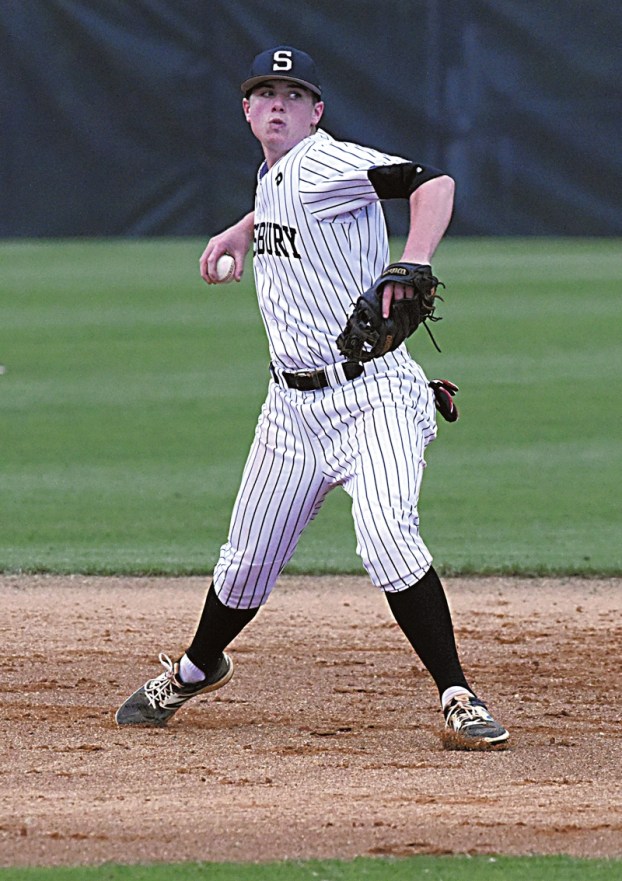 “I know Joe well and I feel bad for him,” Herndon said. “But I would’ve felt even worse if my guy had lost.”

Herndon’s guy was Griffin Myers, a junior right-hander, who quietly threw most of the game in the shadows, while Harrison, a Belmont Abbey-bound senior, owned the spotlight.

“I hadn’t been on for a while, but I was on tonight and I had my good fastball,” Myers said. “I pounded the strike zone and trusted my defense to keep us in the game.”

Myers got so much soft contact early in the count that he didn’t top 90 pitches until the eighth. So he was still around at the end. Harrison struck out 11, but his night ended in the seventh when he reached the pitch count limit of 105. He actually threw 107, as pitchers are allowed to finish the batter they’re working on.

“I struck out a lot, but the problem with that is you throw a lot of pitches,” Harrison said. “I have a lot of confidence pitching here, always pitch well here, but it was almost like I struck out too many.”

North (8-12, 3-5 CCC) scored in the second when the Hornets contributed two errors around a Steven Thurston single.  There was nothing fluky about the run North scored in the third to go on top, 2-0, against Myers. Mark Parra doubled to the right-center gap, just out of the reach of right fielder Blaine Shellhorn, and Henderson Lentz whipped a crisp RBI single to send Parra home.

North had chances to expand the lead, but Myers made key pitches, especially when North had runners at second and third in the sixth.  He doggedly kept the deficit at 2-0.

“I thought for a long time that except for Myers, we got out-competed,” Herndon said. “We weren’t putting many balls in play, and when we did, at least until the seventh, North made every play.”

Harrison took the mound for the seventh, and with the 6-7-8 batters coming up for Salisbury, there was no reason to think North wasn’t going to win, 2-0. Harrison got two quick outs. Then he got two strikes on Hut Smith. But Smith made contact with a short stroke, a little bouncer up the middle for an infield hit.

“I just kept telling myself to put it in play,” Smith said. “Don’t try to do anything special.”

When Jack Fisher’s routine grounder was booted, Salisbury had the tying runs on base. Salisbury leadoff man Bo Rusher stepped into the batter’s box, and North held a mound meeting.

“I was getting close to the pitch-count limit,” Harrison said. “We wanted to make something happen quickly on Bo’s at-bat, and we went after him.”

Rusher’s hot grounder at freshman first baseman Jordan Goodine was one of the harder balls the Hornets managed to stroke. It went through him into right field, and the Hornets had their first run. Herndon, coaching at third, saw right fielder Parra air-mailing a high throw home, and Herndon waved Fisher all the way home from first. It was 2-2, after he crossed the plate.

“He never stopped running,” Herndon said. “If he hesitates anywhere, he can’t score.”

Harrison’s night was over. Lentz relieved him, struck out Myers, and sent the game to extra innings.

Myers pitched around the Hornets’ fourth error in the top of the eighth,. Then things got wild with one out in the bottom of the inning.

Blaine Shellhorn walked on a close pitch that had been a strike most of a wide-zone night. Lentz picked Shellhorn off, but he’s fast and beat the relay throw to second. Then Joe Steinman slapped a roller toward first. Goodine gloved it, just as Steinman ran past him, and tried for a swipe tag. North fans were sure he made that tag. Salisbury fans weren’t upset with the safe call.

North coaches argued that call the rest of the night. Head coach Tommy Small survived. Some of his assistants didn’t.

The Hornets (12-9, 6-3 CCC) had runners on the corners with one out, and the bases were filled after an intentional walk. Lentz, still the calmest person in the park, got a strikeout for the second out. Then, once again, the towering Smith was in the batter’s box with the game resting on his shoulders.

Smith’s slow bouncer toward shortstop won the game. A senior, he came through twice on Senior Night, just by putting balls in play when  teammates were striking out.

“I saw my pitch and I hit it,” Smith said. “Those last two innings we did a great job of getting guys on base, and we capitalized on their mistakes. We won a game that looked lost, and I know I’ll never forget this.”

As thrilling as the win was for the Hornets, it was agonizing for the Cavaliers.

“Joe Harrison was at his best tonight,” Small said. “One two-out hit and we win it for him, but we couldn’t get it. But we have to put it behind us now. We’ve got to try to come right back.”

The teams will play tonight in Spencer where it will be North’s Senior Night.