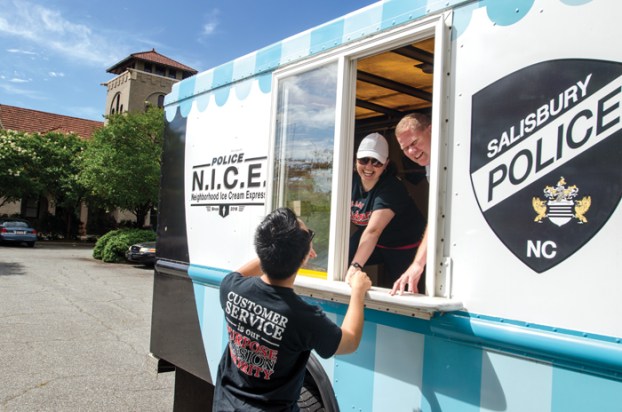 Souwan Kiengkham, bottom, Jennifer Silvia, left and Officer Joe Miller, right, talk through the window of the Salisbury Police Department's Ice Cream truck before they go pick up some ice cream to hand out around town on July 7, 2017 in downtown Salisbury. Kristi Craven/Salisbury Post

Police use treats to engage with community in a sweet way

“The first year that we got it, I volunteered to drive it in the Christmas parade. And so it was kind of an assumed project from that point,” Miller said. “You know how it is. If you volunteer to do something, ‘Oh, well, it’s yours, run with it.’”

“But I will tell you, it’s actually a lot of fun to take the ice cream truck out and to meet the kids,” he said.

In the seven months since the department acquired the truck – called the N.I.C.E., or Neighborhood Ice Cream Express, truck – Miller has been trying to get it out into the community as often as he can.

So far, he estimates that since its maiden voyage at the Holiday Caravan in December, the truck has been to six events.

Miller said that event organizers usually pay for the frozen treats – mostly ice cream sandwiches or Nutty Butty bars – and the officer who is assigned to drive the truck hands out the treats to anyone who wants one.

Miller said organizers usually buy more treats than needed for the event in case they see kids not associated with the event who want ice cream while driving to or from the destination.

“If somebody calls and requests it, then I usually try to accommodate that (and) try to find an officer who’s willing to volunteer his time,” Miller said.

Miller said the Police Department doesn’t always have enough officers available to send the truck out when it is requested.

But Police Chief Jerry Stokes said that usually, the events are ones that officers had planned to attend anyway.

Some of the events have included this year’s Juneteenth celebration – a day that celebrates the end of U.S. slavery – and Movies in the Park, a bimonthly summer screening at City Park.

Stokes said he hopes the ice cream that officers hand out will facilitate conversations with residents, especially kids.

“I’ve experienced talking to people that are 30-something years old, and they can still remember the (school resource officer) that they had in middle school,” Stokes said. “Well, you know, this is kind of hoping to build that sort of relationship. It’s a very, usually short relationship or short conversation. But it’s a very positive interaction, and that’s what we’re looking for.”