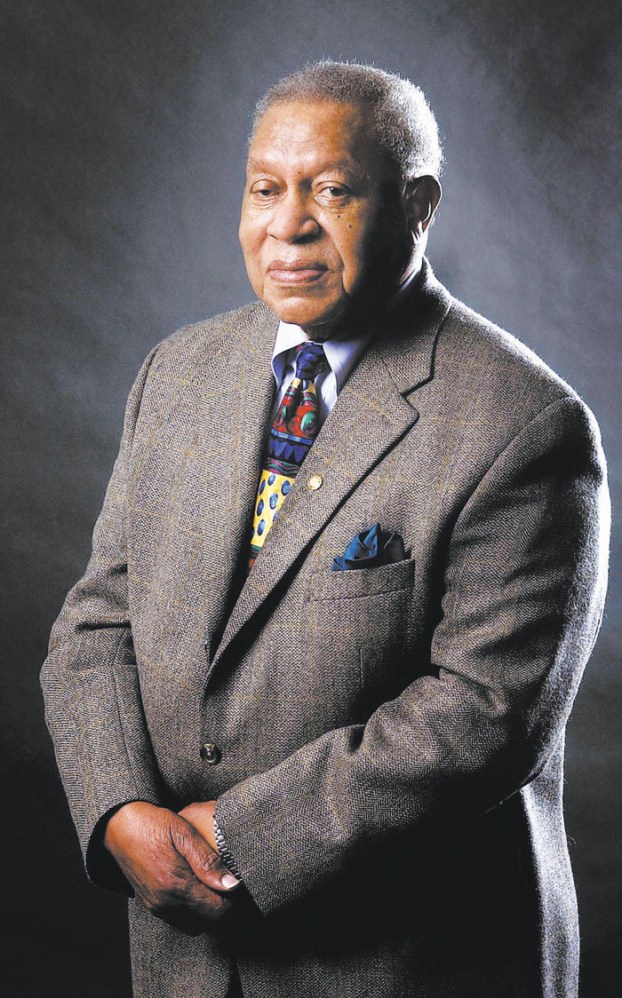 Post File photo …
George C. Knox, during his days as an educator in the Rowan County schools.

He was elected to the Salisbury-Rowan Sports Hall of Fame in 2010, 60 years after his playing days, and offered an eloquent and heartfelt acceptance speech at the Civic Center.

Knox lived a long, admirable life of service. His list of accomplishments includes many firsts for African Americans in Rowan County as an educator and politician.

World War II shaped Knox into the person he became.

I visited his house eight years ago, sat down to talk to him about baseball because my fellow Hall of Fame committee member Wilson Cherry had told me astounding tales about him. I’d been informed he’d competed against Jackie Robinson. That story was true.

Knox’s family tugged out scrapbooks with faded clippings and photos of soldiers and ballplayers. Knox had been inducted into the North Carolina A&T Hall of Fame in 1986 for what he’d accomplished on baseball diamonds, but the bulk of our conversation drifted to World War II. I’d spoken to World War II veterans before, including my late grandfather, but never to an African-American veteran of that conflict. Knox’s experience was different. His perspective was different.

Knox lived in a comfortable home off North Cannon Boulevard, that thread of southern Rowan County where Kannapolis meets Landis.

Growing up, he went to Landis’ Aggrey Memorial, a school for black students during segregation. He graduated from Aggrey in 1940 and had plans to enroll in Livingstone College where several family members already had graduated. He explained that he didn’t go to Livingstone right away because a blue suit was required for Livingstone freshmen, and he didn’t own one. He was driving a truck for Linn Mills, saving money to buy that suit, when bombs fell at Pearl Harbor on Dec. 7, 1941, plunging the United States into World War II.

Knox’s draft notice from the U.S. Army came shortly after that. The blue suit went on the back burner.

Most of those early black draftees were assigned to non-combat units — relegated to supply, maintenance and transportation duties.

But Knox was in a combat role. He became part of the 614th Tank Destroyer Battalion, basically an all-black unit but commanded by white officers. As the name implies, their job was to destroy tanks. Their firepower consisted of anti-tank guns towed by a hybrid vehicle known as a half-track. In theory, the half-track steered like a jeep, but with the pulling power of a tow truck and the all-terrain capability of a tank.

The 614th trained for months. Months became years, as tank-fighting weapons systems were altered and tweaked and had to be re-learned.

Much of Knox’s training time was spent at Fort Hood in Killeen, Texas. That’s where he encountered Robinson. Robinson was more than a great baseball player, he was skilled in football, tennis, track and basketball. Knox had a reputation as the “roughest man” in his outfit. That meant he got to guard Robinson whenever the 614th took on its sister unit, the 761st Tank Battalion in basketball games.

The 614th arrived in France in October, 1944, four months after the massive D-Day landings at Normandy that included 1,800 African Americans. The 614th was involved in brutal and bloody combat in the bitter winter of 1944-45, including the Battle of the Bulge.

Knox explained that black troops generally got the oldest equipment and were deemed the most expendable. His job was to drive a half-track or truck. He was the best mechanic in his outfit, so he always drove the last vehicle in every convoy. That way whenever he came upon a stalled truck, he could make repairs, get it running, and then move on to the next problem.

With pain in his eyes, Knox told stories of a lot of well-aimed shells from tank destroyers that failed to penetrate the hides of heavily armored German tanks. A lot of his comrades were buried in fields in France, Belgium and Germany. He figured there were as many casualties in his battalion as men who came back whole.

When the shooting stopped in Europe in the spring of 1945, Knox was part of an occupation force stationed in Austria. For several months, soldiers waited solemnly for their transfer to the Pacific to fight the Japanese.

But the war in the Pacific ended abruptly, hastened by the two atomic bombs that were dropped in August, 1945, and Knox was spared from more bloodshed.

The way troops killed time after the war was by playing softball. The fields in Austria weren’t large enough for baseball games, but Knox walloped softballs so far that word got around. There were white officers on hand from schools in the Midwest who were interested in recruiting black athletes. Knox got offers from Nebraska, Iowa and Kansas.

Knox was shipped home shortly before Christmas, 1945. He was discharged the first week of 1946 and he had time to think back to his early days in baseball.

Knox fashioned his first bats himself out of solid pieces of ash, hickory or maple.

Every community had a town baseball team when he was growing up. Actually four of them, two white and two black and divided into boys and men. When he was 14, Knox debuted for the Landis men in a game across the Davie line in Cooleemee. His mother, Moena Sherrill Knox, a huge baseball fan, drove him to the game. Someone on the Landis team got sick, and Knox got to play first base. They threw Knox a curveball in the ninth inning and he smacked a game-winning grand slam over a fence and onto a rooftop. He got to first base and looked up. He saw the ball still sailing and heard the crowd shouting.

He smiled like a teenager whenever he told that story. And if there was a little embellishment over the years, who could blame him?

They played plenty of football and basketball when Knox was a youngster, but it was baseball 75 percent of the time. The games were in sandlots and open fields,. They played every afternoon and after supper until it got too dark to see. After that shining moment at Cooleemee, Knox launched homers at Gastonia and Thomasville. After that, even white fans were coming to watch Knox swing the lumber. No one else was hitting them out.

When he came home from the war, Knox was scarred, but not bitter. He was driven, determined to make his life count, and he knew a college education was the next vital step. While he had offers from major schools, he wanted to stay in the South to be reasonably close to his family. He narrowed his college choices to Tuskegee and Hampton, but then he made a fateful trip to Greensboro to North Carolina A&T because friends asked him to ride along.

A psychology professor at A&T took one look at Knox and sprinted to get the football coach/AD Bill Bell and the baseball coach Tubby Gentry. A few days later, Knox was officially an Aggie. On scholarship.

A right-handed masher, Knox said he “hit for distance, with no scrub hits.” He batted .320, played left field and served as the cleanup hitter for powerful clubs. A&T beat professional teams while Knox was there.

Shaw provided the stiffest opposition, but Knox led North Carolina A&T to conference championships in 1947 and 1948. The Aggies rode a bus called “Raggedy Ann” to Philadelphia and Washington, D.C., and beat everyone in sight.

Knox had pro baseball offers after college. He turned them down, confident that he could make more of an impact in the education field.

He did his practice teaching close to home at Kannapolis’ Carver High, then landed his first full-time teaching and coaching job in Warren County.
He returned to Rowan County when he was appointed principal of segregated R.A. Clement School in Cleveland in 1956.

Each year, the George Knox Scholarship  is given at West Rowan  High School, sponsored  by the R. A.  Clement Alumni Association, composed of alumni and friends of the former R. A. Clement High School.

“I’ve had my share of tough days,” Knox told me once. “But I’ve had some others as good as anyone’s ever had.”