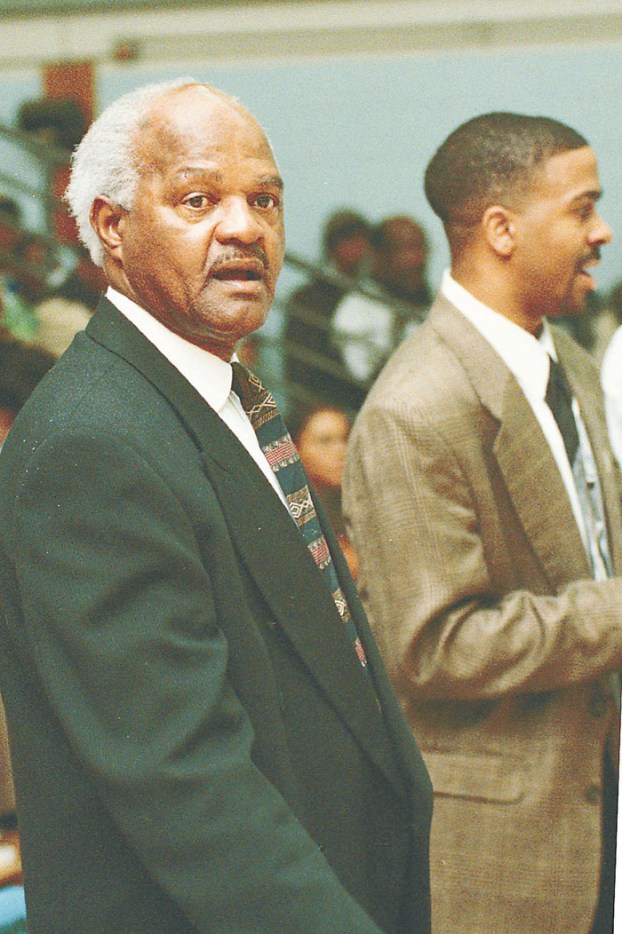 Salisbury Post File photo/James Barringer ... Charles McCullough, during a Livingstone home game on Jan. 16, 2000. He died on Friday at the age of 84.

McCullough’s friend in Charlotte, East Mecklenburg High’s Rudy Abrams, had taken the head coaching position for Livingstone football, and Abrams made calls to convince McCullough to come to Salisbury to join him.

McCullough could’ve simply enjoyed a quiet retirement playing golf — he shot in the 70s — but he was seeking one last challenge in his coaching career. The monumental challenge he chose was reviving the Blue Bears.

McCullough resigned from Livingstone in May, 2000.  His record coaching the Blue Bears for six seasons was 51-105, which is one of the most misleading records ever. He lifted the program from close to nowhere to respectability and competitiveness. Livingstone is frequently successful in basketball now under coach James Stinson. That success can be traced back to McCullough.

“Coach McCullough was a great man and a great coach,” said North Rowan boys coach Andrew Mitchell, who performed double duty for the Blue Bears in the 1990s, assisting McCullough with the men’s team while serving as head coach for the women’s team. “His knowledge of the game of basketball was just unbelievable and the adjustments he could make during a game were amazing.  As a coach, I’d put him up there with anyone, with Dean Smith, with Mike Krzyzewski — with anybody.”

McCullough’s basketball playing days were at West Charlotte. Then he played at North Carolina Central, where he learned fast-paced team basketball from one of the all-time greats, John McLendon.

McCullough coached very briefly in South Carolina before getting the chance to coach West Charlotte. He would be at helm of the Lions from 1960-1993. His career record  was 583-247. There were five state championships and two runner-up finishes. West Charlotte won 20 conference titles on his watch and made the state’s Final Four 16 times.

Four years ago, when the NCHSAA’s 100th anniversary celebration included the announcement of “100 Coaches to Remember,” a list that encompassed all sports, McCullough was on there. His career at West Charlotte spanned generations of athletes.

In the 1960s, he coached  North Carolina Sports Hall of Famer Dwight Durante, who would score a school-record 2,913 points for the Catawba Indians while helping breaking down color barriers .

In the 1990s, McCullough won state titles with Jeff McInnis, who went on to an All-Atlantic Coast Conference career at UNC.

Not content to rest with all that prep success, McCullough came to Livingstone, inheriting a downtrodden program that had gone 1-25 in the 1993-94 season and had a men’s basketball scholarship budget of $40,000. Tuition at Livingstone was about $9,000 per year then.

“He prepared his teams, like no one I’d ever seen, and the guys started running his stuff,” Mitchell said. “He seldom raised his voice, but he was one of those people that you knew when he was angry, and he commanded respect. Nothing ever rattled him. One thing I remember is that every morning when he came to work, he brought you something. Maybe it was a piece of fruit or maybe it was just a peppermint, but he wanted you to know every day that you worked with him that you were appreciated.”

After his second season at Livingstone, in 1996, McCullough was honored as the first CIAA Coach of the Year the program had ever had.

Livingstone seemed to be moving in reverse as the 1997-1998 season dawned. McCullough was firm when it came to his athletes making academic progress toward degrees, and half the Livingstone was suspended when the first game arrived. Down to four players, Livingstone forfeited. The Blue Bears played the next five games with five players. By the second semester, Livingstone had 11 on the roster, but the team suffered one heartbreaking disaster after another. The Blue Bears pushed favored opponents to overtime six times, but kept coming one shot or one stop short. They finished the regular season 3-21 and 1-16 in the CIAA.

But McCullough’s diligence paid off with a historic victory in late February, 1998, at Winston-Salem’s Joel Coliseum. Chanta Weathers, a guard who entered the Livingstone Hall of Fame in 2013, made the go-ahead jumper late in the action against St. Paul’s, and after decades of frustration and first-round losses, Livingstone finally had won its first CIAA tournament game. Always a low seed, Livingstone had always made a hasty exit from the conference’s marquee event, but that night changed a lot of things. Players such as Weathers, Antar Crawley, Derrick Wyche and Sheldon Payne are remembered because of that tournament.  Livingstone reached the semifinals before bowing out.

Livingstone wouldn’t make the tournament final for the first time until 2011 and wouldn’t win the title until 2014 when Stinson led the Blue Bears to a historic triumph in Charlotte. But it all started that night in 1998.

Word of McCullough’s death brought sadness to a lot of households, including the Mitchells. Mitchell’s wife, Sandra, was a cheerleader for McCullough’s basketball teams at West Charlotte.

McCullough’s legacy lives on through coaches like Mitchell, who guided the Salisbury High girls to back-to-back state 2A titles in 2009 and 2010 and led North Rowan’s boys to a 1A crown in 2011.

Mitchell said everything he runs at North can be traced back to the influence of  Johnson C. Smith coach Steve Joyner or to McCullough.

“Coach McCullough was a great coach, but an even better man and person,” Mitchell said. “He’s one of the greatest men I ever had a chance to know.”