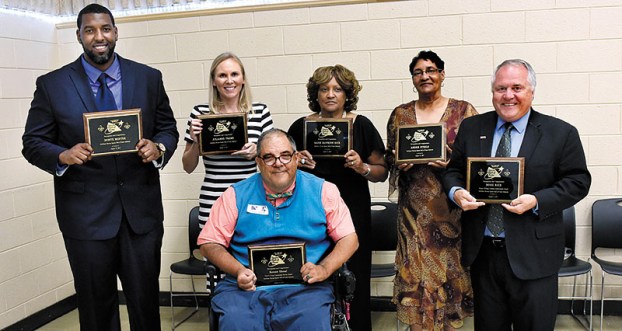 It’s noteworthy that two women were inducted in the same class for only the second time. Only 11 of the 109 Hall of Famers are women. Most of the ladies have been inducted for basketball accomplishments, but Treme was a tennis phenom while Sadie Hawkins Rice was a combination basketball/tennis legend.

Hall of Famers of both genders concentrated on thanking family and coaches. That theme hasn’t changed after 17 induction ceremonies.

“The people who helped me the most had different last names, but they all had the same first name, and that was Coach,” said Shoaf, who accepted the Fred M. Evans Community Service Award from Evans’ family.

The new inductees covered a span of 40 years, from 73-year-old Sadie Hawkins Rice, who shined at J.C. Price and Livingstone College in the early 1960s, to 33-year-old Donte Minter, the genial giant who led West Rowan to a 30-0 basketball season in 2002 and is the No. 2 all-time scorer for males in Rowan County prep history with 2,087 points.

“My coach at West, Mike Gurley, brought a lot of different guys together, and we played together for him and we played well,” Minter said. “Going 30-0 was a tremendous ride.”

Treme, a four-time individual state tennis champion for Salisbury High from 1993-96, lectures for a living, so it was no surprise she offered the longest acceptance speech. Treme had a lot of people to thank, a train of coaches that included Scott Mitchell, Bill Leonard, Jeff Childress, Mike Leonard, Reid Leonard, Bill Lee and John Walton. Lee ran four laps around the tennis courts with her after she achieved her fourth straight state title. Walton helped her translate her tennis focus into academic brilliance at Elon.

The high school feats of Minter, Treme and Andre Steele, a national-level track and field phenom during his days at Salisbury in the late 1980s and early 1990s, culminated with state championships.

“I found something that I loved to do,” Shoaf said.

Doug Rice has put in 30 years at the top of his profession as a familiar voice on the Performance Racing Network.

Sadie Hawkins Rice was rewarded Sunday for both longevity and patience. She may have been the best female basketball player in J.C. Price history, most improved player one year and team MVP the next three, from 1960-62. Besides being a prolific basketball scorer, she was a good enough tennis player to compete in doubles on the Livingstone men’s team. She won three senior city tennis championships. She also passed down her basketball genes. Her grandson, Tyrese Rice, was outstanding at Boston College and still stars in Europe.

“At first, I was scared on the basketball court, afraid to shoot,” Rice said. “But everyone kept yelling at me to shoot, and then I did. The ball went in, and it was over from there.”

She goes back far enough that she can remember an uncle giving her $2 when she had a big game. That was enough for a drink, a hot dog and popcorn — with change left over.

The new Hall of Famers rose from humble beginnings.

Treme’s parents met on a tennis court, but she tried different sports before settling on tennis. Her first modest goal was just to make the team at Knox Middle School and to get a team shirt. That was the start. Dedication made her of the county’s all-time greats — 114-6 for the Hornets, the leader of three dual team state championship teams, as well as the owner of those four individual titles.

Minter’s mother (the late Patricia Goodlett Minter) and uncle (Roy Goodlett) were stars at Dunbar in East Spencer, but when Minter was a rising freshman at West Rowan, Gurley thought he might need to start out on the jayvee team. The first minute of the first summer camp game provided evidence Minter was ready for the varsity.

“Well, he sort of spun and then he was by himself and laying the ball in,” Gurley said with a laugh. “We knew he’d help us.”

The 6-foot-8 Minter’s 44-point game at Salisbury on opening night of the 2000-01 season is still West’s single-game record. West went 109-11 during Minter’s era, 59-1 in conference games. Minter’s combination of fundamentals, grace and power took him to Fork Union Military Academy, Virginia, Appalachian State and the pro ranks in Europe. He shot 60 percent for ASU in 2007-08.

Steele lives in Texas and was unable to attend Sunday’s ceremony, but his mother, Sara Steele, and grandmother, Hattie Steele, accepted his induction plaque. Steele was such a marvelous sprinter that he competed with “USA” across his chest in international competition and he was part of USA Today’s All-USA team for 1991. His high school feats for the SHS Hornets included winning four straight state championships in the 400, plus a 200 title.

Doug Rice, who accepted the Horace Billings Lifetime Achivement Award, got his start in radio on game-of-the-week football broadcasts for WSTP/WRDX for Rowan high schools, as well as Catawba College. One of his biggest thrills in broadcasting was Catawba’s 2-0 gridiron win against Carson-Newman in 1987.

Rice, who achieved national attention by broadcasting both the Indy 500 and Coca-Cola 600 on Memorial Day, 2015, explained things clicked for him as a racing broadcaster after he figured out he was in the “transportation business.”

“It was my job to transport that guy listening via his car radio on the highway to the race track where I was,” Rice said. “And for the last 30 years I’ve been watching cars make left turns.”

As a student at West Rowan Junior High, Doug Rice had first-hand interaction with Knox, Rowan’s first black principal at one of the schools that had previously been all-white.

“That was a difficult job at that time,” Rice said. “George Knox handled it with grace.”