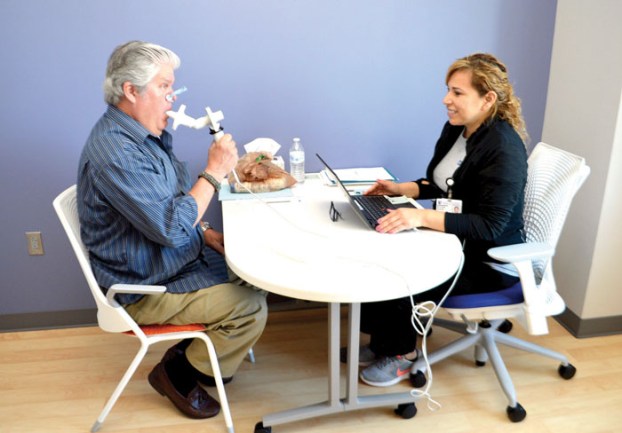 Submitted photo Will Estep, left, takes a breathing test as part of his participation in the MURDOCK COPD Study at the N.C. Research Campus in Kannapolis.

After decades of smoking, Concord man wants to help researchers KANNAPOLIS — Like many people who grew up in the 1960s, Will Estep started smoking. And he started young.

One day after school, while working on a Virginia farm, Estep took his first drag on a cigarette. He was just 12 years old.

“Smoking was the thing to do,” said Estep, 61, a Concord resident who is the 100th participant in the Murdock COPD Study, managed by the Duke Clinical and Translational Science Institute in Kannapolis. “Everybody smoked.”

Estep was smoking regularly by the time he was 13. Born in Ohio, Estep moved 43 times before he turned 18. His father bought and sold houses, and the family never stayed in one place long enough for him to make many friends. Cigarettes became his constant companion.

As an adult, Estep was smoking two or three packs a day.

By his mid-50s, his health had started to fail. Breathing became difficult. Walking uphill was tough. He had to stop riding a bicycle and racing motorcycles, his favorite hobbies.

“That was fun to do. But I gave that up about eight or nine years ago,” Estep said. “I didn’t really know what was going on. I just took it as getting old, but that wasn’t it.”

Five years ago, Estep took a breathing test during his yearly physical and learned that he has COPD, or chronic obstructive pulmonary disease. As his smoking-related symptoms worsened, he had to leave his job as a machinist and go on disability.

“I just don’t do a lot of things I used to do. I’m not as active as I used to be,” he said. “I can do a few things around the house, but it takes me a lot longer. I used to go outside and mess around the yard. What might take someone else a day takes me two or three days.”

When Estep heard about the Murdock COPD Study, he decided to enroll and became the 100th participant. Duke researchers are studying the severity of smoking-related symptoms in 850 people and following the progression of their lung function and symptoms over five years. People do not need to have COPD to qualify for the study, but they must be current or former smokers.

It’s an observational study, meaning participants do not receive treatment. The idea is to study smoking-related symptoms in a real-world setting to better understand the impact and progression of disease, according to Scott Palmer, director of respiratory research for the Duke Clinical Research Institute and principal investigator for the study.

Even if he doesn’t benefit directly from this research, Estep said he feels his participation in the study could help make a better life for other people suffering from smoking-related symptoms and disease.

“The more information that we have, the better off we are going to be,” Estep said. “And there might be a way to make the treatments better. It might be too late for me, but not for the next generation.”

Current or former smokers who are at least 40 years old may qualify to join the Murdock COPD Study. Eligible participants can have COPD or emphysema, but it’s not required.

No geographic restrictions apply. During the five years of study follow-up, Duke’s Translational Population Health Research group in Kannapolis will contact participants every six months to measure changes to their health status.

Estep quit smoking when he was diagnosed with COPD. Today, he can’t pick up heavy items without becoming winded. He still takes his dog, Sookie, to the park, but he becomes fatigued while walking up and down hills and must stop to rest.

“People need to take care of their lungs the best they can. Research can help,” he said. “If I’d known back then, I would have never smoked cigarettes. I hope I can use my experience to help others.”

To learn more about the Murdock COPD Study, call 704-250-5861, send an email to murdock-study@duke.edu or visit www.murdock-study.org/COPD. Participants will be offered compensation for each in-person visit.

The Duke Clinical and Translational Science Institute supports Duke programs, faculty and staff to facilitate scientific discoveries into improved outcomes for patients. The Translational Population Health Research group in Kannapolis, which is part of the institute, was founded to develop a community registry and biorepository called the Murdock Study.

Today, the study has more than 12,000 participants. The Kannapolis TransPop group manages a variety of research projects focusing on biomarkers that provide a deeper understanding of health and disease.