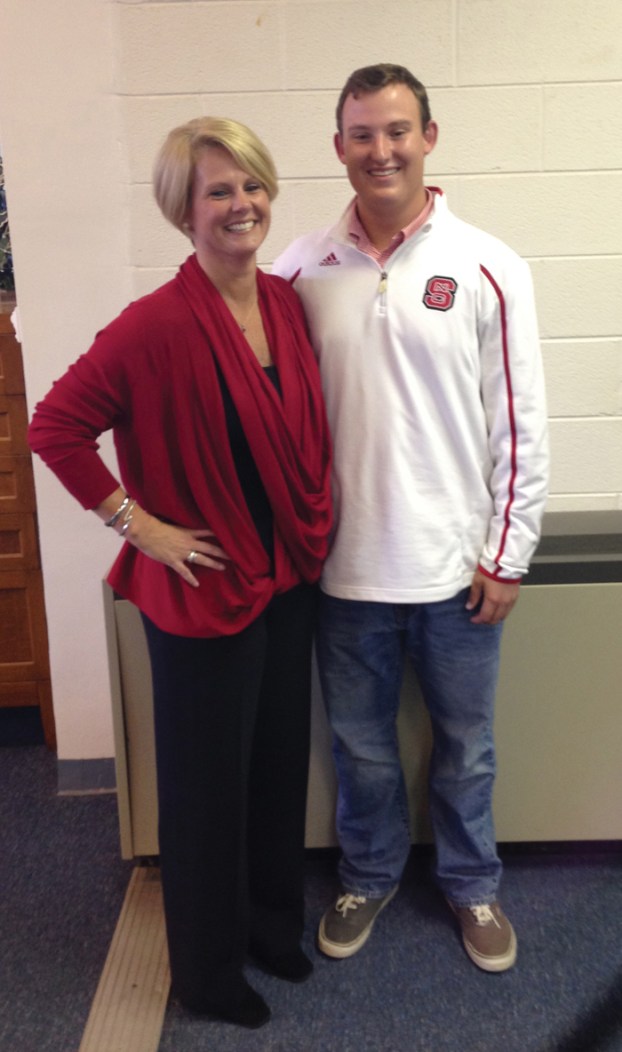 ‘I’m not a quitter’: N.C. State’s Davis Richards is determined to overcome narcolepsy

RALEIGH — Davis Richards and his coach bump fists as they chat on the practice green at N.C. State’s University Club. Davis just told Press McPhaul, who’s in his first year with the Wolfpack as men’s golf coach, that he passed a test in his professional golf management class.

“He’s doing great,” the coach says. “He’s been on the shelf, but he’s started to regain his old form.”

The kid can’t seem to catch a break.

“In golf,” his coach explains, “you’ve got seven or eight different things that push on you. You’ve got your fundamentals, and your tempo, and you’ve got to have good decision making skills. But if any one of those is missing, it doesn’t matter how good you are.”

It’s the same thing with narcolepsy, the condition Davis was diagnosed with two years ago.

“There are not many things that just one treatment or one pill will make it go away, and I think that’s what he’s learning.”

It was Davis’ dream to play golf for a Division I university. He realized that dream his sophomore year at South Rowan High School, when he verbally committed to play at State. He did well in school with not much effort, he admits. But he lived to play golf.

Things started to change his junior year, when he starting falling asleep in class. It happens to a lot of teenagers, but Davis started canceling plans because he was tired. When he was too tired to practice golf, his mom, Erika Beattie, took notice. After a sleep study, Davis was diagnosed with Restless Leg Syndrome. The medication seemed to work, and he felt better. He graduated, and off he went to State.

“I started my freshman golf year strong, but academically not so much,” Davis remembers. “I had a pretty good GPA in high school. I thought, maybe college really is this hard, but then I thought, there’s no way it can be.”

He’d study for hours for tests, only to fail. His mom works for the N.C. Department of Public Instruction, and her work often takes her to Raleigh. She studied with him the next time she was in town. Davis knew the material, his mom discovered.

He failed the test.

Davis had been born prematurely, and his mom thought some issues had finally caught up with him. He was tested again over Christmas break.

“In my mind, we had already checked it off,” Erika says. “We thought he had Restless Leg Syndrome.”

But a psychologist found Davis’ IQ had dropped 35 points, an extremely rare occurrence. After a second sleep study, a neurologist told Davis he had a severe case of narcolepsy.

But he was also troubled.

His mom thought he was drinking or using drugs. He’d done neither.

“I don’t blame her for thinking that,” Davis says.

Before his diagnosis, he says, “I just felt dumber. I didn’t even know what to think.”

People thought he was just lazy, Erika says. “But you can’t be a Division I athlete and be lazy.”

The sleep study showed he fell asleep almost immediately, but didn’t get that deep sleep required to make you feel refreshed each morning. If he can get to sleep, he’s OK. Some nights, he has insomnia. Other times, he sleeps so deeply that he’ll sleep through several alarms — special alarms for hearing-impaired people. He’s been through about six kinds of medication — he’s prescribed stimulants — before he found one that works OK.

“You just have to manage it the best you can,” he says. “Some of the drugs were pretty good, and some were pretty bad. I literally cussed my parents out once, and I was in such a rage I didn’t know what I was doing. I was the Ragemaster. It was frustrating.”

“You don’t want anything to be wrong with your son,” Erika says. “You have that pity party, but then you imagine 10 things that could be worse.”

Erika, her husband, John, and Davis’ dad, Eric, have all learned that they’ve had to educate people across the board about Davis’ diagnosis.

“Even doctors don’t know much about narcolepsy,” Erika says. “Davis does not get sleepy like the average person gets sleepy. Lots of nights, he can’t sleep at all.”

Davis has learned he has to try to stay on a good sleep routine — a huge challenge for a college student.

“I try to go to bed at 10:30 every night, but that doesn’t always happen,” he says. If he stays out late the night before, he pays the price the next day.

He has 6:30 a.m. workouts two to three mornings a week with the golf team, then class, lunch, and then he heads to the golf course ’til about 7. By the time he has dinner and a shower, it’s about 8:30 — and time for homework.

He carries a class load from 15 to 18 hours a semester, and plays golf six days a week, he says. “When you don’t have formal practice, you still want to get out there and practice.”

His grades now, he says, are “OK, not great.” He has academic accommodations because of his condition. Davis is learning how to be his own advocate.

Golf, he says, is still his “safe place.”

“A support group is not my cup of tea,” he says. “If I have a bad day, I just go play golf and forget about everything else.”

Agreeing with his coach, Davis says that coping with narcolepsy is similar to improving in golf. “You gotta figure out how to get better at it. I struggle with it, but it’s like life in general. You just want to be the best you can at what you’re doing.”

Davis hasn’t thought much about life after graduation, and how being on more of a set schedule can help him manage his narcolepsy.

“I’m just trying to make good grades and chase that little white ball around,” he says.

Erika is hopeful that a narcolepsy specialist at Duke can help Davis better manage his condition. But that’s not until January.

Davis still goes to golf practice, and walks around while his teammates are hitting.

“Yeah, it sucks,” he says of his arm injury.

Does he offer any advice?

“Lord, no!” he says, grinning. “They wouldn’t listen anyway.”

When he’s not on the golf course or in class, he enjoys playing Xbox — maybe a little too much, he admits. “But that’s about it.”

His major is professional golf management. He could end up a general manager at a golf club, or a teaching pro — anything in the golf business, he says. “I just didn’t want to sit an office all day from 8 to 5. Golf’s been good to me, and I wanted some way I could give back once I got older.”

Despite the rough patch during his diagnosis, Davis and his mom are still really close, he says.

His dad lives in Kannapolis, and John and Erika recently sold their China Grove home and are renting an apartment in Concord. They’ve considered moving to Raleigh to be of more help to Davis. Every morning, his mom calls to make sure he’s awake.

“I’m trying to step back since he’s in college,” Erika says, “but I’m finding I’m having to step in more than I have in awhile.”

She’s even gently encouraged him to complete his degree online. He’s made As in the online classes he’s taken, because he’s able to work when he’s most alert. It would, she notes, simply be a different path to the same goal. But, his mom says, Davis loves State and everything it has to offer.

“He has had a lot of fantastic experiences being on the golf team,” she says.

Davis is determined to stay.