With the end of TPS, thousands of Rowan County… 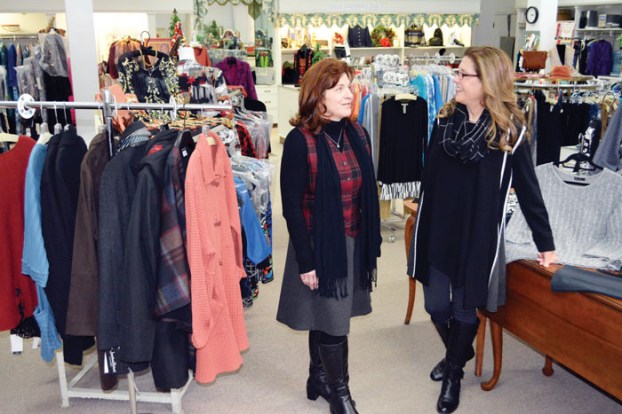 Measmer and Keziah chat at Virginia’s on a recent afternoon in downtown Kannapolis. Keziah has worked at Virginia’s for 33 years. Her grandmother, Bea Davis, opened the shop in 1942 with Lucy Dease, her silent partner. Photo by Susan Shinn Turner, for the Salisbury Post.

KANNAPOLIS — After 75 years in business in downtown Kannapolis — 33 of those years on West A Street — Virginia’s Dress Shop is moving.

“We will celebrate our 75th anniversary when we move into our new building,” says Melanie Davis Keziah, the shop’s owner.

The dress shop moved for the first time in 1985 to make way for Cannon Village, owned by California businessman David Murdoch, who later created the N.C. Research Campus.

“We did well because we weren’t an outlet store,” Keziah notes. “We had first-quality clothing. We purchased everything in Atlanta and New York. We didn’t have but two or three of an item. There are many facets to being a good buyer. You do not buy for yourself, but what certain customers would like.”

The ever-stylish Keziah learned the art of buying from her grandmother, the late Bea Davis, who opened the store in November 1942 with Lucy Dease, her silent partner. Dease and her sister also owned Epearle’s, another well-known dress shop of the era.

Davis’ husband, Edgar, built many of the furnishings and millwork that remain to this day — and that will move to the new location.

The most recent move has been necessitated by the redevelopment of downtown Kannapolis. The street on which Virginia’s is now situated will be the entrance to the new baseball stadium. Keziah was told in December 2016 about the move. Keziah learned she’d need to change locations by October 2017, a date which was later extended. There was one problem, however. She did not care for the building the city offered to her. Driving through town, she wished that someone would tear down the empty yellow house beside Morton Dentistry on South Main Street and build something there.

Time passed, and she went to the Village Grill last March to pick up an egg salad sandwich for her grandson, Davis Petty. She mentioned to one of her customers about her predicament.

Sitting nearby was Rick Flowe, a city planner and owner of N-Focus on South Main Street. Flowe provides planning and other services to small towns across North Carolina.

“I had just finished with the architect on a design for a mixed-use building to house my office on the ground floor with apartments upstairs,” Flowe says. “I was having lunch at Village Grill, and I could hear Melanie and another lady talking about what was ahead. Melanie said, ‘I just don’t know what to do.’”

“Hey, Melanie,” Flowe says, because everybody in Kannapolis knows everybody else. “I might be able to help you with that — but we’ve got to do it right now.”

The two met the next day, and agreed to work together. Flowe changed the design of the building to accommodate retail space downstairs and moved his offices upstairs.

“I’m tickled to death to have such a fine establishment in our building,” he says. “I hope they’ll be there another 75 years.”

Virginia’s will still have its signature awning — a new one — for that upscale, “Fifth Avenue entryway” that everyone loves.

The lease with Virginia’s will recoup lost apartment rentals, Flowe notes. “I feel like I’ll have lower turnover in the retail space. I really didn’t want to put apartments upstairs, but I didn’t want to build a one-story building, either. I think it’s a win-win.”

Virginia’s will only be closed for a short period of time to accommodate the move to 315 S. Main St., Suite 100. Keziah and longtime employee Rebecca Measmer will work hard in the interim. The new shop will have four nice, roomy dressing rooms, and a more defined formal wear section. It will have a sitting area, and a sportswear section. Keziah has designed the shop in Country French decor featuring grays and soft winter colors.

She has no interest in chrome and hardwood, she says. “I want it to be our sophisticated look. I’m not throwing out what our tried-and-true customer expects from Virginia’s. I do need to cultivate new customers, but we want our customers that we know and love to be a part of Virginia’s forward move.”