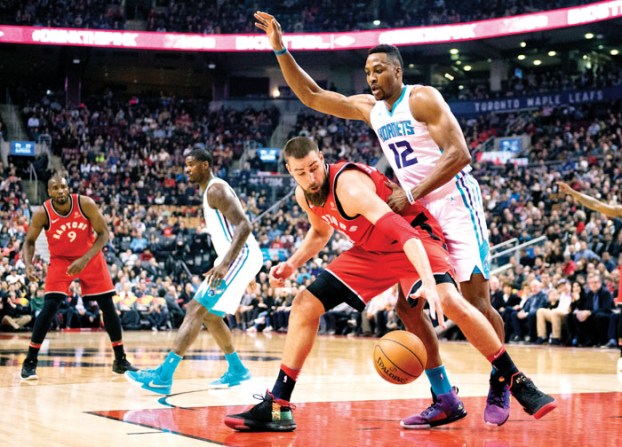 TORONTO (AP) — After three double-digit losses to Toronto, the Charlotte Hornets finally turned in a strong performance against the Raptors.

Ahead by 13 points to begin the fourth quarter, Toronto saw its lead dwindle to two before DeRozan and Lowry made key 3-pointers.

“It wasn’t a pretty game,” Raptors coach Dwane Casey said. “Last year we probably would have lost that game, but we were mature enough to make plays, the right plays.”

Serge Ibaka scored 17 points and Lowry had 14 points and 10 rebounds as the Raptors completed their first season sweep of Charlotte since 2006-07. Toronto improved to 26-5 at Air Canada Centre, the best home record in the NBA.

“They’re playing as well as anyone in our league at this point,” Hornets guard Kemba Walker said. “They move the ball really well, they trust each other.”

Fred VanVleet and C.J. Miles each scored 12 points for the Raptors, who have won four straight since an overtime loss to Milwaukee on Feb. 23.

Walker scored 27 points and Dwight Howard had 10 points and 10 rebounds for the Hornets, who lost their third straight, all on the road. Charlotte is 10-21 away from home.

Despite the outcome, Hornets coach Steve Clifford said he liked what he saw in the final quarter.

The Hornets are 5.5 games behind Miami for the final playoff spot in the Eastern Conference with 18 games remaining.

“We need to build on what happened here tonight in the fourth quarter,” Clifford said.

A downcast Walker wasn’t as encouraged as his coach.

“We lost,” Walker said. “That’s all I’m really looking at right now until we watch the film.”

The Hornets cut the deficit to two, 88-86, on a three-point play by Lamb with 5:11 left in the fourth quarter. Lowry answered with a 3 for Toronto and, after Walker split a pair at the line, DeRozan added a corner 3, giving Toronto a 93-87 lead with 3:22 remaining.

“We just tried to do what we could to stay in the game and win it down the stretch but those guys are really good,” Walker said. “They just made plays.”

This was the first time in four meetings with Charlotte this season that the Raptors failed to score at least 120 points. Toronto had won the past three meetings this season by 13 points or more.