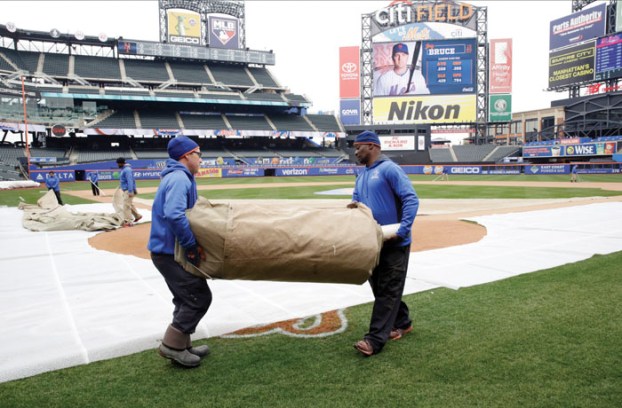 Workers prepare to lay a tarp out to protect the field during batting practice before a New York Mets workout, Wednesday, March 28, 2018, in New York. The team's opening day is Thursday against the St Louis Cardinals. (AP Photo/Kathy Willens)

NEW YORK (AP) — The Houston Astros will take the field as World Series champions for the first time. Giancarlo Stanton, J.D. Martinez and Eric Hosmer will wear new uniforms following an odd offseason when tanking teams helped sink the free agent market. First-time managers will fill out lineup cards, home run and strikeout totals will be watched closely, and out West, a Japanese import will try to do it all.

Opening day is here. The 162-game grind of the regular season starts Thursday.

“It’s a full-circle moment,” Astros ace Justin Verlander said ahead of Houston’s opener at Texas. “Just being out there Game 1 of the season, everybody is so high on expectations and so excited about the upcoming season, the unknown, what’s going to happen with their team. It’s a unique atmosphere.”

The March 29 start date is the earliest in Major League Baseball’s history excluding international openers, and all teams were scheduled to play on opening day for the first time since 1968 — the last year before the American and National Leagues split into divisions.

Cincinnati’s traditional NL opener was postponed a day in advance because rain is forecast, and so the Reds will begin against Washington on Friday. Cincinnati had not called off its opener because of weather since 1966.

“I’m just excited about standing out for the anthem and getting it started,” Washington manager Dave Martinez said before the Nationals arrived in the rainy city. “The boys are ready. I’m ready.”

Detroit’s Ron Gardenhire is the lone retro hiring, joining the Tigers after leading Minnesota from 2002-14. Baseball has undergone a quick evolution since he left the Twins dugout, favoring upper cuts, long balls and a quicker hook for starting pitchers.

A record 6,105 home runs were hit last season, topping the 5,963 in 2000 at the height of the Steroids Era. Strikeouts set a record for the 10th straight season at 40,104 and sacrifice bunts fell to their lowest level since 1900 at 925. The 59 complete games set a record low for the third straight season and 27 individual shutouts were the fewest since 1878.

Having seen the explosive use of defensive shifts, batters tacked in their approach.

“You’re starting to understand that a ball on the ground is essentially an out,” Los Angeles Dodgers manager Dave Roberts said. “So they made adjustments in their mechanics, their approach to elevate the baseball that’s going to turn into more flyballs, more homers, some swing and miss.”

There is one slight change in the format this year, with the regular season extended by three days to 186 to create more off-days — an accommodation players negotiated in their labor contract.

It remains to be seen whether another alteration will be major or minor — MLB wants to speed up the pace and instituted a general limit of six mound visits per game without a pitching change, whether by a manager, pitching coach or player. Owners want to cut the average time of a nine-inning game, which reached a record 3 hours, 5 minutes last year, up from 2:46 in 2005.

Players for the most part don’t care how long their games take, as long as their team wins.

J.D. Martinez left Arizona for a $110 million, five-year contract with Boston, Hosmer departed Kansas City for a $144 million, seven-year deal with San Diego, and Yu Darvish ended his short stay with the Dodgers for a $126 million, six-year agreement with the Chicago Cubs.

Those were the only nine-figure contracts obtained in a historically slow free agent market that saw dozens of players still without agreements when spring training camps opened in mid-February.

Atlanta, Cincinnati, Detroit, Miami, Oakland, Pittsburgh and Tampa Bay all are in rebuilding cycles, with little hope of earning one of the 10 postseason berths.

Commissioner Rob Manfred responded that at any given time, several teams usually choose to go with youth.

Dispersed veterans included Stanton, who joined the Yankees to pair with fellow slugger and reigning AL Rookie of the Year Aaron Judge and Gary Sanchez in a powerful batting order. Evan Longoria and Andrew McCutchen joined the Giants as San Francisco tries to contend again following a last-place season.

The Yankees open at Toronto, and the Giants start at the NL champion Dodgers facing familiar foe Clayton Kershaw. Other openers have the Cubs at Miami, St. Louis at the Mets, Pittsburgh at Detroit, Boston at Tampa Bay, the Los Angeles Angels at Oakland, Milwaukee at San Diego, Philadelphia at Atlanta, Washington at Cincinnati, the Chicago White Sox at Kansas City, Cleveland at Seattle and Colorado at Arizona.

Two-way Japanese star Shohei Ohtani is expected to be a designated hitter in at least one of the Angels’ first three games and to make his first major league start on the mound Sunday.

He’s not the only one stumbling into the season. On the eve of opening day, Kansas City said All-Star catcher Salvador Perez will miss up to six weeks after spraining the medial collateral ligament in his left knee when he missed a step while carrying a suitcase on stairs in his home Tuesday.