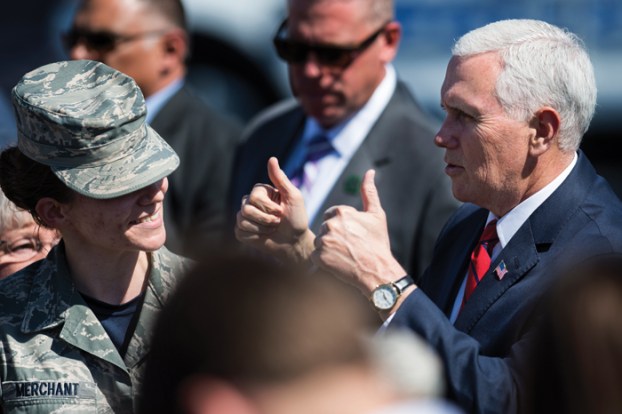 Vice President Mike Pence gives thumbs up to people in the crowd at Charlotte Douglas International Airport on April 20, 2018. (Photo by Rebecca Benson)

Vice President Mike Pence sounded a lot like a presidential candidate when he visited North Carolina last week. Is it possible he could be the Republican nominee in 2020?

“Promises kept,” Pence said repeatedly during his Charlotte talk as he touted recent tax cuts and other actions of the Trump administration. The unspoken message seemed to be “and more to come.”

Trump has already declared himself a candidate for 2020, and Pence would be the last person to challenge him in a primary. But should something happen between now and 2020 to change Trump’s mind, Pence would be in a good position to secure the GOP nomination. Appearances like the ones he made in Greensboro and Charlotte could lay the foundation for a presidential run.

In Greensboro, he toured the area hit by a tornado last weekend. “Our hearts go out to all the families that were impacted by Sunday’s storm,” Pence said. In Charlotte, he went to an America First Policies gathering to talk about the tax overhaul law alongside Sen. Thom Tillis, Rep. Robert Pittenger and others. The vice president also attended at least two private events, a fundraiser for a congressional candidate and a Republican National Committee meeting.

Where Trump is brash and impulsive, Pence is measured and disciplined. The men could not be more different. Should the Republican field open up in 2020, that difference could be Pence’s challenge — and his salvation.

Locals react to Chauvin verdict, reflect on work still to do