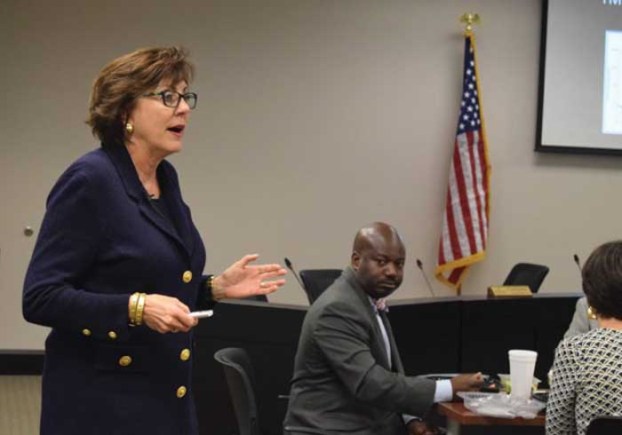 'I’m nervous about it, and I’ll be up front and say we don’t have all these plans yet. We’re creating this,’ says Rowan-Salisbury Schools Superintendent Lynn Moody of the renewal school district opportunity. Rebecca Rider/Salisbury Post file photo

SALISBURY — In some ways, the Rowan-Salisbury Board of Education’s decision last week to become a “renewal” school district raises more questions than it provides answers.

The school system isn’t just the only district in the state to be given the charter-like flexibility; it’s also the first in the state’s — and possibly the nation’s — history.

To be granted charter-like flexibility means that, once the plan is approved by the State Board of Education, Rowan-Salisbury Schools will no longer have to conform to state mandates on the calendar, use of funding, personnel requirements, teacher and teacher assistant allotments, state prescribed testing or curriculum, to name a few.

For local teachers, it opens a wealth of possibilities and would give them the freedom to try new teaching methods or to return to tried-and-true ones that have been abandoned by the state.

While the final decision and approval rests in the hands of the State Board of Education, Rowan County residents are left wondering: What does it mean, really, to be a “renewal school district?” And what would charter-like flexibilities look like across the county’s 35 schools?

In an interview Wednesday, Moody dreamed up a few possibilities.

“This is our first attempt to put in words ‘What is it?’” Moody said. “… I’m nervous about it, and I’ll be up front and say we don’t have all these plans yet. We’re creating this.”

Though she has made it clear that nearly all changes will be left up to teachers, Moody said she could see a few different paths local schools may travel.

“We’ve been on this pathway, but rules and regulations prevent us from operating this way. Well, now we hope that these flexibilities will help us get there,” Moody said.

Currently, 16 schools in the district are “restart schools” that are already granted charter-like flexibilities. But the law allowing continuously low-performing schools this freedom has a few caveats. One of those is that each school must submit a restart plan that includes a “focus” or theme, of sorts.

China Grove Elementary, for instance, decided to start the 2018-19 school year with a curriculum that integrates the arts into every subject, and it is using its funding and personnel flexibility to hire an art teacher.

North Rowan High School chose to focus on innovation and preparing students for the real world, aligning its calendar with that of Rowan-Cabarrus Community College.

Under the new statute, however, schools won’t necessarily need a “theme.”

“They may or may not,” Moody said. “They’ll have to determine the curriculum and the design of the work they’re given.”

Schools may choose an individual focus, choose not to have one or choose to spread a curriculum strategy throughout the community. For example, Salisbury schools may play to their strengths and further bolster initiatives such as Salisbury High’s advanced manufacturing program and Knox Middle’s STEM lab.

“They’re heavily invested in STEM,” Moody said “… That’s been the centerfold of their work. We would be remiss for them to move away from that. … So I can see that Salisbury strand, K-12, going, ‘Well, that’s our curriculum focus.’”

It’s also likely that school choice will come into play down the road, district administrators said. Currently, high school students have a measure of choice if they want to attend one of the district’s high school academies, which focus on particular career paths and areas of technical skill.

Once the dust has settled with the renewal statute and educators are comfortable in that role, it’s possible that all students, at any grade level, could make that decision. It’s one of many freedoms now open to the district, though it’s anyone’s guess whether teachers and administrators will choose that path.

The district will have total control over its calendar. Whether that’s determined by individual schools or by the Board of Education is still up in the air.

“For example, will (the board) allow 35 schools to have 35 calendars?” Moody asked. “Probably not. But they haven’t had time to talk about that yet, so I can’t answer that.”

One possibility she sees is for the board to create two or three calendars, then give each school the chance to pick one. But again, she emphasized, that is merely a possibility. Discussions about that calendar or any other plan have not even started.

The renewal statute also gives local schools a pass on state-mandated assessments. Rowan-Salisbury students would still have to take federal standardized tests like end-of-grade and end-of-course, but they now will have the option to skip North Carolina Final Exams. Elementary schools might even be able to opt out of state kindergarten assessments.

“You know, who knows if (kindergartners) are ready for kindergarten?” Moody asked. “A kindergarten teacher — not this darn assessment.”

It’s a point that perfectly illustrates Moody’s dream for the renewal district — placing everything in the hands of teachers. While the Board of Education will need to lay out a few hard and fast ground rules, the goal is for major decisions on curriculum, calendar and other issues to be the work of local teachers.

“Teachers are going to guide us in that work,” Moody said. “So I would be premature in providing answers. That would be saying, ‘I don’t really value what they’re saying; I’ve already got an idea of where we’re going.’”

So, will the school district have different calendars or curriculum? Will there be school choice, and will schools give state assessments the boot?

“That’s for teachers to decide,” Moody said. “I think they’ll decide that. I’m almost 100 percent positive they will. But if you don’t let them decide that, then you’ve just created a smaller bureaucracy.”

What she and other administrators know is that the process won’t be easy.

But with some helping hands and more than a little bit of elbow grease, the possibilities could be endless.