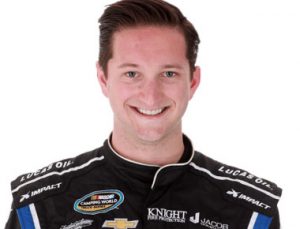 MOORESVILLE — Charges have been dropped against NASCAR Truck Series racer Jordan Anderson, who was accused a week ago of having a stolen vehicle.

The Rowan County Sheriff’s Office said at the time that Anderson, 27, bought a truck from Newfab Racecars owner Robert Newling in an unauthorized sale.

The investigation began Sept. 7 after the truck, which was at the shop to be repaired after a race in Texas, was sold. According to investigators, Newling sold the truck to Anderson even though it did not belong to Newling.

Investigators initially said Anderson was told the truck should not have been sold and was supposed to turn himself in but did not. The truck has since been returned.

Anderson said in a statement he’s been cooperating through his attorney, Darrin Jordan of Salisbury.

“In respect to the news that was published last week, I wanted to thank you all for your understanding in light of the situation and continued support of my character,” Anderson said in a statement.

“We’ve been cooperating with the investigation through counsel since I was notified about there being a potential warrant for my arrest while we were racing in Las Vegas,” he said.

The state said Anderson’s attorney was in constant contact with the Rowan County District Attorney’s Office and the race truck was delivered earlier this week to a location designated by the Sheriff’s Office.

“I continue to maintain my innocence in this matter, and the fact that I bought the race truck in good faith with a bill of sale, unbeknown of its history,” the statement said.

“This has been quite a humbling lesson in being a new team owner, and the importance of discerning who you do business with. I take great honor in representing to the best of my ability my fans, partners, and family; and am grateful for your grace, support, and prayers through this all,” Anderson said.

“Nine months ago when we put into action the idea and dream of starting up our own team to compete, the main principle was, and is, to have faith, respect, and integrity serve as the pillar to every action and decision that is made with ownership. My life verse has been and will continue to be Proverbs 3:5-6. I take great hope in knowing that God allows everything in life to happen for a reason and will apply what God has taught me through this as motivation to keep my relationship with him first in everything that we do.”

Charges of felony larceny of a motor vehicle against Newling remain in place. He is expected in court Nov. 21.