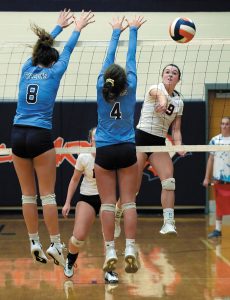 CHINA GROVE — West Rowan’s volleyball team had an opportunity to clinch the North Piedmont Conference championship, but Carson was an uncooperative host.

Playing in an electric gym on an emotional Senior Night for starters Mallory Weast, Grace Thomas and Nancy Gamewell, Carson overcame 29 kills by West superstar Tori Hester and beat the Falcons — 25-17, 26-24, 19-25 and 25-22.

“The energy in our gym was wonderful tonight,” Thomas said. “From the first, we were ready to go. Mallory, Nancy and (sophomore) Jaden Vaughn were great.”

Ranked eighth in 3A, Carson (18-3, 7-2) moved into a tie with fourth-ranked West (16-3, 7-2) for first place.  Both teams have a difficult match left, with Carson traveling to South Iredell on Thursday, while West hosts Statesville on what will be a “Dig Pink” Senior Night for setter Ava Link and libero Hannah Pratt.

West appeared to be the better, more athletic team when it whipped the Cougars with relative ease in Mount Ulla, 3-1, on Sept. 20, but Carson looked like a different team in its home gym —  more intense, more cohesive and making fewer mistakes. With Hales, Weast and Vaughn digging everything that was diggable, West didn’t get many easy points.

“Maybe we were too jacked for the game at West Rowan,” Carson coach Kelan Rogers said. “Players like Weast and Hales were too pumped up. Weast had 10 hitting errors at West, and that’s not her. I thought we played a disappointing match over there, but we played better tonight. A lot of times, it’s the home team that holds serve in these tough matches.”

Vaughn led the charge as the Cougars pulled away from an 8-all tie to walk away with the first set.

“Carson came out with a lot of enthusiasm, and we were playing timid,” West sophomore Kaylin “KK” Dowling said. “Once we got into the match, we gave our all, but Carson is a good team and they were playing really well.”

The second set was a killer for West, which trailed, 17-10, before catching fire, outscoring Carson, 12-3, and storming to a 22-20 lead behind Hester and Dowling.

When Rogers called timeout, down, 22-20, the set looked already lost.

But Weast, with Thomas feeding her, took over. Weast hammered the kill as the Cougars got the critical point out of the timeout to get within 22-21 and she had another kill to get within 23-22.

A kill by Kelcie Love made it 24-22 Falcons, and it was set point for West, but the Cougars fought it off. An ace by Weast tied it at 24-all.

Moments later, Gamewell won a battle at the net, and Carson was a 26-24 winner.

You don’t often blow a 17-10 lead, fall behind and still win a set, but the Cougars pulled it off.

Weast said there was no great strategic adjustment, just willpower.

“It was very intense, lots of excitement,” Weast said. “We just really, really wanted to win this one, and we played our hearts out.”

Hester, a high-flying junior committed to Troy University, overwhelmed the Cougars in the third set to prevent a sweep. She was getting kills from all over the court, tracking down impossible digs, whacking aces. When Dowling beat a block attempt by the Cougars, West had a 25-19 victory in the books, and it was 2-1.

“Tori is such a great player and she was just hammering it at us every time she had a chance to hit,” Weast said. “Honestly, it was just fun to play against someone like that and to play against a team as great as West is.”

Like the second set, West had the fourth set in its grasp, but let it slip away.

Hester and Dowling were still oaring, and when Pratt kept a point alive long enough for Hester to win it, the Falcons led 18-14, and appeared on the verge of forcing a fifth set.

But after Rogers used a timeout, Carson rallied one more time.

With the Falcons leading, 18-17, Carson seniors Thomas and Gamewell  perfectly timed their modest verticals for a combo block on the right side for 18-all. That may have been the biggest point all night. A kill by Gamewell  snapped the tie. Hester re-tied it, but a kill by Blackwell put the Cougars in front, 20-19. Then it was Gamewell again, another huge point, for 21-19.

Vaughn put the Cougars up 23-21 with a rocket. Dowling’s last kill cut West’s deficit to 23-22, but this was Weast’s night. She reached high over her head to acrobatically tomahawk a kill for 24-22. Moments later, Thomas spotted Weast again. Weast steered home set and match point, and it was over.

“A lot of great kills tonight,” Rogers said. “Hester and Dowling hammered balls at us. Weast, Vaughn and Gamewell hammered back.”

Hester, who had 15 digs and six aces in addition to those 29 kills, was dominating so much at one point that the Carson student section chanted “one-man team” at her, but she had some help.

Dowling had 16 kills and 21 digs. Pratt had 22 digs. Link had 18 assists and 15 digs. Allison Ennis had 25 assists.  Ennis was finding Hester a lot, which was exactly what the Falcons needed.

West coach Jan Dowling took a tough loss in stride, hopes her team will learn from it.

“You’ve got to bring your ‘A’ game when you’re in a match like this, and this was a night Carson wanted it more than us,” she said. “Vaughn played her tail off and Weast was great. Those two destroyed us.”

There’s a lot of volleyball left. Both teams control their destiny and if they win Thursday they’re conference co-champs.

Next on the schedule are the NPC tournament (Carson hosts the semifinals and final) and the 3A state playoffs, and the heat will be on again.