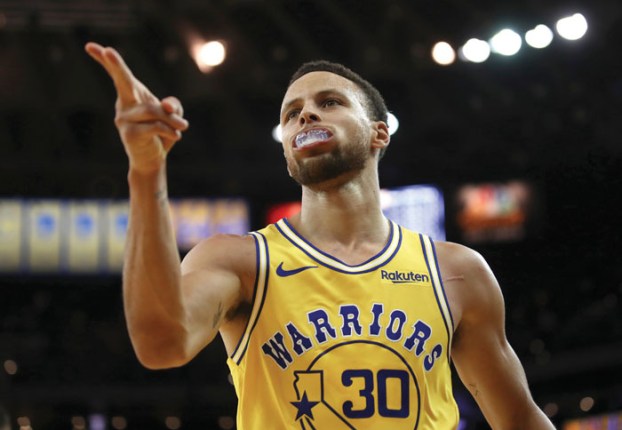 Golden State Warriors' Stephen Curry celebrates a score against the Washington Wizards during the second half of an NBA basketball game, Wednesday, Oct. 24, 2018, in Oakland, Calif. (AP Photo/Ben Margot)

By The Associated Press
OAKLAND, Calif. (AP) — Stephen Curry just shrugged and grinned as he kept lighting up the floor, scoring 51 points and finishing with 11 3-pointers in only three quarters of the Golden State Warriors’ 144-122 victory over the Washington Wizards on Wednesday night.
Kevin Durant added 30 points, eight rebounds and seven assists, and Draymond Green had 11 of his 12 assists in the first half to help two-time defending champions finish with 37 after dishing out 35 assists in a 20-point victory against Phoenix on Monday.
But this was all Curry’s show. No. 30 knocked down his 11th 3 of the night late in the third from 32 feet back and shrugged like no big deal whatsoever.
He scored 31 in the first half and finished with his sixth career 50-point game and made 10 or more 3s for the 10th time. The 51 points matched his most at Oracle Arena.
Bradley Beal bruised his sternum early then returned late in the first half and wound up with 23 points. Kelly Oubre Jr. scored 17 points off the bench for Washington.
JAZZ 100, ROCKETS 89
HOUSTON (AP) — Donovan Mitchell scored 38 points to lead the Utah over Houston in a game James Harden left with tightness in his left hamstring.
Harden headed to the locker room midway through the third quarter and didn’t return. He missed seven games last season with a Grade 2 hamstring strain and said this was not the same type of injury as that one.
With Harden out of the game after the Rockets pulled within five, the Jazz regained control, scoring the next 10 points to make it 94-79 and cruise to the victory.
Harden scored 29 points and Carmelo Anthony had a season-high 22 for the Rockets. Chris Paul finished up a two-game suspension for his role in a fight with the Lakers last week, and fellow starter James Ennis sat out with a strained right hamstring.
LAKERS 131, SUNS 113
PHOENIX (AP) — Short-handed Los Angeles gave LeBron James his first victory as a Laker with the romp over Phoenix.
James flirted with what would have been his 74th career triple-double, finishing with 19 points, 10 assists and seven rebounds before sitting out the fourth quarter. Lance Stephenson had 23 points, eight rebounds and eight assists, and JaVale McGee added 20 points.
The Suns’ Devin Booker had 23 points, seven rebounds and seven assists but left in the third quarter with a strained left hamstring. No. 1 overall pick Deandre Ayton had 22 points and 11 rebounds.
Los Angeles was without Rajon Rondo and Brandon Ingram for their roles in an altercation with the Houston Rockets on Saturday night. Wednesday night was the first of a three-game suspension for Rondo and a four-game suspension for Ingram.
RAPTORS 112, TIMBERWOLVES 105
TORONTO (AP) — Kawhi Leonard scored a season-high 35 points, Kyle Lowry had 13 points and 10 assists, and Toronto beat Minnesota to improve to 5-0 and match the best start in franchise history.
Jonas Valanciunas scored 16 points, Serge Ibaka had 15 and Norman Powell added a season-high 10. The Raptors also won five straight to start the 2015-16 season.
Toronto won its 15th straight home game against Minnesota, extending its franchise record for consecutive home victories over a single opponent.
Jimmy Butler scored 23 points for Minnesota.
NETS 102, CAVALIERS 86
CLEVELAND (AP) — D’Angelo Russell scored 18 points, Joe Harris added 16 and Brooklyn beat Cleveland, keeping the Cavaliers winless this season.
Trying to move on without LeBron James, the Cavaliers are 0-4 for the first time since losing their first five games in 2003-04 when James was a rookie.
Brooklyn outscored Cleveland 38-17 in the third quarter, forcing Cavaliers coach Tyronn Lue to use four timeouts in the period. Kevin Love, Jordan Clarkson and Collin Sexton had 14 points for Cleveland.
HAWKS 111, MAVERICKS 104
ATLANTA (AP) — Kent Bazemore scored 32 points, including a thunderous slam with just over a minute to go, and Atlanta overcame a 26-point deficit to stun Dallas.
Trae Toung added 17 points on a tough shooting night, bouncing back in the fourth quarter to help the youthful Hawks complete their comeback in a rookie showdown with Luca Doncic of the Mavericks.
Doncic finished with 21 points, but hit only 3 of 10 shots over the final two quarters.
The Hawks made it a night to remember at newly rechristened State Farm Arena, which hosted its first game after a $192.5 million renovation that was largely completed over the last two offseasons.
BUCKS 123, 76ERS 108
MILWAUKEE (AP) — Giannis Antetokounmpo had a triple-double with 32 points, 18 rebounds and 10 assists to lead Milwaukee past Philadelphia.
The Bucks improved to 4-0 for the first time since the 2001-02 season. Khris Middleton had 25 points, and Brook Lopez added 21. Joel Embiid scored 30 points for Philadelphia.
HEAT 110, KNICKS 87
MIAMI (AP) — Hassan Whiteside had 22 points and 14 rebounds, Josh Richardson added 21 points and Miami rolled past New York with a 45-point third quarter.
Rodney McGruder added 19 points on only eight shot attempts, and Goran Dragic had 13 points. Miami outscored New York 76-38 in the middle two quarters. Damyean Dotson led New York with 20 points.
BULLS 112, HORNETS 110
CHICAGO (AP) — Zach LaVine made two free throws with 0.5 seconds left to give Chicago its first victory of the season.
LaVine finished with 32 points for his fourth straight 30-point game to start the season. Cameron Payne scored all of his career-high 21 points in the second half, going 7 for 11 on 3 pointers for Chicago in the opener of the home-and-home set with the Hornets.
Kemba Walker had 23 points on 5-for-14 shooting for Charlotte.
PACERS 116, SPURS 96
SAN ANTONIO (AP) — Victor Oladipo had 21 points and Indiana led for all but the opening seconds.
Indiana led by 29 points at one point while handing San Antonio its first home loss.
DeMar DeRozan had 18 points to lead the Spurs, his lowest total since joining the team in an offseason trade from Toronto.
KINGS 97, GRIZZLIES 92
SACRAMENTO, Calif. (AP) — De’Aaron Fox scored 21 points including a leaning, one-handed dunk as part of a pivotal run late in the fourth quarter, and Sacramento beat Memphis.
Buddy Hield had 23 points, Willie Cauley-Stein added 15 points and 10 rebounds, and Nemanja Bjelica had 11 points and 11 boards for the Kings.
Mike Conley scored 27 points while Jaren Jackson had 14 points and seven rebounds for Memphis. Wayne Selden added 13 points.
___
More AP NBA: https://apnews.com/tag/NBA and https://twitter.com/AP_Sports