‘The players are already depressed about it’: Longtime Panthers… 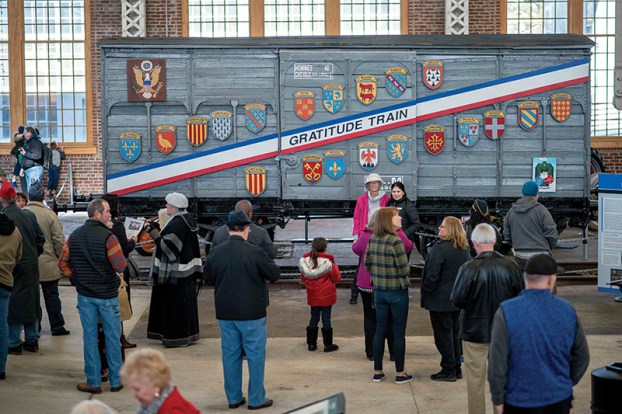 JON C. LAKEY / SALISBURY POST The 49 Days of Graditude celebration opening ceremony kicked of with an short parade through downtown Spencer that ended at the NC Transportation Museum. An opening ceremony was held in the Back Shop building with several speakers, music and static display of the refinished original 40 & 8 Box Car. Spencer, North Carolina 2/9/19

Be silly. Be honest. Be kind. 49 Days of Gratitude take off in Rowan County

SPENCER — For the 49 Days of Gratitude opening ceremony Saturday, keynote speaker Beth Troutman offered a message as inspiring as the Merci Train itself.

Troutman, probably best known for her work in local and national television, spoke of following your passion, being able to laugh at yourself and putting ego aside as ingredients toward a fulfilling life.

Be silly. Be honest. Be kind. Those were the Ralph Waldo Emerson words Troutman gave to the audience.

“I promise that will lead to a life of gratitude,” she said.

And it was gratitude that became the overriding theme for activities kicking off the 49 Days of Gratitude in Rowan County.

But this first day began on a somber note.

Clyde Miller, a beloved figure in northern Rowan County, was tabbed to be grand marshal of the opening parade through Spencer, but he was stricken Saturday morning as entrants assembled on 8th Street.

Rescue personnel worked diligently in trying to revive Miller, but he died at the scene. The military veteran was in his 90s.

The small, 30-unit parade, filled with many of Miller’s fellow veterans, started 43 minutes late. The vintage Packard Miller was going to be riding in still led the way, empty save for its driver.

Toward the end of Saturday’s opening ceremony, a special tribute was paid to Miller, maybe best known as a longtime member on the Rowan-Salisbury Board of Education as the North district’s representative. 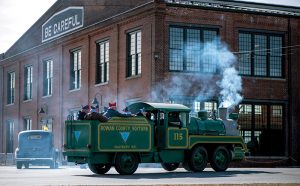 JON C. LAKEY / SALISBURY POST Members of the Rowan County 40 and 8 group ride to the NCTM in the back of the parade train. The 49 Days of Gratitude celebration opening ceremony kicked off with a short parade through downtown Spencer that ended at the NC Transportation Museum. Spencer, North Carolina 2/9/19

The 49 Days of Gratitude event draws inspiration from the story of the Merci Train and North Carolina’s 40-and-8 boxcar from that train, which arrived in Raleigh 70 years ago.

The boxcar is now a permanent and recently refurbished resident of the N.C Transportation Museum.

The people of France sent their 49-car Merci Train, or Gratitude Train, to the United States in February 1949 as citizens’ way of saying thanks for the American Friendship Train of relief goods that came to them in 1947.

Organizers for the 49 Days of Gratitude have taken that 1949 gesture as a springboard for events, programs and activities linked to Rowan County’s “Celebration of Thanks.”

But foremost is the ongoing distribution throughout the county of donation boxes, decorated with an image of the Merci Train boxcar in Spencer, that will collect supplies needed by various nonprofits in the community.

The boxes will be collected for the March 30 closing ceremony at North Rowan High.

Saturday’s opening ceremony, held next to North Carolina’s Merci boxcar, was conducted in the museum’s Back Shop.

The venue was filled with special guests, music, speeches and tributes, especially to veterans for whom maybe the biggest debt of gratitude from both nations is owed.

“You can’t help but be moved standing in front of this boxcar,” Troutman said.

The little railcar, the kind used primarily in World War I and capable of holding 40 troops or eight horses, is now a symbol of peace and solidarity for the French and U.S. people, said Anne-Lise Gallay, deputy cultural attache for the French Consulate in Atlanta.

From the Revolutionary War through World War II, the French and U.S. people “have been there for each other in times of war,” Gallay said.

“We are linked together, connected by a long-enduring friendship,” she said.

Dr. Kevin Cherry, of the state cultural resources department, noted that France stood as the United States’ first ally, providing supplies, men, ships and hope for the new experiment in self-government that the United States represented during the Revolution.

And it was the United States who provided help to France in the two world wars.

When it came to the Merci Train, the French people went through their homes finding knick-knacks and sit-arounds to say thank you to the people of the United States, “because that’s what friends do,” Cherry said of the items that filled each of the 49 cars, including the one which came to North Carolina.

Many of the French items from North Carolina’s Merci boxcar — one of 43 still existing from the Merci Train — are on display at the Transportation Museum.

It’s just a simple railcar, Cherry noted, “but we all know it’s much more than that.”

It commemorates a lasting bond between two nations and symbolizes all that was sacrificed by the people from both, Cherry said. As one of the final acts during Saturday’s opening, Spencer Mayor Jim Gobbel and Gallay walked a wreath of flowers over to the Merci box car.

Brigitte Helzer, a native of France and executive director in New England of the MDFDE Friendship Merci Train commemoration happening in Europe, said she learned her first English words from the American soldiers who liberated her French town in late 1944.

She and her family immigrated to the United States in late 1948 and a couple of months later, when she was 7, her family was invited to participate in the U.S. welcome of the Merci Train in New York.

Helzer said she was thrilled to be attending Saturday’s event n Spencer and still holds as a cherished memory the American soldiers she first met in France and their gifts of chewing gum and chocolate.

Also making the trip to Rowan County from Atlanta were John and Sue Stevens, who now own the Mercitrain.org website and Dottie Campbell of Gwynedd, Pennsylvania, a historian who has long held a love for the Merci Train and often gives talks about it.

Campbell said for her one of the most emotional gifts she has seen from the French people was a yellow arm band with the Star of David on it, the kind Jews were forced to wear during the German occupation and Holocaust.

In her talk, Troutman spoke of the many leaps of faith she has taken in her career.

They led her to becoming a production assistant on the “West Wing” television show, a candidate at 27 in North Carolina’s 8th District U.S. House race, a host of Charlotte’s “Fox News Rising,” a host for Lifetime’s “The Balancing Act” and the nationally syndicated “Right This Minute,” then an anchor for WCNC NBC 6 in Charlotte.

But it was caring for her terminally ill mother over her final weeks that eventually led Troutman to leaving the Charlotte station and looking for something else. 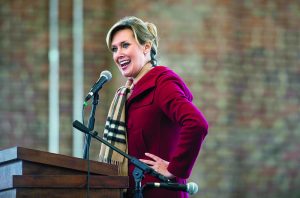 JON C. LAKEY / SALISBURY POST Beth Troutman was the keynote speaker for the opening ceremony. The 49 Days of Graditude celebration opening ceremony kicked of with an short parade through downtown Spencer that ended at the NC Transportation Museum. Spencer, North Carolina 2/9/19

Less than a week before she died, Troutman’s mother — a prim, proper, funny, quintessential Southern woman — told her daughter how she once had been stressing out about getting new drapes in the living room.

But she turned to Troutman and said, “All of this stuff is just junk. The only thing you take with you is love.”

Troutman said she returned to her anchor desk in Charlotte and realized most of what she was reporting on was crime and the worst things happening. She felt as though she were a voice of fear, not love.

She walked away from the anchor’s job and within eight days was helping in an orphanage in Haiti. There she witnessed the kind of poverty she had never seen before, yet the people were full of kindness, generosity, love and gratitude.

She knew it was important to share her experience, leading to a series of documentaries that won Troutman two Emmys.

Troutman said she learned gratitude takes action and reminded her audience again to be silly (not take themselves too seriously), be honest and be kind.

“I promise that it will lead to a life of gratitude,” she said. “The only thing that matters is love. The rest is junk.”