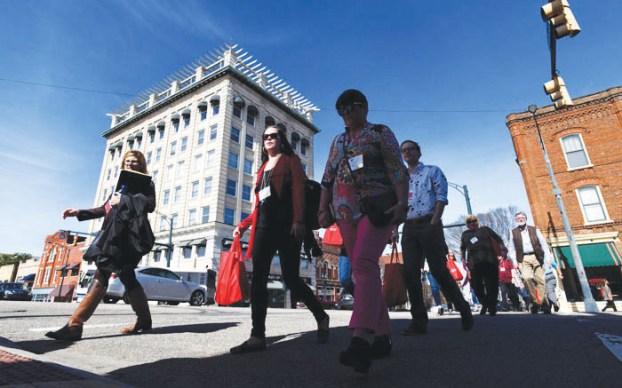 1. Speaking at the N.C. Main Street Conference in Salisbury last week, Gov. Roy Cooper reminisced about selling watermelons, picking up a drugstore soft drink and getting a haircut as a kid on the Main Street of what small North Carolina town?
A. Ahoskie
B. Nashville
C. Carthage
D. Danbury

2. Which of the following did participants in the N.C. Main Street Conference not do?
A. Saw examples of downtown residential living
B. Heard about the Empire Hotel project
C. Toured Novant Health Rowan Medical Center
D. Learned about Salisbury’s arts districts.

3. Diane Young, who lives in downtown Salisbury, won an N.C. Main Street Champion Award for her work heading a downtown development corporation for what other city?
A. Mooresville
B. Lexington
C. Concord
D. Albemarle

5. “Buy One, Give One” was the rallying cry for what local fundraiser over the past week?
A. Kiwanis Pancake Festival
B. Meals on Wheels Rowan’s barbecue
C. Rowan Helping Ministries’ Pass the Plate
D. 49 Days of Gratitude’s fish fry

8. “The best thing I like about America is they help you help yourself,” said Eunice Gladey, who recently became a U.S. citizen with the help of Char Molrine and the Rowan Literacy Council. What is Gladey’s home country?
A. Honduras
B. Argentina
C. Sudan
D. Liberia

9. Pulitzer Prize-winning novelist Robert Olen Butler was the guest for the 33rd annual Brady Author’s Symposium at Catawba College. When describing the writing process, Butler often speaks of this as part of an idea, or that making order of this is an art, or that tuning into this expands the world. What word is he talking about?
A. The “hum”
B. The “drum”
C. The “scrum”
D. The “thrum”