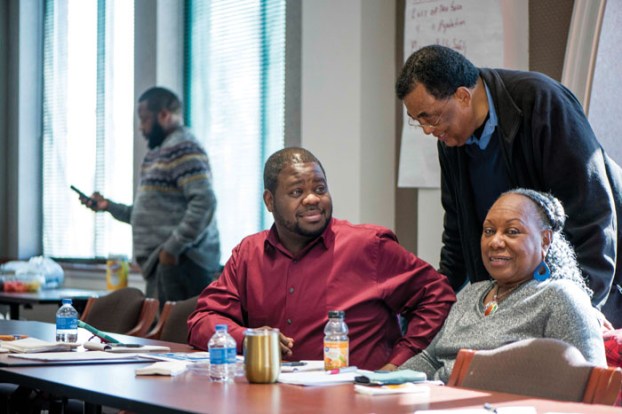 Tony Hillian (seated, left) is an alderman for the Town of East Spencer. Recently the town held a yearly retreat to discuss town projects. Hillian talks with fellow board members John Noble (standing) and Deloris High (right) during a break. — Photo by Jon C. Lakey

Spirit: ‘Serve people and help somebody’: Tony Hillian is passionate about youth, community

EAST SPENCER — Since his youth, Tony Hillian has followed in the footsteps of a family of community leaders, but as an adult, the East Spencer native has continued to forge his own path as a community leader.

In 2017, Hillian, 44, made his first leap into an elected office and was voted onto the East Spencer town board.

“God gives me the strength to do this,” he said quickly.

In his first year in office, Hillian said he’s learned this position requires his undivided attention, focus and most of all integrity.

He admitted his first year went by fast, but said he’s grateful and excited about the work ahead.

Hillian said he enjoys engaging with people in the community, but does desire to see more people take an interest.

“The meeting hall should be packed every month,” he said.

He said if getting residents to meetings means he has to knock on doors and talk face-to-face to explain the issues at hand, then he’ll put in the sweat equity.

“Sometimes you have to bring the meeting to them,” he said.

Hillian was first thrust into the public spotlight at 14 when his uncles Darrell and Kenneth began an anti-drug focused drill team. The team was formed in 1987 with about 20 young men and expanded to over 150 youth and became co-ed.

The drill team opened the door for various opportunities that included taking part in an episode of BET’s Teen Summit and an assortment of civic awards and accolades.

He attended Rowan-Cabarrus Community College and realized early on that that learning environment wasn’t a good fit for him. He would go on to receive a bachelor’s degree in business from Shaw University in 2013 and in 2018, he received a masters in business from Strayer University.

Hillian has held a number of jobs within the East Spencer and Salisbury communities, most of which have involved working with youth.

He began a program, Boys to Men, through the Rowan County Housing Authority, which was held at Weant Street Apartments and focused on manhood training.

He then landed a job in 1999 as an activity director for the then-Paul Dunbar Resource Center. While there, he began an after-school program. He said most of the youth were interested in basketball so he made a deal with them — homework and community service before play.

Hillian said he loves working in the community, “just seeing where I was needed.”

He coached Amateur Athletic Union (AAU) basketball, within the police athletic league, as well as the Youth Basketball of America (YBOA) for more than 16 years.

Hillian said, in the beginning, he didn’t know anything about basketball, but it was more important for him to be a mentor for young men than a skilled coach.

“I ask God to show me the way. My duty was to serve people and help somebody. If you just help one, then your living is not in vain,” he said.

Hillian then became a volunteer for the North Rowan High School girls basketball team and then became head coach for six years.

In July 2018, Hillian was hired with the City of Salisbury as a recreation aide.

A very important part of life for Hillian is Sunday dinners with family. It’s often he’ll get a phone call asking “who’s cooking?” he joked.

“Without family, you don’t have support,” he said.