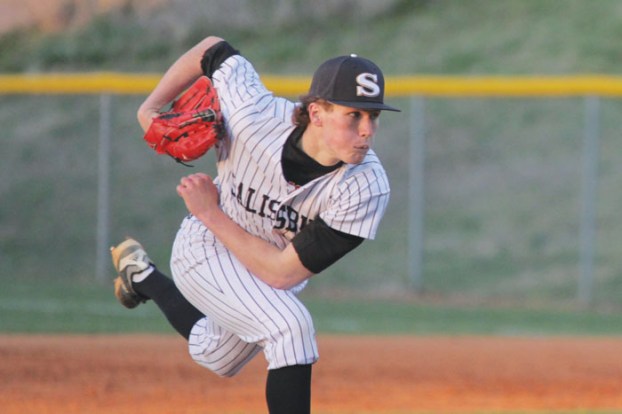 Submitted photo ... Salisbury’s Jack Fisher pitched very well at Ledford on Thursday night and left in a 1-1 deadlock. He struck out 12 batters in five innings. Ledford went on to win, 2-1.

WALLBURG — One night after being thrashed by Ledford, 25-1, one of the worst losses in school history, Salisbury’s baseball team came close to knocking off the unbeaten Panthers on Thursday.

Salisbury took a lead into the fifth inning before losing, 2-1, in the Central Carolina Conference contest.

Ledford’s Chris Villaman, an N.C. State signee, is rated as one of the top five high school left-handers nationally and is a certain high draft pick. He was matched pitch-for-pitch by Salisbury’s Jack Fisher, a lefty headed to UNC Wilmington.

Fisher’s no-decision was brilliant. He threw 83 pitches, 55 which were strikes. He threw a first-pitch strike to 15 of the 20 hitters he faced.

The big southpaw struck out 12, walked one and hit one (Villaman). Fisher allowed two hits. The run he allowed was unearned.

Villaman fanned 11 Hornets (9-7, 7-5) in five innings, before giving way to closer Will Bethune, who earned the win with two shutout innings.

Fisher struck out the side in the bottom of the first.

Coach Mike Herndon’s Hornets took a 1-0 lead in the second. Archie Dees got an infield hit and stole second base. With two men out, Sam Combs had a great at-bat. He fouled off four 2-and-2 pitches before lining a single to left field to score Dees.

Fisher took a no-hitter to the bottom of the fifth, but the inning started with back-to-back singles. After an error by Combs at third base on a bunt, it was 1-all, and the Panthers had runners at second and third. Fisher kept it 1-all, with his final two strikeouts and a groundout. Combs made the throw across the diamond to first baseman David Holden for the third out.

Bethune got the Hornets out in the top of the sixth inning, and Bo Rusher (3-1) took the mound for the Hornets for the bottom half. Rusher pitched carefully to Villaman, who smashed two homers in Wednesday’s game, and walked him to start the inning. Villaman stole second when the Hornets tried to pick him off. Then he scored the decisive run on Carson Shetley’s base hit.

Bethune took care of the Hornets, 1-2-3, in the seventh inning, and it was over.

Vance Honeycutt and Dees had two hits each for the Hornets. Parker Lippard stole three bases, while Dees and Honeycutt swiped two each.