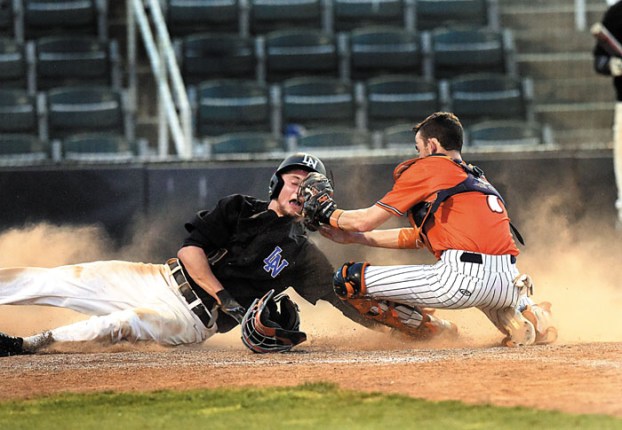 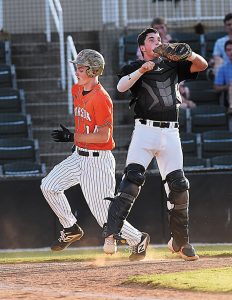 KANNAPOLIS — Carson’s baseball team is a bridesmaid again — and an unsightly one at that.

For the third straight year, the Cougars lost in the F&M Classic championship game, this time falling 13-2, in five innings, to Lake Norman here Wednesday night.

The folly-filled loss was Carson’s first since March 29. The Cougars (20-3) committed five errors, were on the wrong end of a seven-run inning and had their second 10-game winning streak snapped.

“What usually wins is pitching and good defense,” infielder Cole Hales said. “We didn’t bring any of that today.”

Lake Norman (20-4) knocked out 10 hits, half of them for extra bases, in just four innings against a quartet of Carson pitchers. Starter Aaron Misenheimer survived only two-plus innings and was waxed for five runs on six hits. Most damaging were home runs by Lake Norman’s Cameron Arnold and Gage Smith.

“We made him get the ball up in the zone,” said winning coach Ty Wigginton, a former utility infielder for eight major league clubs. “And when he did, we didn’t miss him.”

Misenheimer (5-1) ran into trouble almost immediately. With one away in the last of the first, he surrendered Vance Anderson’s triple to the left-centerfield gap, Carson Arnold’s run-scoring bloop double to right and Smith’s RBI-single up the middle.

“We were a play or two from getting out of it,” Cauble said. “We didn’t make plays that we normally make, but they would have been tough plays. The little blooper to right field, we just got a bad jump on it. If we catch that, maybe they score no runs.”

Carson tied the score with two unearned runs against left-hander Dylan Arment in the top of the second. No. 9 hitter Ryan Street and Hales each delivered run-scoring singles to right with two out. Lake Norman reclaimed the lead when Cameron Arnold drove Misemheimer’s second pitch of the second inning into the right-field bullpen.

“They came out ready to play,” said Hales. “Jumped on us in the first inning, got another one in the second and forced us to play from behind the whole game. That’s usually what we do to teams. It’s just tough to win when you give up big innings.”

It got worse in the last of the third, when the Wildcats sent 12 batters to the plate and scored seven times. Gage contributed a two-run homer and a two-run double to the rally. Carson contributed three errors, which led to four unearned runs.

Arment (4-2) relied on an effective, parachute change-up and limited Carson to three hits over five innings.

“He wasn’t overpowering or anything,” said Carson batsmith Luke Barringer. “But he had us lunging at that change-up all game.”

Arment retired nine of the last 12 men he faced — and benefited from a well-executed 9-2 double play that thwarted the Cougars’ fourth-inning scoring chance. Garrett Alewine laced a double down the right-field line and was replaced by courtesy runner Blane Roberts. With one down Street lined out to Rudd Ulrich — a junior who has drawn interest from UNC-Charlotte. Ulrich’s one-hopper to the plate caught Roberts with room to spare.

When it ended, the Cougars watched from a distance as Lake Norman accepted the championship trophy for the second time in three years.

“Three (years) in a row we got beat here,” said Barringer. “It’s not the record we want. Still, we got to the finals and played well up until this point. Hopefully, we can put it back together and play for something that matters even more.”

Cauble agreed. “Baseball’s a game of inches,” he said. “And the inches went the wrong way tonight. We messed up, they made us pay. This could be a blessing that refocuses us for the remainder of the year.”

NOTES: Lake Norman extended its winning streak to 11 games. … Smith finished 3-for-3 with a walk and five RBIs. … Carson hadn’t been mercy-ruled since April 13, 2010, when it lost 10-0 to East Rowan. … The Cougars are idle until next Wednesday, when they meet either North or South Iredell in the second round of the North Piedmont Conference tournament at West Rowan. East Rowan also has a first-round bye.