As strong as concrete: Charles Newsome keeps building on…

SALISBURY — With a few dozen people watching in downtown Salisbury, artists from across the region helped raise money for the city’s graffiti park while also competing for a $500 commission. 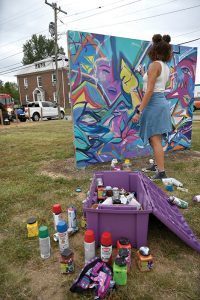 Josh Bergeron / Salisbury Post – A collection of paint cans is strewn behind Makayla Bitner on Saturday as she paints during the Graff Park Paint Jam at Salisbury’s downtown graffiti park. Bitner was one of several artists who painted during the event.

So, after some prodding from DJ Mon-Te, who provided music for Saturday’s fundraiser, Pierce contacted Salisbury Parks and Recreation’s Vivian Koontz, the department’s event coordinator, to work through logistics.

On Saturday, there was music, T-shirt sales, food and electricity thanks to a generator on a Salisbury Fire Department truck.

A few dozen people were at the graffiti park at any one time, with folks filing in and out. Organizers said they were pleased with the turnout. And Pierce said the turnout Saturday is proof that Salisbury is interested in and excited about graffiti art.

With help from the money raised, Pierce said he would like to see a small concrete wall that’s at the back of the park raised by about 6 feet, which would create a large, flat surface on which artists could paint. At present, artists have several large wooden boards positioned throughout the park.

“If you go to any other city where there’s a park like this, you’ll have a concrete or brick wall,” Pierce said.