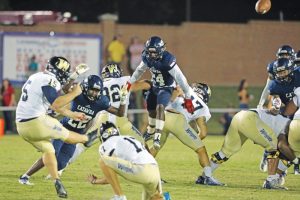 SALISBURY — Catawba’s bend-but-don’t-break defense kept the Indians in the game all the way against unbeaten and 17th-ranked Wingate on Saturday, but that was slim consolation.

McLean Robertson’s 34-yard field goal with 38 seconds left lifted the Bulldogs to a tense 13-10 victory at Shuford Stadium. Wingate, which also has beaten Carson-Newman, improved to 4-0 overall and 2-0 in the South Atlantic Conference. The Indians dropped their league opener and fell to 1-3 overall.

Catawba’s frustrations against one of its bigger rivals continued. Wingate has won eight of the last nine meetings. Catawba still hasn’t beaten the Bulldogs at home since 2007.

Wingate enjoyed a substantial statistical advantage, racking up 444 yards and 27 first downs to Catawba’s 273 and 15. Wingate was 13-for-18 on third-down conversions, terrific efficiency which made the difference.

The Bulldogs boasted a pair of  100-yard rushers in Domenike McNeill and Kalen Clark and were able to string together a number of grinding, clock-chewing marches.

The most critical of those drives began shortly after Catawba, with the game tied 10-all, failed to convert on a third-and-5  pass at the Wingate 43.

Clayton Crile punted superbly to the Wingate 7, but even though they were staring at 93 yards of Kirkland Field with 6:55 remaining and moving against a confident defense, the Bulldogs did what they needed to do.

Catawba had a chance to stop that decisive drive before it got under way, but Wingate QB Shaw Crocker converted third-and-5 from the Wingate 12 with a 19-yard completion to R.J. Mobley. That got the Bulldogs out of the hole.

There was another third-down conversion to Mobley as Wingate pushed past midfield, and the Bulldogs weren’t halted until they reached the Catawba 17 in the final minute. From there, Robertson, who had missed two field goals earlier, was successful on his clutch kick.

Wingate scored on its opening possession, with McNeill pounding the ball eight times on an 11-play drive that yielded a 7-0 lead.

Wingate rolled all the way to the Catawba 3 on its second possession, but the Indians made a stand. Robertson’s field goal gave the Bulldogs a 10-7 lead early in the second quarter, and that was still the score at halftime. Crile missed a 38-yarder in the second quarter that would loom large as the game progressed.

Crile missed from 50 yards early in the second half, but Robertson failed from 37, and the scoreboard remained unchanged.

Catawba finally made it 10-all with 3:34 left in the third quarter when the Indians accepted the 20-yard field goal when they faced fourth-and-goal from the 3.  Davis’ 46-yard connection to Rose and a 21-yard run by Demonte Good to the Wingate 7 put the Indians in the red zone.

Early in the fourth quarter, Wingate appeared to on the verge of scoring a touchdown, but on a first-down run from the Catawba 11, Adam Rowson caused a fumble and fellow linebacker Jeremiah Ferguson made the recovery for the Indians.

That stop led to the Catawba drive that moved the ball to the Wingate 43. Then Crile’s punt pinned the Bulldogs back on their 7, but they refused to stay pinned.

After Wingate’s decisive field goal, Catawba was in a desperate situation. After Rose returned Wingate’s kickoff to the 23, Davis managed to get the ball out to the Catawba 37 with a completion to Chylon Thomas, but a 12-yard sack by Cal Hanford ended the Indians’ hopes.

Davis threw for 168 yards, with Rose collecting 91 on four receptions and Thomas accounting for 54 on three catches. Good rushed for 59 yards on 18 carries,

Free safety Brenden Westbrook made 16 tackles for the Indians. Cornerback Cris Page had 11 tackles (two for loss) and four breakups.

Catawba plays at Limestone next Saturday.